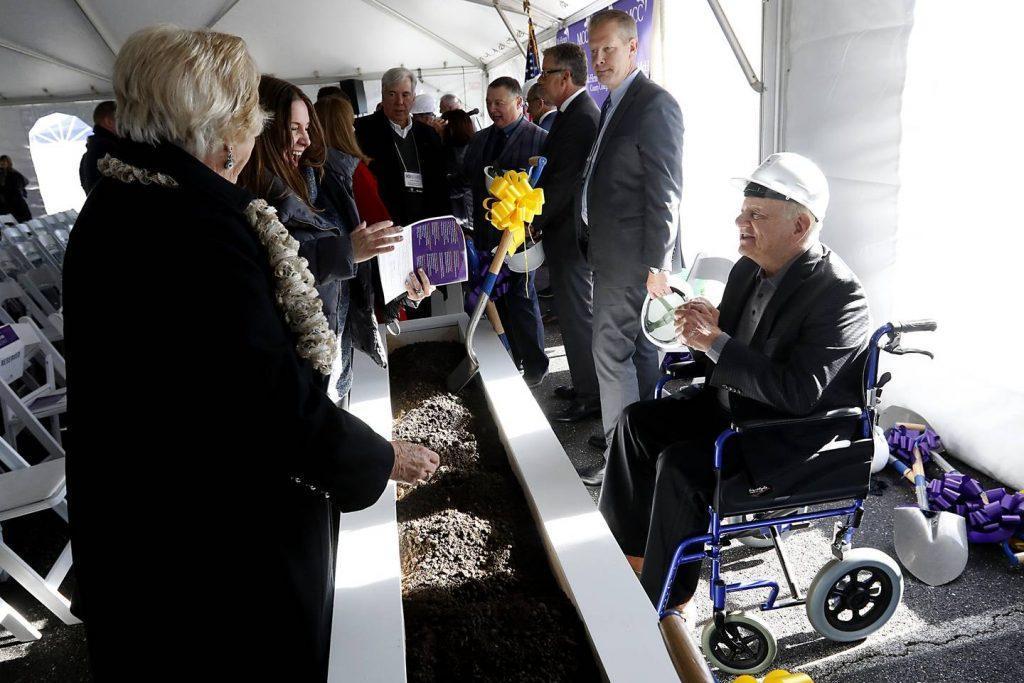 After years of planning and some delays in the schedule, the Foglia Center for Advanced Technology and Innovation at McHenry County College has broken ground.

Around 200 people, including college staff and manufacturing officials from across the area, as well as state and county representatives, packed their way into a tent at the Crystal Lake campus Wednesday morning to talk about the importance of job training in the area and pose with shovels and dirt to commemorate the start of the project.

“We’re going to build something like a cathedral,” MCC President Clint Gabbard said in his remarks.

Former Sage Products Chairman and CEO Vince Foglia – the vice president of the Foglia Family Foundation, which donated about $2.2 million toward the project – said he took his business to McHenry County in 1980 and originally came in pursuit of a “strong workforce.” He compared the importance of those who will learn in the new center to that of a Harvard lawyer, asking “What does the community need more?”

“This tech center is something that we’ve always needed,” he said. “We’ve always had a problem finding people who can fix things. … As far as I’m concerned, it’s a profession.”

The project will be centered around training for manufacturing and technology-based jobs, according to an event brochure. It will include welding labs, a community makerspace, and a small business incubator, and have a focus on creating a sustainable campus footprint, among other things.

The need for such training centers was something many, including Scot Forge CEO John Cain, said in their remarks. Cain pointed to several statistics – including one from consulting firm Korn Ferry that about 90% of surveyed businesses said it’s difficult to find and hire the right talent – to illustrate the growing skill gap in the workforce, as many jobs are continuing to demand and require new skills.

“While others around the country point to a lack of depth in the workforce, … [McHenry County] did something about it.”

McHenry County Board Chairman Mike Buehler, R-Crystal Lake, said the building will be a perfect example collaboration between the private and public sector.

The county in recent years has put a focus on helping support job training programs, particularly in the manufacturing sector, and is helping fund some of the equipment for the center, Buehler said.

Earlier this year, the McHenry County Board approved a $1.69 million grant for the college as part of its Advance McHenry County program, MCC spokesperson Christina Haggerty said in March.

“We’re happy to be involved,” Buehler said. “We look forward to the results for generations to come.”

State Rep. Suzanne Ness, D-Crystal Lake, said having the center in the county will make training more accessible for those who are interested and need it.

“It helps build the workforce locally that will be able to fill those needed jobs,” she said. “We need it everywhere, all over the state. I’m just happy we have it in McHenry County.”

The project’s $22 million total will be mostly funded by the state, with the state of Illinois picking up 75% of the bill, according to the MCC brochure.

Construction is slated to begin in January, with completion expected in spring 2024, the brochure states. Originally, the plan was to launch construction earlier this year and open in the fall of 2023.

“It’s so exciting that this is really in our backyard,” he said. “The city is absolutely behind this project and MCC because it benefits the community.”