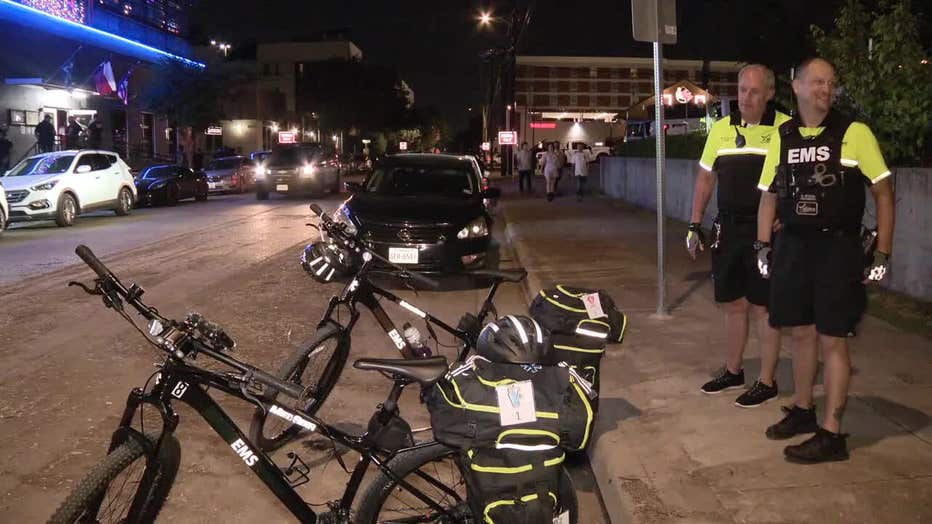 MedStar using medics on bicycles to better respond to calls

FORT WORTH, Texas – New data highlights an ongoing strategy that medics on bicycles are creating in Fort Worth’s entertainment district.

Every weekend, thousands of people enjoy an evening at Fort Worth’s West 7th Street District, but with that many people — and often alcohol involved — comes an increase in emergencies.

“It is very difficult at 1, 2 o’clock in the morning to get an ambulance down here,” explained Matt Zavadsky, with MedStar. “Really, to get even police cars, which is why you see the police department here on bicycles.”

Since 2018, MedStar has been working on a partnership with Fort Worth PD. It brings medical care to the entertainment district by way of bicycle.

“They will dispatch us from here to the call,” Zavadsky said.

MedStar said it typically responds to more than a few medical calls in the area on weekend evenings, but there’s often no need for an ambulance.

“And quite frankly, it was tying up a lot of ambulances from patients who were often treated and released from the scene,” Zavadsky said.

MedStar said, even on bicycles, it’s equipped just like an ambulance.

New data shows, since 2018, they have treated roughly 500 patients.

“And again, that’s 500 ambulance calls that we didn’t have to respond to right away. We get assessment on scene, decide if we need an ambulance,” Zavadsky added. “More than half the patients that we see down here on Friday and Saturday nights, we are able to treat and release right here at the scene without them having to go to the hospital.”

That frees up resources for more serious calls, while building relationships on the ground.