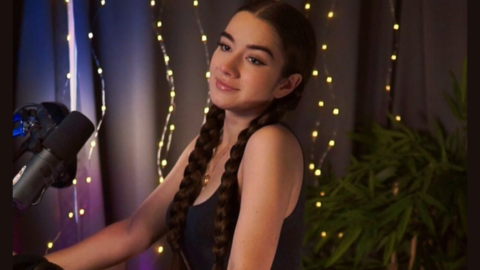 While beating a From Software game is an accomplishment in itself, some streamers have decided the grueling gameplay isn’t enough to quench their thirst for challenge and have taken it upon themselves to up both the difficulty and stakes. This includes MissMikkaa, a variety streamer from Stockholm, Sweden whose impressive accomplishments in From Software’s most recent title, Elden Ring, have circulated both TikTok and Twitter recently.

Mikkaa’s feats include besting some of Elden Ring’s most challenging bosses using a PlayStation 5 controller with just one hand. Recently, she even answered the call to take down her opponents using a dance pad, completely eliminating her ability to turn the game’s camera. GameSpot reached out to Mikkaa to ask her about her history with From Software, challenging runs, and how she ramped up her skills to accomplish such daunting tasks.

GameSpot: So first things first, can you tell me a little bit about yourself?

I’m a variety streamer and cosplayer from Stockholm, Sweden and have been streaming on Twitch for seven years now. I stream a lot of Elden Ring at the moment, with different challenge runs and fun stuff! I’ve been a gamer for most of my life and my all time favorite games are Age of Empires 2, The Elder Scrolls IV: Oblivion, Dark Souls, and The Witcher 3: Wild Hunt. I also have a little Shiba Inu pupper named Yoshi, who makes appearances on the stream from time to time.

What is your experience with From Software games?

Mikkaa: I started playing From Software’s games back when I was new to streaming in 2015 after a friend recommended Dark Souls to me. I fell in love with it right away! As much as it could be frustrating and difficult, it was also extremely rewarding when you finally strike the killing blow on a boss. After completing Dark Souls, I quickly moved on to Dark Souls 2, Demon’s Souls, Bloodborne, Dark Souls 3, Sekiro, and, lastly, Elden Ring.

What is your experience with doing challenging game runs, such as playing them one-handed or using a dance pad?

Mikkaa: Besides going up to NG+7 in most of From Software’s titles, I have played several challenge runs in Dark Souls 3 prior to Elden Ring. They have mostly consisted of level 1 challenges with increasing difficulty by going up to NG+ while also excluding armor, shields, magic, and other helpful tools. I did a “no healing” run in Dark Souls 3 as well.

In Elden Ring, I have completed Rune Level 1, No Death, One Hand, One Hand Rune Level 1, and Dance Pad-only runs. All of these runs have been All Remembrances and No Summons/Spirit Ashes, which means I kill the hardest boss in the game: Malenia. I usually kill all the generally considered “hard bosses,” even if they are not included in the All Remembrances category. Some examples are: Caelid Bell Bearing Hunter, Duo Crucible Knights, and Alecto. Right now, I’m currently working on my next challenge: Dance Pad level 1.

How many hours do you think you’ve put into Elden Ring so far?

Mikkaa: I have about 800 hours in Elden Ring at this point.

What inspired you to begin doing these challenging Elden Ring runs?

Mikkaa: I’ve always enjoyed finding new ways to challenge myself in games! Occasionally I call myself a “lazy gamer,” as I sometimes purposefully ignore a game mechanic that I find tedious–this can be stuff like leveling up or using skill points. I also find myself inspired by other people, such as other content creators or community members, who find different ways to challenge themselves in games.

What has been the most difficult part of the experience for you? What is surprisingly the easiest?

Mikkaa: One of the hardest parts of the Dance Pad challenge specifically was making sure I don’t fall off every cliff! Since the movements were so clunky, and the camera controls almost non-existent (I was limited to only controlling the camera with the targeting button), it was fairly common for me to fall off the map. Also bosses with multiple targets were tricky due to the camera controls. Rennala, for example, was a pain due to her “sweetings” in phase one, and in phase two you lose your targeting on her each time she summons. This led to a lot of deaths due to not being able to locate Renalla and getting a Comet Azur in my back.

The dance pad is limited due to it only having 10 buttons. This means I would have to switch keybinds fairly often to accommodate for different fights or environments.

Using a completely different controller or method in which you play the game forces you to re-learn the muscle memory you once had from scratch. While this is difficult in and of itself, I was actually surprised at how well I adapted to this aspect. It would take me a couple of streams of struggling a bit, but then I would get into it fairly quickly.

How about your favorite part?

Mikkaa: My favorite part about doing these runs is seeing how much I’ve inspired others! It’s really heartwarming to read comments about how people are interested in my runs and how some even want to try doing similar challenges. It’s really cool!

What Elden Ring boss gave you the hardest time and why?

Mikkaa: Malenia is undoubtedly the hardest boss for me in these challenge runs. She can be so punishing with her healing every time she hits you, and don’t even get me started on the Waterfowl Dance. Even without adding any extra self-imposed difficulty conditions to her fight, I find her quite the challenge. My first time killing her while playing normally with a controller took me around 329 tries and 15 hours.

What advice would you give others looking to do challenge runs?

Mikkaa: The best tip I can give to someone who is looking to do a challenge run would be to try to see that failing is the only way to learn. In Souls games, death is not necessarily a bad thing; it instead gives you the tools to conquer the challenge. Instead of feeling disappointed when you fail, you should see it as a learning opportunity.

And finally, in your opinion, what is the absolute best Elden Ring build?

Mikkaa: The best Elden Ring build in my opinion is definitely two Bandit Curved swords with Seppuku! This build works wonders for all bosses that bleed. If the bosses do not bleed, then you just change it to Fire, Keen, Cold, or Occult affinity depending on your build. The best part about curved swords is that they are so light that they work well for a level 1 run, without forcing you to also play a naked character due to weight issues.

I usually get the Scaled Armor set since it’s not too heavy if you upgrade Endurance a bit. Generally speaking I just wear something that keeps me in the medium weight class so I don’t have a “fat roll.”

Talismans vary a lot! But for level 1 runs, I pretty much always go for the Ritual Shield Talisman to ensure you don’t get one-shotted by everything mid/late game. Some personal favorite talismans for challenge runs are: Radagon’s Soreseal, Ritual Sword Talisman, Millicent’s Prosthesis, and Dragoncrest Greatshield Talisman.