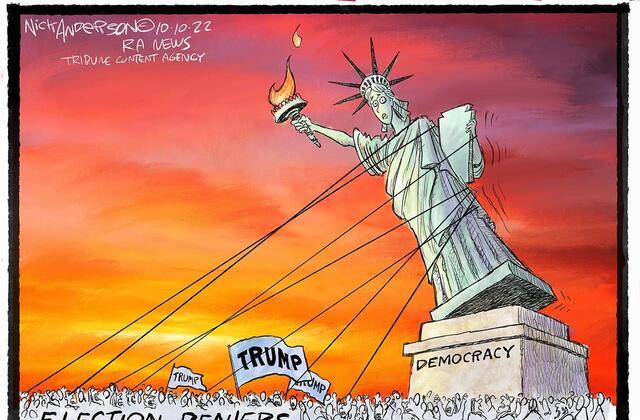 MINNEAPOLIS (AP) — A Minnesota man pleaded guilty Tuesday to filing fraudulent insurance claims for a staged arson he attempted to portray as a politically-motivated attack.

Federal officials said Denis Molla, 30, of Brooklyn Center, falsely reported to law enforcement in September 2020 that someone had lit his camper on fire and that three unknown males were near his home when he heard an explosion.

Molla told officials his garage door was vandalized with a spray painted Antifa symbol and words stating “Biden 2020″ and “BLM.” He claimed his camper was targeted because it had a Trump 2020 flag displayed on it.

Police discovered that Molla started his own property on fire and spray painted the graffiti on his own garage. He them submitted multiple insurance claims seeking coverage for the damage to his garage, camper, vehicles, and residence caused by the fire, court documents show.

Molla also created and allowed others to start two GoFundMe accounts to benefit Molla and his family. In total, Molla submitted more than $300,000 in fraudulent insurance claims, of which he received approximately $61,000 from his insurance company. Molla also received more than $17,000 from individual donors via GoFundMe.

Molla pleaded guilty to one count of wire fraud.