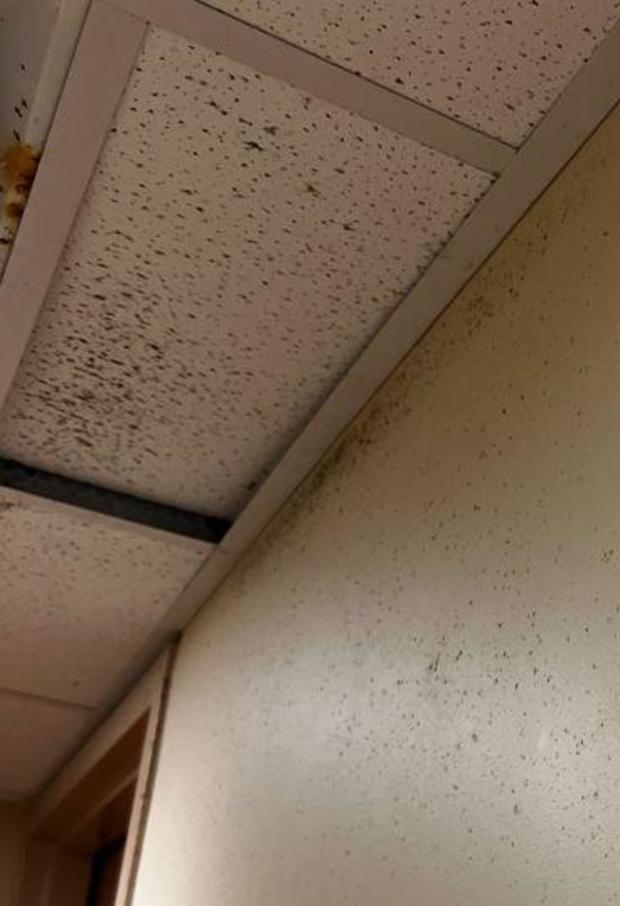 About 1,100 soldiers will move out of more than a dozen mold-infested barracks at Fort Bragg in the coming weeks, but several current and former soldiers told CBS News those are not the only barracks with mold — and not all soldiers are getting the chance to move out of moldy housing.

Two soldiers, who are not being relocated, spoke to CBS News on the condition of anonymity out of fear of retaliation about the mold that is also growing in their barracks. One soldier described it as “black specks all across the furniture and across the walls'” that spread within a week.

One sent along pictures from the past few days showing the issue covering furniture, ceiling tiles and a wall:

And this one of a heating, ventilation, and air conditioning room from July of 2021:

One of the soldiers said he felt it was a “punch to the gut” that soldiers at barracks near an area on the North Carolina installation known as Smoke Bomb Hill will relocate while other soldiers at other barracks facing similar problems are expected to stay.

According to the Centers for Disease Control and Prevention, mold can cause symptoms like a stuffy nose, wheeziness, red or itchy eyes, and people who have allergies to mold or have asthma can have more severe reactions like fever and shortness of breath.

Fort Bragg acknowledged the extensive mold in barracks near Smoke Bomb Hill in early August after an inspection by Army leaders found substandard conditions. Fort Bragg in an email told CBS News the Army plans to demolish and rebuild 12 of those barracks and renovate five of them.

The barracks, which were built in the mid-1970s, have gone through continuous repairs, and the repairs, as well as changes in air flow, have created “higher than normal moisture levels and quality of life concerns,” a spokesperson for the installation said in an email last week.

As of Wednesday morning, more than 100 soldiers had moved out of the barracks near Smoke Bomb Hill. Some of the affected soldiers are from units in 1st Special Forces Command, and units with XVIII Airborne Corps, including the 20th Engineer Brigade, and 35th Corps Signal Brigade.

Mold is not a new problem for Fort Bragg. Last year, Sen. Thom Tillis, Republican of North Carolina, sent a letter to the secretary of the Army calling attention to the issues he had heard about from soldiers. He wrote that “allowing soldiers to live in moldy and unsafe housing is a danger to the country.”

Josh Butler, who retired as a sergeant from the Army earlier this year, used to manage about 340 rooms in barracks at Fort Bragg. The buildings he oversaw were not near Smoke Bomb Hill but still had extensive mold problems.

He told CBS News, “If guys weren’t in their rooms constantly maintaining their rooms, we would have black mold in them in like a week.”

Butler, who was a facilities manager at Fort Bragg for roughly three years, said he repeatedly raised the issue – especially to the Department of Public Works at Fort Bragg and to installation leadership.

“There’s serious emotional impacts that people can have in this line of work, and then you put them in a room that has mold issues alone. It’s no way to live. It’s completely substandard for the guys,” Butler said.

Fort Bragg did not respond to a question on the extent of the mold problem across the installation but is holding a media roundtable Friday with Army leaders to address concerns.

In a statement, a Fort Bragg spokesperson said, “Our enduring obligation at Fort Bragg and as Army leaders is to take care of our people – our Soldiers and their Families. Their health and welfare is of the utmost importance to our Army readiness.”