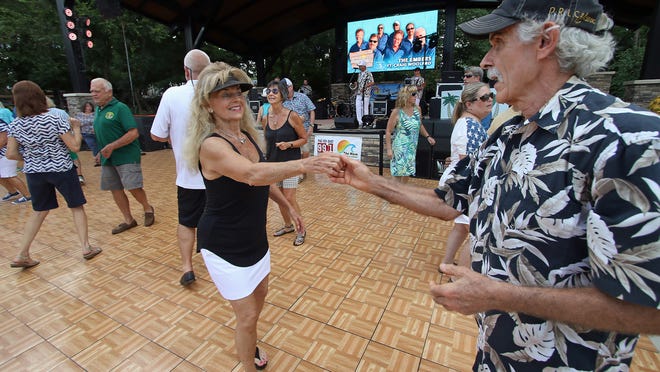 Kings Mountain’s annual Beach Blast festival drew in crowds of people from all over the region and beyond last weekend.

The event, held at Patriots Park, is a two-day free concert with beach bands, food and games.

“I help every month,” said Michelle Crawford who has been volunteering with the city every month for the summer Cruise-In Concert series held in Kings Mountain from May to October.

“We’ve had people come from as far away as Maine,” she said. “Everyone comes from everywhere.”

She said more than 40,000 people were drawn in for the Fleetwood Mac tribute concert, and they expect even more for an upcoming Prince impersonator who will be performing in the future.

Crawford said the nearby Kings Mountain casino has been promoting the concerts and festival, which has helped bring in people from all over.

She said this year’s event has been great, and she’s met all kinds of people from as far away as New Orleans to Charlotte, Gastonia, Boone and Cornelius.

She said the line for Scoops, the ice cream shop, was all the way out of the door and down the sidewalk.

“People are talking about it,” she said. “It is really bringing an economic feel for this area. It’s neat.”

Kids played in water at the splash pad, music throbbed in the background, and a girls dance team performed near the pavilion.

Vendors lined the sidewalk selling everything from quilts, to home products, jewelry and beauty products.

Mavis Scully, with Sigmon Theatrical, walked around with two fish mascots. She said the company had several pirates, mermaids and a stilt walker circulating in the crowds providing live entertainment.

“We love being here,” Scully said. “Kings Mountain is one of our favorite venues to come to.”

Janet Spraggins, who recently moved to town from California to be closer to family, was spending the day at the festival with her two grandchildren while her daughter worked at a nail booth.

“I love the things the towns do here,” she said.

Spraggins said she also attended the festival last year and enjoyed it.