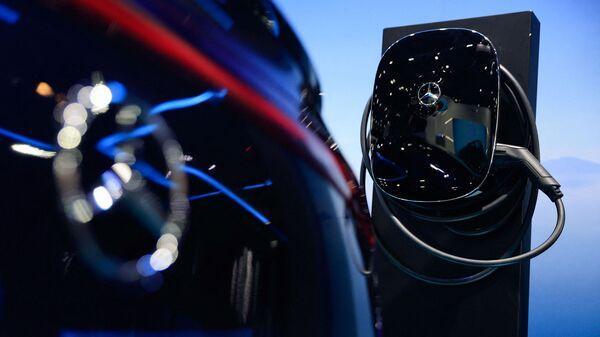 NASA is working on a new technology that is claimed to make electric vehicle charging significantly quicker than now.

The National Aeronautics and Space Administration (NASA) is claimed to have developed a new technology that makes the electric vehicle charging process significantly quicker than now. NASA claims this new and advanced technology can be handy for high-power DC charging stations. A NASA team working under Purdue University professor Issam Mudawar has developed a Flow Boiling and Condensation Experiment (FBCE) technology, which enabled dual-phase fluid flow and heat transfer experiments in the microgravity environment on the International Space Station (ISS). NASA also said in its statement that it delivered this heat control technology to the ISS in August 2021 and commenced providing microgravity flow boiling data in early 2022.

The space agency further explained that the FBCE’s flow boiling module includes heat-generating devices mounted along the wall of a flow channel into which coolant is supplied in a liquid state. When the devices heat up, the temperature of the liquid in the channel also increases, and eventually, the liquid adjacent to the walls starts to boil. This boiling liquid forms numerous small bubbles at the walls that depart from the walls at high frequency, continuously drawing liquid from the inner region of the channel toward the channel walls.

This process is claimed to transfer heat efficiently by taking advantage of the liquid’s lower temperature and the ensuing phase change from liquid to vapour. “This process is greatly ameliorated when the liquid supplied to the channel is in a subcooled state well below the boiling point. This new subcooled flow boiling technique results in greatly improved heat transfer effectiveness compared to other approaches,” claims NASA in a statement.

NASA claimed that Midawar’s team has applied the same principles learned from FBCE to the electric vehicle charging process. For EV charging, dielectric liquid coolant is pumped through the charging cable, capturing the heat generated by the electricity-carrying conductor. A sub-cooled flow boiling enabled the equipment to remove up to 24.22 kW of heat. NASA claims this charging system can provide electricity of up to 2,400 amps.

Interestingly, many technologies developed by NASA in the past have found their successful applications on earth, especially in the automotive industry. The latest of these could be the new temperature control technique. This may enable the EVs to charge more quickly by enabling greater heat transfer capabilities, thus ensuring higher charging power levels.