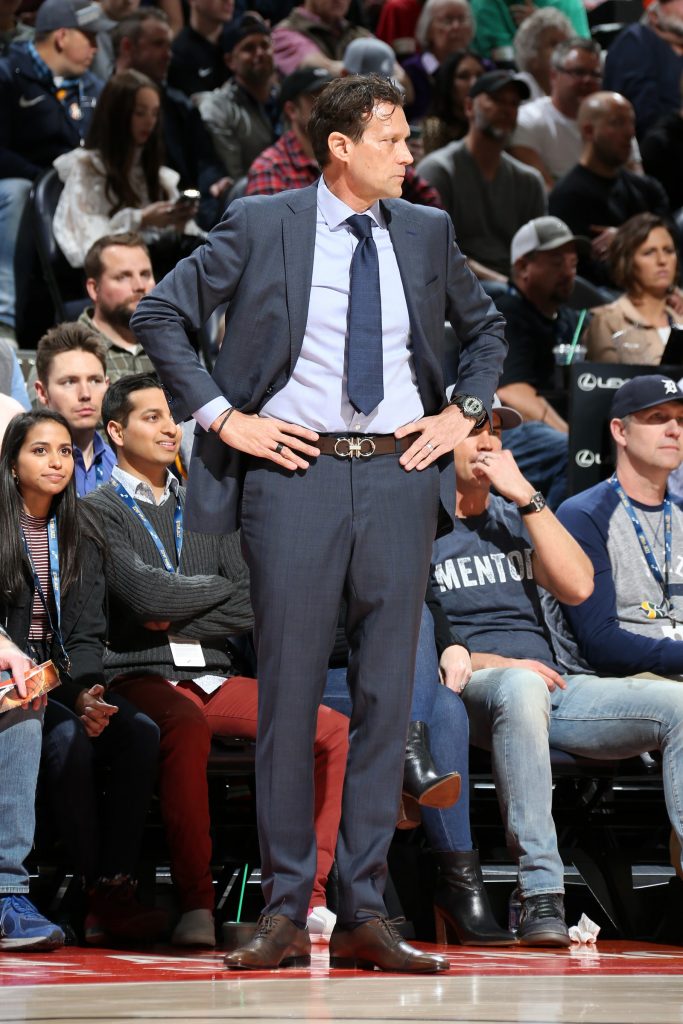 On Sunday, Quin Snyder announced he is stepping down as head coach of the Utah Jazz after eight seasons. The team team will surely be scrambling to fill the void left by Snyder, who treated Jazz fans to a steady diet of playoff runs. But Snyder’s departure also means saying farewell (for now, at least) to one of the NBA’s secretly best-dressed coaches, who quietly stalked the sidelines with a lineup of stacked beaded bracelets, flashy luxury watches, designer belts, excellent hair, and skinny jeans.

The NBA bubble the league orchestrated to finish out the pandemic-shortened season in 2020 permanently changed the trajectory of NBA coach style as we know it. Pre-bubble, coaches were required to wear suits while ambling the sidelines. But the bubble lowered the standard to polo shirts, and never went back. Anarchy has ensued on NBA sidelines since: it’s rare we see anything dressier than a quarter-zip on the sidelines these days. The most notable move in the NBA Finals comes from Boston coach Ime Udoka, who wears a face mask that always seems to be on his chin, under his nose, lifted off his face—he is a walking CDC poster of how not to wear a mask. The bar is low for coach style in today’s NBA, but Snyder clears it easily.

Sartorially, Snyder is one-of-one when it comes to NBA coaches. The man knew how to pull off a suit and his mane meant he always looked like he could be an extra on the set of a Martin Scorsese film. But while Snyder was clearly good buddies with his tailor, he’s really thrived in the more casual post-bubble environment. His wardrobe of late mostly consisted of black polos or slick long-sleeve tees. But it’s his undying devotion to his accessories drawer that keeps Snyder near the top of the list of best-dressed NBA coaches.

Because: Steph Curry has the three ball, Kyrie Irving has his handles, and Quin Snyder has a bottomless selection of black leather belts. Snyder wears designer belts from Ferragamo and Calvin Klein. He wears them with top stitching, and with big square buckles, and slender almost-D-shaped ones. The coach clearly knew his way around Salt Lake City’s ritzy City Creek Center mall.

In addition to his designer belts, Snyder was maybe the biggest watch collector among NBA coaches. Over the years he’s worn a Panerai, an all-green “Hulk” Rolex Submariner, several Hublot pieces, and a flashy Breitling. Most NBA coaches stick with an Apple Watch or a Fitbit. Doc Rivers has a Submariner, but no other coach can keep up with Snyder’s assortment. It seems in Snyder’s style universe, no body part is more important than the wrist. A nice watch is never enough for Snyder, who often stacked colorful beaded bracelets on each of his arms. A curious choice for an NBA coach? Possibly. But maybe Snyder, coming into an NBA that required coaches to wear suits, was simply looking for a way to express his own style and found salvation on his wrists.