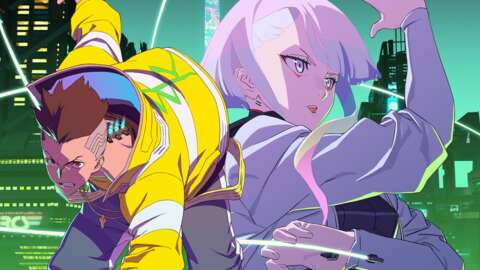 CD Projekt Red and Netflix first announced Cyberpunk: Edgerunners back in June 2020, before Cyberpunk 2077 came out. Two years later, we finally have a teaser trailer and clip for the upcoming 10-episode series, which hits Netflix this September.

Cyberpunk: Edgerunners comes from anime house Studio Trigger, the team responsible for anime like Kill La Kill, Promare, and Little Witch Academia. CD Projekt Red and Studio Trigger previously announced that Akira Yamaoka, best known as the composer of the Silent Hill games, will compose the score for the show.

The trailer is as frenetic and colorful as we’ve come to expect from Studio Trigger’s other projects. The show follows a street kid trying to survive in the futuristic city obsessed with body-modification. He decides to become an edgerunner, in order to stay alive. CD Projekt Red has said previously that the game’s setting of Night City will factor heavily into the show, but that the story will not be connected to the events of the game.

Masahiko Otsuka (Star Wars: Visions “The Elder”) and Yoshiki Usa (Gridman Universe) are the writers on the series, based on a story from CD Projekt Red. Akira Yamaoka (Silent Hill games) is the composer of the show.