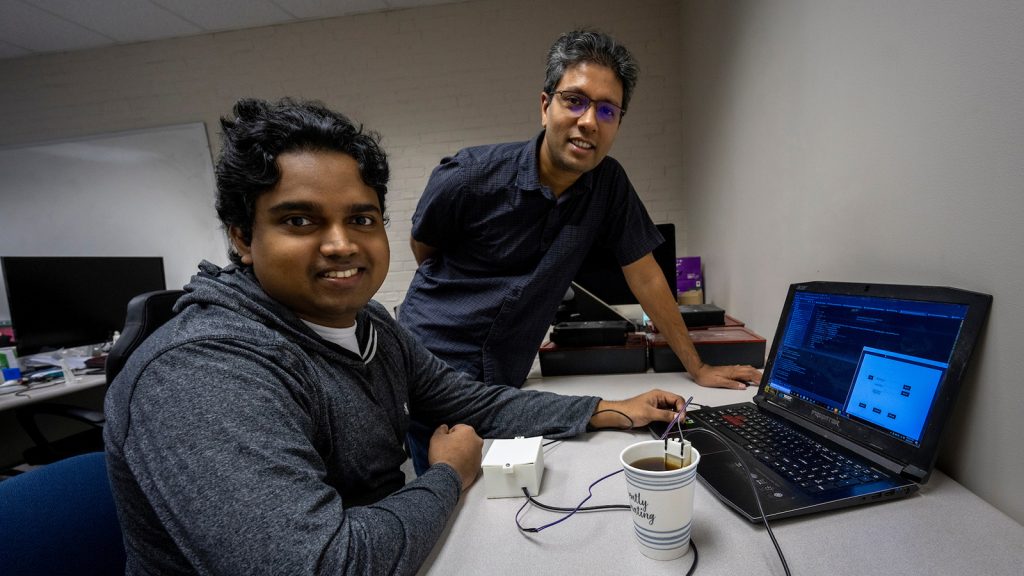 University of Maine researchers invented a device that could serve as a launchpad for new technology to ease daily tracking of food and beverage consumption for seniors and people with chronic health conditions.

SipBit, created by Nimesha Ranasinghe, an assistant professor of spatial computing, and Chamath Amarasinghe, a Ph.D. student of spatial information science and engineering, can pinpoint beverage type, volume and sugar content once submerged in liquid. The device, trained to recognize these traits through a series of deep learning algorithms, can identify them by using electrical impedance measurements over a range of frequencies of a drink.

Electrical impedance is the opposition offered to the electric current — moving charged particles like electrons— by an object. A given set of measurements of an electrical impedance correlates with a particular beverage trait, such as whether it’s tea, coffee or soda.

SipBit applies a known electric pulse across thousands of frequencies and then measures the impedances through the drink, a method called electrical impedance spectroscopy. After collecting multiple sets of measurements, SipBit analyzes them to identify the physical and chemical properties of a beverage, particularly what type of drink it is and its volume and sugar content.

Many seniors and people with strict diets, including those who have cancer, heart and kidney diseases, diabetes and other conditions, have to manually record daily what they eat and drink in detail to help preserve their health, which Ranasinghe says can be tedious, time consuming and open to miscalculation. He and Amarasighe hope to enhance the technology in SipBit to identify even more traits, such as sodium (i.e., salt), carbohydrates, protein, and spice content, and record it on devices like computers and smartphones to alleviate their burden. They then hope to develop cutlery and drinkware that are equipped with SipBit.

Watch the video about SipBit produced by the Multisensory Interactive Media Lab to learn more.

“We’re starting from this foundation,” Ranasinghe says. “Our next step is to explore different applications and create a smart cup or tumbler where people can automatically record their calorie intake in detail and real time.”

SipBit differs from other technology designed to identify various aspects of food and beverages by using electrical impedance spectroscopy instead of analyzing pictures of what people eat and drink before and after meals.

Amarasinghe and Ranasinghe say other devices have problems accurately distinguishing beverages of the same color and identifying their volume and other internal attributes. For example, they may struggle to determine whether a coffee was a dark or medium roast or how much is the sugar content of the drink.

“Through electrical impedance, we can recognize different beverage types and traits based on different signatures; for example, a cup of Pepsi versus a cup of Coca Cola,” Amarasinghe says.

Ranasinghe’s research primarily focuses on replicating culinary experiences by simulating tastes, smells and other senses through multisensory augmented reality and other technologies. His inventions have earned awards and national acclaim. Some of his popular devices include the Virtual Cocktail, or Vocktail, Digital Lollipop and Virtual Lemonade.

Ranasinghe says SipBit builds on his previous research because having sensory technology that can detect and collect data on different food or beverage traits will help invent new devices to simulate those experiences. He says he eventually hopes to develop a virtual space where people can share simulated foods and beverages around the world.

“We can provide new opportunities for human-food interactions,” Ranasinghe says. “One drive I have is figuring out how we can add these unexplored senses — smell and taste — into our technologies. SipBit is part of a bigger puzzle of future human-food digital interactions because if you want to incorporate new senses, you have to invent technology that can simulate them, sense them and collect data on them.”