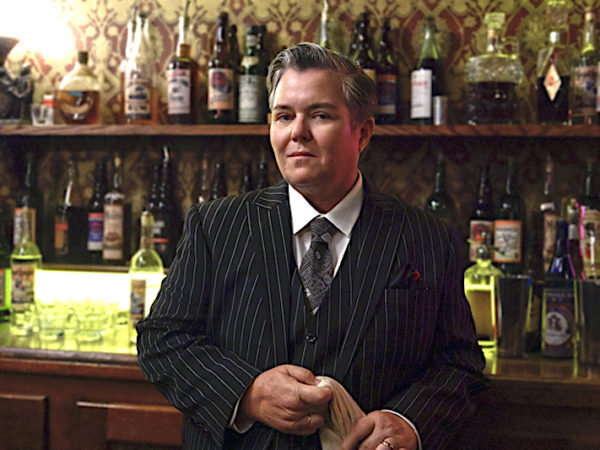 Rosie O’Donnell has a cameo in the new series A League of Their Own, launching today on Amazon Prime Video. A cast member of the 1992 film by Penny Marshall, O’Donnell returns in a significantly different role. Here she makes a cameo as Vi, a cross-dressing owner of a local bar and enthusiastic fan of the Rockford Peaches, the all-woman baseball team at the center of the storyline.

O’Donnell’s character is just one of the new elements of the series which includes lesbian and non-binary characters.

Chanté Adams plays Max, an African American woman, who while an outstanding athlete, initially isn’t allowed to play on the team because of her race.

Expect a whole new cast of characters and far fewer laughs than in the film. The series is a more realistic look at the struggles of women, of all races, sexual identities, and classes, to find a place for themselves in the tense era of World War II.

You might think of them as young actors but listen to an episode of their new podcast, Dare We Say, and you’ll more likely call them disruptors. Dare We Say launched this week.

Josie Totah and Alycia Pascual-Peña, both from Saved By the Bell, and Yasmine Hamady, from Pretty Boy, are good friends in real life. That makes it easier for the trio to get into serious discussions about sensitive issues such as the pitfalls of social media, the ins and outs of hookup culture, and LGBTQ rights.

The trio regularly turns to their elders (translation, any 26-year-olds), to try and understand the chaotic world around them.

Listen to a new episode every Thursday.

Disney continues its efforts to create a more colorful and diverse world on screen. Tatiana Maslany, the lead in the new Marvel Cinematic Universe series, She-Hulk: Attorney at Law,  wore a “Support Trans Futures” t-shirt in Disney+ promotional materials for the show.

“I’m very supportive of people who are fighting on the ground for LGBTQ rights. That community means a lot to me and if there’s any way that I can continue to voice my allyship then I’ll do it,” she says in one interview.

While an LGBTQ or trans character does not appear in the show, Maslany has likened her character’s struggle to adapt to her new body (a 6-foot-7-inch superpowered green hulk), to LGBTQ and trans people’s being uncomfortable in one’s own body or being an outsider.

Maslany’s character is an attorney who specializes in cases with superhumans. Surrounding her is Mark Ruffalo as Smart Hulk, Tim Roth as Emil Blonsky/the Abomination, and Benedict Wong as Wong,

She-Hulk: Attorney at Law premieres on Disney+ on August 18.

The Blu-ray version of The Trials of Oscar Wilde was released earlier this week by Kino Lober and it’s an absolute must-have for any fan of LGBTQ films.

The story might seem tame by today’s standards but when it was released in 1960, it was scandalous. It follows Wilde, a famed gay playwright involved with a young nobleman at the time, who was prosecuted for gross indecency and sodomy.

Writer/director Ken Hughes had considerable difficulty getting anyone to play the lead role. Actor Peter Finch eventually took on the role – but not without some concerns. “I’m scared stiff,” Finch reportedly said at the time. The role of Wilde’s young lover, Lord Alfred Douglas, commonly called Bosie, was played by John Fraser.

Part love story and part courtroom drama, The Trials of Oscar Wilde is a riveting, controversial look at the most notorious legal battle of the late 19th century.