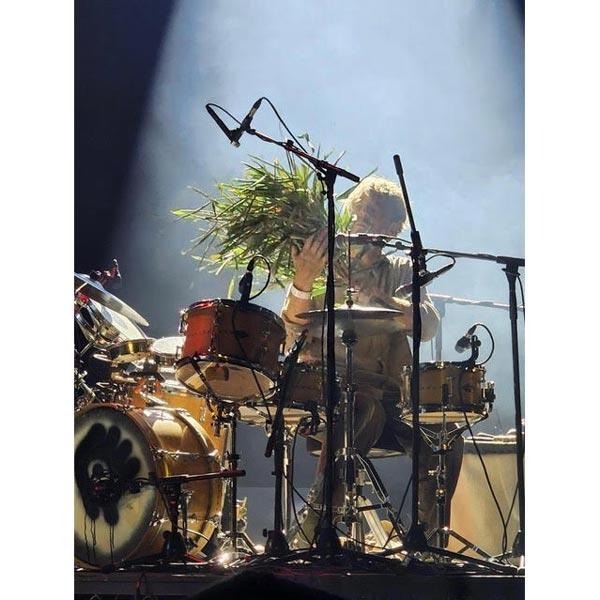 (ENGLEWOOD, NJ) — On Saturday, November 5, 2022 at 7:30pm, Medeski Martin & Wood’s Billy Martin — a long-time Bergen County resident — will perform another solo set utilizing percussion instruments, found objects, voice, flutes, bird calls, and more at The Black Box Performing Arts Center, 49 East Palisade Ave between Grand Ave and Dean Street. Designed for people of all ages and backgrounds, this mind-blowing, unique, and soulful performance will take you to places beyond the imagination — and it continues an ongoing residency for Mr. Martin at The Black Box.

Billy Martin was born in NYC in 1963 to a Radio City Rockette and a concert violinist. At age 17, he devoted himself to music and dove into Manhattan’s thriving, eclectic musical landscape. In the years to follow, he honed his craft everywhere from Broadway orchestra pits to Brazilian nightclubs and burgeoning underground performance spaces. From the roots of the downtown scene he emerged with Medeski Martin and Wood, bridging the harmonic complexity of jazz, the conversational fluency of free improvisation, and the groove and swagger of classic R&B and funk.

A series of albums and high-profile collaborations with John Scofield, John Zorn, Iggy Pop, Natalie Merchant, and others brought the band international acclaim.  Martin has relentlessly pursued diverse musical contexts, from free improvisation to chamber compositions to film scores. Much of his work is available via his Amulet Records label, which recently released ‘The Road to Jajouka’ —a series of Martin-produced collaborations between the Master Musicians of Jajouka and renown artists such as Ornette Coleman, Flea, Marc Ribot, John Zorn, Lee Ranaldo, Bill Laswell, Mickey Hart, MMW, and more.

Martin is also an accomplished filmmaker and visual artist, whose work has been exhibited in solo and group installations around the world, including 2014’s Cartegena de indias Bienal in Colombia and the Drawing Sound series at The Drawing Center in NYC (2015).  What began for Martin as tireless enthusiasm for music, percussion, and improvisation evolved into a wide ranging search for the roots of inspiration. Among the most valuable undertakings in this ongoing exploration is teaching.

“When I teach,”  Martin explains, “I learn and discover methods to build my vocabulary and style, and I love to help others do the same.”  His experiences as a teacher, student, and musician led him to create and direct Life on Drums, a cinematic exploration of percussion and the creative process with his childhood drum instructor, Allen Herman. Billy is currently Executive Artistic Director and CEO of the legendary Creative Music Studio. He also owns and manages his own record label, Amulet Records.

Limited tickets, $25 ($15 for students), are on sale now at www.blackboxpac.com.

Downtown Englewood’s Black Box Performing Arts Center has emerged from the pandemic to become New Jersey’s premiere incubator for new and under-produced works for the stage by world-class writers.  In Fall ’21, our uniquely collaborative group of theater professionals developed Eric Bogosian’s 1+1, which has since received a Special NYC Premiere and is scheduled to appear Off-Broadway in early ’23.  BB’s ’21-’22 season also included the NJ premiere of Ode to Joy by Broadway’s Craig Lucas, the regional premiere of The Cleopatra Club by legendary filmmaker Paul Schrader, and the recent world premiere production of Exposed by Beth Henley.

For 202-23, select plays and musicals in collaboration with artists such as filmmaker/playwright Neil LaBute, prolific Hollywood sitcom writer Ken Levine, Nicky Silver, and Craig Lucas & Craig Carnelia – as well as some unique partnerships with the Estates of Edward Albee, Sam Shepard, and I.B. Singer — are all in progress.

BBPAC is the team behind Shakespeare in the Park Bergen County, having presented shows free to the public for the past five Summers. In addition, a select group of acclaimed artists in music, comedy, and film – starting off with Billy Martin’s solo performances! – will be ‘in residence’, developing a slate of new projects, performances, and workshops.  Finally, our unique space houses Black Box Studios, the area’s most innovative collaborative performing arts school, established in 2007.  The Black Box PAC is a 501c3 nonprofit organization based in Englewood, New Jersey.