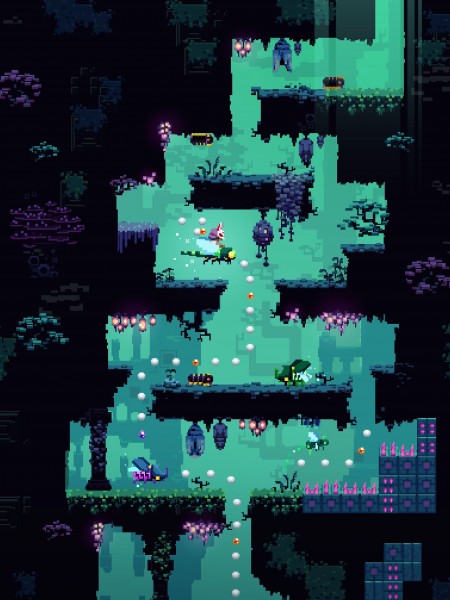 Developer Snowman has captivated players with handcrafted indie gems, such as The Alto Series, Where Cards Fall, and Skate City. Today, on Netflix’s Geeked Week stream, it revealed a new game called Lucky Luna for iOS and Android, which will appear later this summer on Netflix’s streaming service. The game is free for all Netflix subscribers.

Lucky Luna features entirely pixel art and is a vertically scrolling, platformer dungeon crawler. The big catch? You have no jump button to get around. Players swipe left and right to guide Luna through trap-filled dungeons with hidden secrets and alternate paths.

Every level presents a different environment and new mechanics that allow players to explore in a new way. In the story mode, your main goal is to collect as many pearls as possible to advance to the next stage.  You’ll also find new clues and light story elements to learn more about Luna’s past and discover her purpose.

Lucky Luna will also support an endless mode with procedurally generated runs for every environment. This is where you can make a name for yourself on the leaderboards. Your score is based on your speed, collected peals, and the number of floors you’ve descended. Gather enough treasure from your runs and you unlock additional endless dungeons to keep the run going.