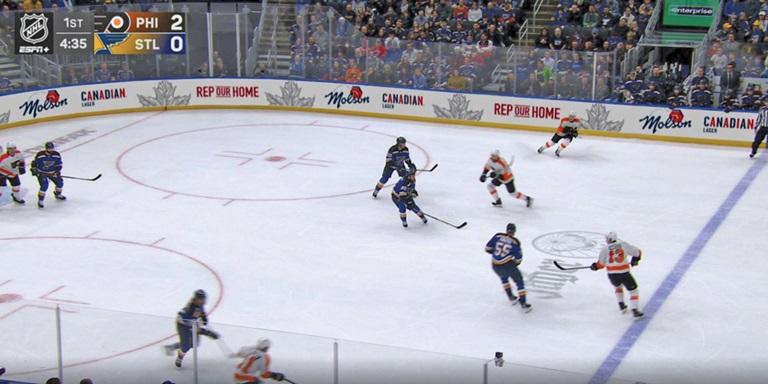 DEDs, which have been tested in prior years, allow for targeted advertising and new revenue.Courtesy of the NHL

Welcome to the world of digitally enhanced dasherboards, or DEDs, a technological innovation that allows digital graphics to be inserted over the camera-visible boards during live game broadcasts. Ads will change every 30 seconds throughout the game, and sponsors will also be able to introduce animation into their in-game branding for fans watching at home.

The NHL believes DEDs, which Commissioner Gary Bettman said cost tens of millions of dollars to develop, mark the biggest development in in-game advertising since the Minnesota North Stars sold the first pair of dasherboard ads for $3,000 in the 1980-81 season.

“This has so many applications and, in my opinion, will revolutionize signage moving forward across the world across all of sports,” said Keith Wachtel, the league’s chief business officer and executive vice president of global partnerships.

The NHL has been working in conjunction with U.K.-based technology company Supponor on the DED technology since the 2016 World Cup of Hockey, when the league inserted different dasherboard advertising for separate feeds in each of the participating countries. Since then, Supponor and the league have continued to develop the software-based solution to allow for the seamless insertion of digital ads on the boards without interfering with the action on the ice.

“We’ve mastered it in such a way that you will not be able to tell that it’s not being done in the arena,” Wachtel said.

The innovation is particularly meaningful in a sport like hockey that has a significant presence in both the U.S. and Canada. Previously, if a tentpole event or playoff game were being held in the U.S., the league only had static dasherboard space for its North American and U.S. partners, while its Canadian partners were left out. With DED technology, the league can overlay Canadian sponsors’ branding on the boards for the Canadian feed, ensuring brands like Canadian Tire, Scotiabank, SkipTheDishes and Tim Hortons receive exposure during the league’s biggest events. The same is true of Canadian teams’ road games in the U.S. that are televised nationally in Canada. The league can also now sell more valuable international sponsorships because it can show fans in Europe and elsewhere domestic brands on the virtual boards.

The technology has also changed the way clubs allocate dasherboard space to their sponsors. Instead of just selling static dasherboard space in their home arenas, teams can now also offer sponsors digital dasherboard exposure for local telecasts of both their home and away games. Fans watching on TV or via streaming platforms will see relevant brands on the boards regardless of where a particular game is being played. There’s also a mechanism in place where teams can share time on the digital boards with sponsors of the opposing team seeking exposure in their market.

In addition to the digital signage being more geographically relevant, the league believes it will be much more impactful. For the digital overlays, the boards are divided into five zones, each of which can feature as many as two different advertiser logos. The league and teams, however, can offer brands multiple zones at a time for greater exposure, or even a total takeover. Brands will be able to have up to three seconds of animation for full takeovers.

“There’s an opportunity to be very creative and different on a period-to-period or game-to-game basis with creative which allows a lot more flexibility,” said Playfly Sports Chief Operating Officer Craig Sloan, whose company works with brands that advertise on RSN telecasts of NHL games.

The digital dasherboard overlays will be visible on screen whenever shots from the main broadcast camera are displayed on the telecast, which Wachtel said is typically 80%-85% of a game. Shots from other cameras, such as close-ups or alternate angles, will still show the static in-arena dasherboards.

Different clubs are taking different approaches to the new technology. The Florida Panthers and Washington Capitals, for example, are exclusively offering partners “full takeovers,” meaning they’ll have the digital boards to themselves for 30 seconds at a time on local telecasts.

“When we looked into creative from multiple partners or even three partners, we just didn’t feel like it was exclusive enough for a partner to really own the moment and really have a very integrated call-to-action messaging and provide probably the maximum flexibility,” said Jim Van Stone, Monumental Sports & Entertainment president of business operations and chief commercial officer, who oversees partnerships for the Capitals.

The Anaheim Ducks, on the other hand, plan to primarily show three sponsors on the digital boards at a time — one in each offensive zone and one in the neutral zone — while offering a limited number of full takeovers to its arena naming-rights partner, Honda.

Panthers Chief Revenue Officer Shawn Thornton projects that the team is on pace to increase dasherboard sponsorship revenue by about 50% thanks to the introduction of the DED technology.

“Our partners have been very excited about the capabilities: being able to show messaging, QR codes, moving away from just a logo and actually being able to communicate what initiatives or products that they have,” Thornton said.While the NHL expects digital dasherboard creative to resonate with viewers, the league has also been mindful about not taking too much attention away from the game on the ice.

“The NHL wants to be very respectful in terms of the look and feel you get from the digitally enhanced dasherboards,” Supponor CEO James Gambrell said. “They’ve done a lot of work on making sure that that still looks the same with the white background, and they want to be cautious on how much animation they allow so it’s respectful to the history of the culture of the game.”