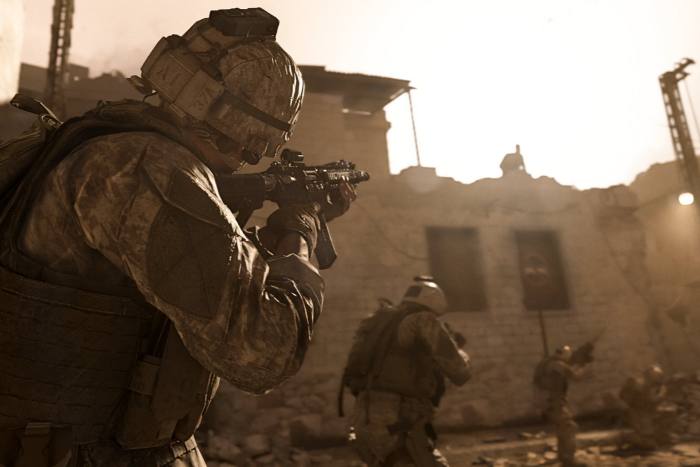 It looks just like a normal Xbox 360 controller, one I might have held through long gaming sessions during my teenage years. Yet the gadget in the glass case at London’s Imperial War Museum had another purpose entirely — it controlled the camera of Desert Hawk, an unmanned aerial vehicle used for military surveillance in the Afghanistan and Iraq wars. The manufacturer, Lockheed Martin, realised that Xbox controllers were cheaper than military-grade alternatives and did the job just as well. Many new recruits had already used gaming controllers to engage in fantasies of war; now they could use them for the real thing.

This uncomfortable elision of war and entertainment is explored in IWM London’s new exhibition, War Games. While the drama of war has long proven irresistible to storytellers, technological innovations regularly provide fresh angles. In the case of games, war stories can be experienced as if you are the protagonist of the story, rather than a mere spectator. In a survey of 40 years of gaming history, the exhibition asks: what can games teach us about conflict?

“There’s always a tension when playing at war because war is primarily about violence and destruction, while the defining characteristic of games is fun,” says co-curator Ian Kikuchi. Fans of the first-person shooter genre know that the easiest way to resolve this tension is simply to make the violence feel fun. We see the team behind stealth shooter Sniper Elite 5 discussing how they fine-tune each rifle to make it satisfying to fire and how much care goes into programming each gruesome headshot. There is nothing inherently wrong with enjoying this — entertainment media have long given audiences a safe space to explore their darker impulses and ideas. Gore can be a thrilling spectacle as long as we know it’s not real.

Yet war games are constantly edging towards greater realism. The exhibition includes the rifle on which the Sniper Elite 5 team modelled their digital version. And in a video, the creators of Call of Duty: Modern Warfare slavishly pursue graphical fidelity, a goal that remains a core concern for large swaths of the gaming community. It is curious to note that players of modern shooters demand the utmost realism in terms of weapon design and blood spatter physics but simultaneously desire a depiction of war that is anything but realistic, a fantasy retelling that strips out all of the boredom, the trauma — in other words, the humanity.

Though the main theme of most shooters is uncomplicated heroism, several indie games have tried to explore the emotional realities of war and to generate greater empathy. The exhibition presents Through the Darkest of Times, in which you direct opposition to the Nazi party in 1930s Berlin, and This War of Mine, where you control civilians struggling to survive in a city under siege. Most moving is Bury Me, My Love, an innovative game casting players as a man communicating via text message with his wife as she tries to escape Syria. The messages you send dictate whether she makes it to Europe safely, ends up in a refugee camp or drowns at sea.

Alongside the games are placed objects from the museum’s collections that resonate with these humanist retellings of war stories: a blanket carried across Europe by a second world war refugee and the charred musical instrument of an Iraqi man who fled his home in Mosul to escape Isis.

An intriguing observation here is about the trends according to which different wars are depicted in popular culture. “The second world war has always felt like a setting where it was OK to have adventures,” says Kikuchi, invoking films such as The Great Escape as well as the Call of Duty games. “Meanwhile the first world war is remembered primarily as a tragedy that traumatised an entire generation.” This tracks with the artistic first world war game 11-11: Memories Retold, whose engagement with history is soulful and aching rather than jingoistic. Meanwhile, modern wars in the Middle East all too often rely on clumsy stereotypes of Arab people.

We also see a demo of the controversial Six Days in Fallujah, which has attracted criticism from gamers who are concerned about whether it can sensitively portray the plight of Iraqi civilians while extolling the heroism of US marines. This raises questions about whether games can provide a sufficiently sensitive canvas to portray recent conflict — there are no games about the war in Ukraine just yet, although the industry has united in support of Ukrainian developers.

“More than anything, games tell us about the stories we want to tell about conflict,” says Kikuchi. “They over-emphasise the difference that individuals can make. Conflicts are rarely solved by one surgical strike or a special forces squad.” To walk through the main galleries of IWM London is to understand that war is beyond the control of any one individual. It’s a colossal phenomenon that tears through history like a force of nature, something to be endured, not enjoyed.

Games might mine the topic for enjoyable spectacle or explore its darker undercurrents, but they mostly peddle a fantasy. “They reveal our desire to be in control of our destiny,” says Kikuchi, “in a way which real war always denies us.”