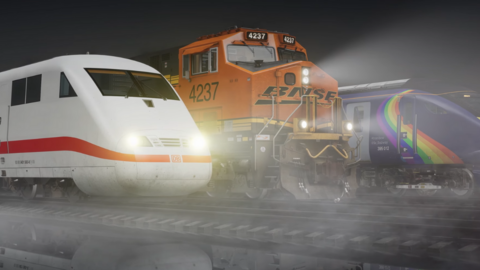 All aboard, Xbox Game Pass subscribers–Train Sim World 3 is coming day one to the digital game library. The popular train simulation title launches on September 6, and will be available to play free-of-charge on Xbox One, Xbox Series X|S, and and PC via Game Pass.

The follow-up to 2020’s Train Sim World 2, Train Sim World 3 promises “deeper immersion than ever before.” According to Xbox’s blog post announcing the release, the game will feature “volumetric skies that transform the atmosphere to each of the routes,” new trains, and new courses. Among these tracks are Kassel-Wurzburg (the longest route ever made for Train Sim World), Cajon Pass, Spirit of Steam, and an expanded version of Southeastern High Speed. The series is also introducing a new training center to help onboard players new to the train simulation genre.

“We feel very strong about sharing our trains passion with everyone,” Xbox wrote in the announcement. “Having this new ‘onboarding’ process will really help new players get more enjoyment out of the different styles of locos available.”

Train Sim World 3 is also placing a greater emphasis on allowing players to craft a more personal locomotive journey. Players can now design and create their personal journey with the Scenario Planner and Livery Designer. After creating your own trains, you can then test them out on any route with the game’s Off the Rails mode. Last but not least, players will also be able to share their creations via the Creators Club, which has officially left beta.