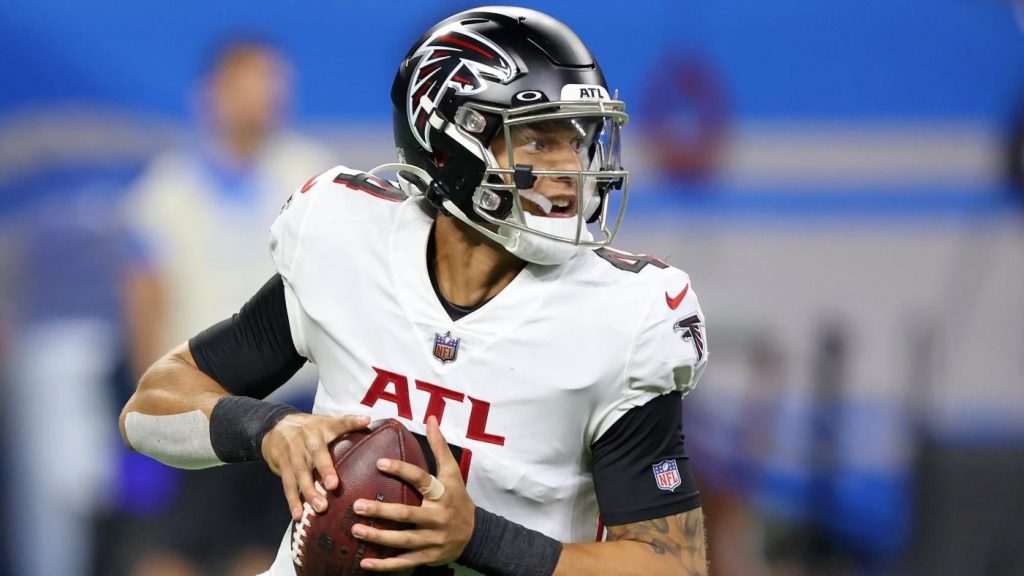 The NFL preseason is officially underway, and Week 1 of the 2022 exhibition season has been quite eventful up to this point. Atlanta Falcons rookie quarterback Desmond Ridder threw a game-winning touchdown against the Detroit Lions with under two minutes left, Jordan Love and Trey Lance traded long touchdowns in the Bay and Cincinnati Bengals star kicker Evan McPherson went 3 of 3 on his field goals, including two from at least 56 yards out.

There were also a couple of injuries, the most notable being New York Jets quarterback Zach Wilson — who tore his meniscus. However, he’s expected to be OK, and may not miss any time in the regular season.

This Saturday, we have a total of eight games to watch, starting with the Carolina Panthers vs. Washington Commanders and Kansas City Chiefs vs. Chicago Bears at 1 p.m. ET, and ending with a battle for L.A. between the Super Bowl champion Rams and Chargers.

Below, we will track all the must-see highlights from Saturday’s action. Get ready for a full day of football.

Montana State rookie wideout Lance McCutcheon announced himself to Los Angeles on Saturday night when he snatched the ball out of the air over one Chargers defender and then shed two tacklers on his way for a 60-yard score for the Rams. That’ll go down as one of the more impressive touchdowns of the preseason.

Pickett walks it off!

Two days, two rookie quarterbacks with game-winning touchdown passes. On Friday, it was Desmond Ridder getting it done against the Lions with fewer than two minutes to play. Pickett then one-upped Ridder on Saturday, connecting with Tyler Vaughns, who stepped out of a tackle and then dove for the front-left pylon with just three seconds to play.

It was a memorable debut for the first-round pick, who went 13-for-15 passing for 95 yards and a pair of scores. Mitchell Trubisky still has the inside track to be the Steelers’ Week 1 starter, but Pittsburgh has to be happy with its top draft pick in his NFL debut.

Geno Smith accounted for one touchdown in the first half, while Lock has thrown for two touchdowns in a little over a quarter. He’s completed eight of his first 11 throws for 102 yards and passing scores to Dareke Young and DeeJay Dallas.

Pittsburgh was eager to welcome its first-round quarterback Kenny Pickett on Saturday, meeting him with thunderous applause as he took the field to begin the second half on offense for the Steelers. Pickett rewarded those in attendance with an impressive 75-yard touchdown drive where he completed all five of his passes for 33 yards and a touchdown to Jaylen Warren. He also completed a pass to Connor Heyward for the two-point conversion.

While this may have been in the second half of a preseason game, you can’t ask for much more from Pickett, who looked pretty sharpe out of the gate.

Why use your hands to force a turnover when you can use your legs? That’s exactly what Elijah Campbell did in the second quarter against the Buccaneers. The Dolphins scored a touchdown on the next play.

With Tua Tagovailoa among the starters sitting out, seventh-round rookie Skylar Thompson began the game under center and has taken full advantage of his opportunity. He started the game by completing 10 of his first 12 passes, with the highlight being a 22-yard strike to Lynn Bowden Jr. The Dolphins have reportedly had trade talks about Bowden and Preston Williams, but the former showed Miami what he could do on that play.

Geno Smith is currently ahead of Drew Lock in the battle for the Seahawks’ starting quarterback job, and the veteran has been solid through one half against the Steelers in the preseason opener. He finished the first two quarters 10-for-15 passing for 101 yards and added a two-yard touchdown run to pull Seattle within a score before the break.

The George Pickens hype train is about to go supersonic. After turning heads over the course of training camp, the Steelers’ second-round pick is now showing the entire NFL what he brings to the table.

In Pittsburgh’s preseason opener against Seattle, the rookie wideout hauled in an eye-popping touchdown catch from Mason Rudolph. On a third-and-13 attempt from the Seattle 26-yard line, Rudolph uncorked a pass towards the back-right pylon in the end zone. Pickens was not only able to get a step on his defender, but was also able to keep both feet in bounds after making the catch.

Ho-hum, just another budding star receiver coming out of Pittsburgh.

They don’t call him “Punt God” for nothing. In the closing minute of the first half of the Bills and Colts’ preseason opener, rookie punter Matt Araiza booted a thunderous 82-yard punt. It bounced deep into Indy territory before going into the end zone for a touchback. Araiza’s punt had an unofficial hang time of 4.23 seconds, according to The Athletic.

The San Diego State product made a name for himself in college for punts similar to this, and that’s what led to him being a sixth-round pick for Buffalo in the 2022 NFL Draft. If he can continue to have punts like this and force teams to travel the length of the field against a defense that ranked No. 1 in DVOA the NFL last year, Buffalo is going to be even more dangerous than initially thought.

The Buffalo Bills and Indianapolis Colts are the current betting favorites to come out of their respective divisions and are among the more popular wagers to win the AFC in 2022. That said, they didn’t exactly look like juggernauts in the first half of their preseason opener. This exhibition quickly turned into a turnover-fest. Over the first two quarters, there has been a total of six turnovers, which includes a back-and-fourth of four-straight in the second quarter.

After stopping a fourh-and-4 attempt by the Colts, quarterback Case Keenum was stripped near midfield. Just six plays later, Indy signal-caller Nick Foles was stripped with Buffalo’s Terrel Bernard recovering the loose ball and returning it 69 yards for the touchdown.

On the very next drive following that score, Foles’ throw was intercepted. A play later, the turnover train continued to chug as Keenum was picked in the red zone.

Carson Wentz and Taylor Heinicke didn’t do much at quarterback for the Commanders, but their third QB in rookie Sam Howell impressed. It took him just five passing completions to become Washington’s leading passer vs. his hometown Panthers, and then he recorded this impressive 17-yard rushing touchdown.

Don’t be caught off guard by Howell’s legs. He ran in 11 scores for the Tar Heels last year.

After Carolina went three-and-out on the next possession, Howell again took the field — looking to at least tie the game halfway through the fourth quarter. The rook led a 13-play, 67-yard drive which was capped with his second rushing touchdown of the game. Howell then hit Alex Erickson for the two-point conversion to take the lead, and the fans at FedEx Field went nuts.

Justin Fields’ new mentor is leading a comeback in Chicago. Once down 14-0, the Bears have scored 16 unanswered thanks to backup quarterback Trevor Siemian. Chicago isn’t acting like this is a preseason game, as the offense went for it on fourth-and-2, and Siemian found a streaking Dante Pettis down the field.

Three plays later, Siemian hit Dazz Newsome on a nice throw in the corner of the end zone to pull within one point of the Chiefs.

Harrison Butker isn’t the only good kicker on the Chiefs’ roster, as one of their safeties has a talented leg as well. Reid kicked a 65-yard field goal in training camp last week, and got a shot to kick an extra point in Week 1 of the preseason. It was perfect.

It looks like the rookie out of Alabama is poised to take some touches away from Antonio Gibson in 2022. Robinson rushed for 26 yards on his first six carries, and caught two passes for 15 yards early as well. Robinson also recorded some Commander history, as he scored the first touchdown of the new era in Washington.

Tajae Sharpe a ‘catch of the preseason’ candidate

Sharpe is battling for playing time among the Bears’ wide receivers, and this catch certainly will help his case. He used athleticism, concentration and sideline awareness to reel this one in. A new member of the Bears, Sharpe spent last year with the Falcons. He caught 25 passes for 230 yards in 15 games played.

The Panthers are all over the Commanders early, and Antonio Gibson helped his opponent’s cause by fumbling at his own 28-yard line. Darnold replaced Baker Mayfield at quarterback for Carolina’s second series, and three plays into the drive, he connected with Rashard Higgins for an eight-yard touchdown.

This is a pretty impressive throw, as Darnold had Montez Sweat in his face, yet perfectly led his wideout while throwing off his back foot.

The NFL world is a bit nervous for the second-year Fields, as he’s been charged with finding success behind a questionable offensive line and with a wide receiving corps not many are high on. Fields still has Mooney, however, who is coming off of a career campaign in which he caught 81 passes for 1,055 yards and four touchdowns.

Check out this throw and catch that went for 26 yards:

Alright, that’s enough. We can take Patrick Mahomes out of the game. He’s still good at football. The former NFL MVP led an 11-play, 72-yard drive that included a couple highlight-reel plays, and was capped with a five-yard touchdown pass to Blake Bell.

Watson is awaiting a potential increase in punishment from the NFL — who is expected to up his six-game suspension to something more significant — but he took the field for the Browns’ first preseason game of the new year against the Jaguars. Watson certainly looked like someone who was playing his first game in 568 days, as he finished with just seven passing yards on 1 of 5 passing.

In positive news for the Browns, backup QB Joshua Dobbs looked good, completing 10 of 13 passes for 108 yards and a touchdown.

The Lions-Falcons preseason game had no business being this entertaining. The new QB in the ATL, Marcus Mariota, looked great, and so did the rookie Desmond Ridder. On fourth-and-9 down three points with under two minutes remaining, Ridder found Jared Bernhardt for the game-winning score.

Not only was this play good to see from a rookie quarterback, but the player on the receiving end of the touchdown deserves some credit as well. Bernhardt is a former Maryland lacrosse star and the 2021 Tewaaraton Award winner — which is given to the best player in college lacrosse. Not only was Bernhardt a lax legend at an elite school, but he then transferred to Ferris State to play football, and led the program to an undefeated record and their first Division II national championship as a quarterback. Now, he’s caught a game-winning touchdown in the NFL. What a story.