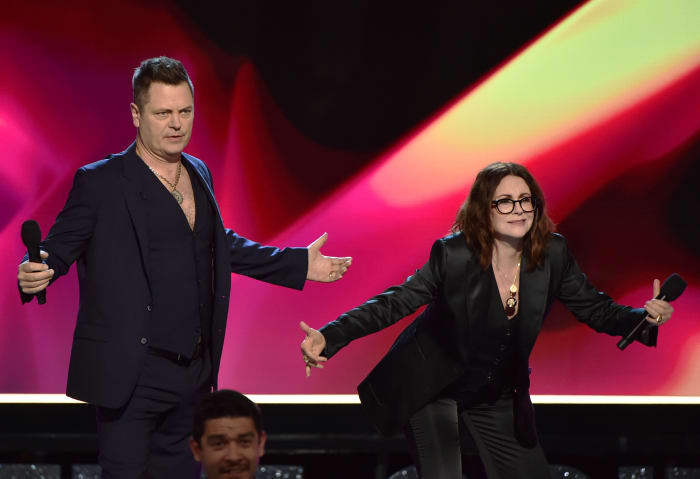 Nick Offerman and Megan Mullally’s relationship is a comedy match made in heaven. The pair have both enjoyed successful runs on classic NBC sitcoms and played iconic characters. As a result, this couple seems to fit each other perfectly both personally and professionally.

The comedy duo has amazing chemistry both offscreen and on, having played opposite each other on numerous occasions. In fact, they have even co-authored a book together, 2018’s The Greatest Love Story Ever Told: An Oral History. Does love get any better than this?

Here is everything you’ve been dying to know about Nick Offerman and Megan Mullally’s relationship.

Related: Nick Offerman Tells Us About Pam and Tommy, His Substack Newsletter and If He’s Working With Wife Megan Mullally

Are Nick Offerman and Megan Mullally still together?

As of this writing, Nick Offerman and Megan Mullally are very much still married and still happy. The pair even co-hosted the 37th Film Independent Spirit Awards in 2022, making them one of the first husband and wife teams to ever host an awards show together.

How did Nick Offerman meet his wife Megan Mullally?

Nick Offerman and Megan Mullally met in 2000 when they were acting in a play together, specifically an Evidence Room Theatre Company production of The Berlin Circle. However, it was not love at first sight—at least not on Mullally’s part, with the Will & Grace star admitting Offerman’s look was “not cute… There was a lot of back hair.” Considering the fact that he was apparently wearing gold overalls that doubled as a notepad because “he couldn’t afford paper,” we can assume her assessment to be accurate.

Even so, it didn’t take long for the costars to hit it off. On a 2018 episode of Conan O’Brien’s podcast Conan O’Brien Needs a Friend, Offerman described the pair getting physical early on in their relationship in a Los Angeles canyon park in front of some coyotes. “It was early on and I feel like so many of the pleasures in our marriage have been cruise-directed by Megan, and this was no exception. After our play one night, we went to a fancy grocery store, which was a new thing for me, and got a baguette and cheeses and a bottle of nice wine, and she knew the park. She may have been there before me…”

The couple married a mere 18 months after meeting.

How old was Megan Mullally when she met her husband Nick Offerman?

Megan Mullally was 41 when she met Nick Offerman in 2000 while the two were starring in a play together. For his part, Offerman was 29—a fact Mullally wasn’t initially aware of.

Mullally made the assumption about Offerman’s age partially due to his appearance for the play they were working on, which had him sporting a mustache and a bald head.

When Mullally discovered the 11-year age difference between them, “I was pissed,” the Emmy winner exclaimed. “I thought he looked old! And he was mature, so when I found out he was 29, I said these two words: ‘You motherf**ker.’ And I almost ran my car off the road.”

Despite the age difference, the two hit it off and were married 18 months after meeting.

Related: 49 Famous Celebrity Couples Who Will Help You Feel the Love

When did Nick Offerman get married?

Megan Mullally and Nick Offerman threw a surprise wedding in September 2003, 18 months after they first met. As it took place the day before that year’s Emmys, the 20 guests that were in attendance believed they were just attending a pre-Emmys party. In fact, Mullally repurposed her wedding outfit—a white bustier and white trousers—for the Emmy Awards the day after.

Did Nick Offerman and Megan Mullally meet on Will & Grace?

Nick Offerman and Megan Mullally did not meet for the first time on the set of Mullally’s hit NBC sitcom Will & Grace, though Offerman has made multiple appearances on the series. Offerman and Mullally actually met in 2000 when they were both starring in an Evidence Room Theatre Company production of The Berlin Circle.

Related: 30 of the Best Movies About Addiction and Alcoholism

Was Nick Offerman ever on Will & Grace?

Mullally for her part has appeared as a recurring character on Offerman’s hit NBC sitcom Parks and Recreation as the ex-wife of her real-life husband’s character. The running joke of the tumultuous nature of their characters’ relationship is one of the best plotlines of the series, with multiple “Ron and Tammy” episodes occurring throughout the show’s run.

Why didn’t Nick Offerman have kids?

Megan Mullally and Nick Offerman actually did try to have kids early on in their marriage. Mullally explained, “I never had a burning desire to have children. But then I met Nick, and I thought, ‘This is the only person I’d do this with.’ So, we tried, but I was a little long in the tooth for that sort of thing. We tried for about a year or so, and it didn’t happen, and took that to mean it wasn’t meant to be.”

Offerman has admitted that the child-free path has “probably” helped their relationship.

Next, learn all about Nick Offerman’s series The Last of Us.