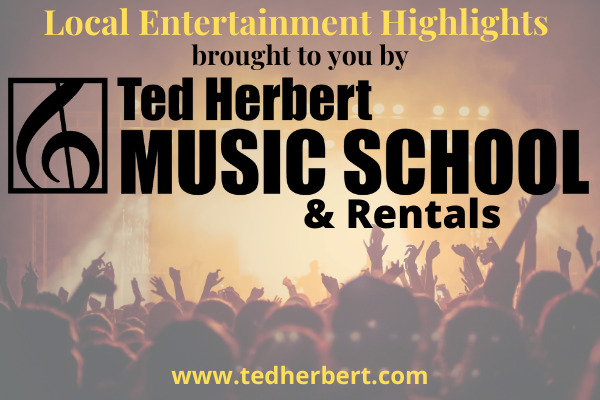 This week’s round-up of live entertainment in and around Manchester is brought to you by A. Robert Dionne of Ted Herbert Music School & Rentals. Email your entertainment events to rob@majestictheatre.net for consideration. Be sure to add your events to the InkLink community calendar for possible inclusion in the live radio report on WMNH 95.3 (The Morning Show with Peter White – “World of Entertainment” LIVE every Thursday at 8 a.m.)

Always be sure to check a venue’s website or social media for last minute changes.

Grittier and more electrifying than ever before, the world’s best-loved musical returns to the Palace.  After a whirlwind summer romance, leather-clad greaser Danny and girl next door Sandy are unexpectedly reunited when she transfers to Rydell High for senior year.  But can they survive the trials and tribulations of teenage life and find true love once more?  With a hip-shaking rock n’ roll score featuring hits Summer Nights, Greased Lightning, and We Go Together, Grease celebrates Rydell High’s class of 1959 in all their duck-tailed, bobby-socked, gum-snapping glory. www.palacetheatre.org or (603)668-5588

ON YOUR FEET! is the inspiring true story about heart, heritage and two people who believed in their talent—and each other—to become an international sensation: Gloria and Emilio Estefan. Now their story is an all-new exhilarating original musical winning the hearts of critics and audiences alike, with the Chicago Tribune declaring “IT’S A HIT!” and The New York Times cheering, “The very air in the room seems to vibrate in this undeniably crowd-pleasing musical!” ON YOUR FEET! features some of the most iconic songs of the past quarter-century, including “Rhythm is Gonna Get You,” “Conga,” “Get On Your Feet,” “Don’t Want To Lose You Now,” “1-2-3” and “Coming Out of the Dark.” Prepare to be on your feet from start to finish! www.ccanh.com or (603)225-1111

A comedy by Katherine DiSavino & Kevin Mead / Do you have Seasonal Allergies? You might be experiencing the symptoms of them and not even know it. Seasonal Allergies tend to show themselves right around the holidays: do you feel a tickle in the back of your throat when you realize your vegetable dishes cooked faster than you thought, and now they’re ready a full hour before the turkey will be out of the oven? Do your eyes water uncontrollably after you’ve nearly broken your back climbing into the attic to find the Christmas lights (and then discover that only half the strand lights up)? Do you find yourself overheated when family members decide to extend their vacation and “hang out” for a few more days in your home? Then you, my friend, have got Seasonal Allergies. And you are not alone! 9 out of 10 people have Seasonal Allergies, but nobody has a case worse than Julia Shelby and her brother Peter. So get ready to laugh away your throat tickle, and clear your sinuses with a healthy dose of Holiday Fun. www.majestictheatre.net or (603)669-7469

Hottest Young Comics in New England Featuring NH’s Own Drew Dunn! Drew Dunn started performing comedy at the age of 21 and hasn’t looked back since. This NH based comic quickly established himself as one of the nation’s fastest rising comedians with his quick wit and unique point of view. He has been featured in comedy festivals across the country including the Johnny Carson Great American Comedy Festival as well as being named “Best of the Fest” in the 2017 Burbank Comedy Festival. Ages 18+ www.rextheatre.org or (603)668-5588

Join us for an unforgettable and inspiring performance by New Hampshire’s own 39th Army Band. The 90-minute audio visual experience will also feature some of the best civilian musicians in the State, as we thank veterans from all of the service branches. The performance will include a wide variety of music genres including: rock, country, pop, jazz, and of course, patriotic classics. We invite veterans of all ages, their families, and the general public to this memorable event. Tickets for this event are free and expected to go fast, so get your tickets today! www.ccanh.com or (603)225-1111

A musical tribute consisting of three musicians igniting the flames of country legends Willie Nelson, Waylon Jennings, and Johnny Cash. Full bios of the performers and info. at www.rextheatre.org or (603)668-5588

World-renowned guitarist Stanley Jordan has developed a new live show called “Stanley Jordan Plays Jimi.” This is a tribute show, but it’s not pure imitation. Instead, Stanley builds on Jimi’s legacy in a creative way. As Stanley explains it, “This is my fantasy Jimi Hendrix concert if Jimi were still alive and playing today. By re-imagining his music and channeling his persona I try to bring that fantasy to life.” This extra touch of portraying the Hendrix of today rather than yesterday keeps the show creative and fresh for both Stanley and the audience and it gives Stanley’s fans a new insight into Stanley’s own evolution. It also makes the show more authentic in a certain sense, because a real Hendrix concert would have surprises and unexpected turns. “Stanley Jordan Plays Jimi” tries to re-create both the energy and the creativity of the real thing. www.tupelomusichall.com or (603)437-5100

Playing the swinging music of the Golden Era of Big Band. The Band was formed in 1982 by the four Freese Brothers: Jack, Bill, George, and Courtland, who began playing music together in a family performing troupe in the 1930’s. The purposes of the Band are to support and encourage the development of the musical talents of the public (especially young musicians) and its members, and to foster an appreciation of music of all eras. Part of the Prime of Life Music Series. www.rextheatre.org or (603)668-5588

Bedford Off Broadway presents this comedy by Christopher Durang. Middle-aged siblings Vanya and Sonia share a home in Bucks County, PA, where they bicker and complain about the circumstances of their lives. Suddenly, their movie-star sister, Masha, swoops in with her new boy toy, Spike. Old resentments flare up, eventually leading to threats to sell the house. Also on the scene are sassy maid Cassandra, who can predict the future, and a lovely young aspiring actress named Nina, whose prettiness somewhat worries the imperious Masha. Winner of the 2013 Tony Award for Best Play. or at door.

Be sure to visit The WEEKENDER for more featured events out and about town this weekend!