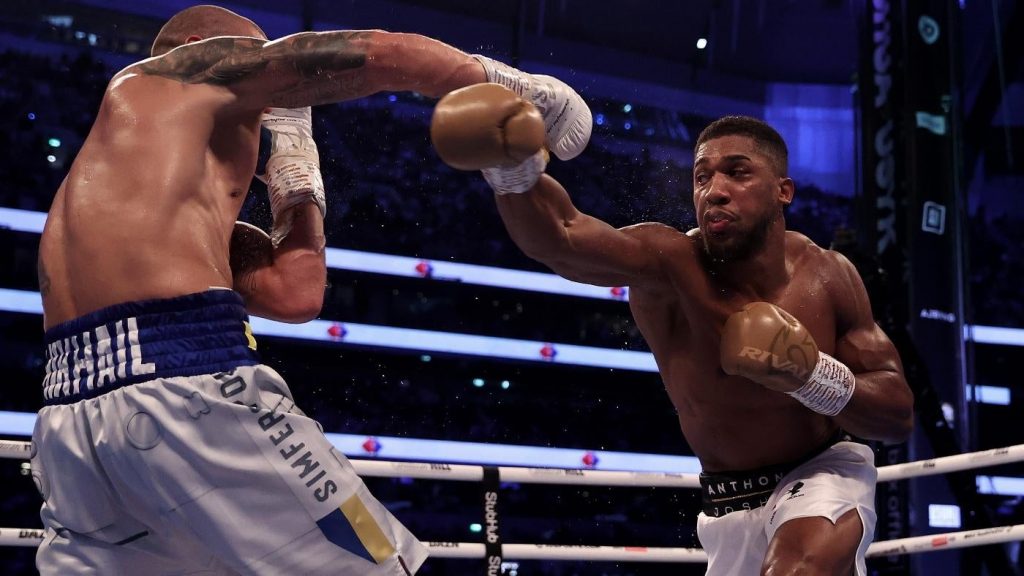 Oleksandr Usyk is out to prove that his first win over Anthony Joshua was no fluke when the heavyweights meet in a championship rematch Saturday. Their 12-round rematch, with Usyk’s three major belts at stake, tops the boxing card from King Abdullah Sports City in Jeddah, Saudi Arabia. The pay-per-view main fight card is set for noon ET. Last September, Usyk won a dominant 12-round decision against Joshua to become a heavyweight champion after he had already accomplished a unified domination of the belts at cruiserweight. Now, he will try to further his status as one of the sport’s emerging stars by winning a rematch with Joshua, who could see his once-massive profile dimmed with another defeat.

Caesars Sportsbook lists Usyk as the -200 favorite (risk $200 to win $100), while Joshua comes back at +170 in the latest Usyk vs. Joshua II odds. The over/under for total rounds completed is 10.5, with the over favored at -140 and the under priced at +120. Before locking in any Usyk vs. Joshua II picks, make sure you see the boxing predictions and betting advice from SportsLine combat analyst Brandon Wise.

Wise, who is the combat sports editor for CBS Sports, is an experienced boxing and mixed martial arts analyst who has consistently provided winning selections for SportsLine members. For the past two years, he has hit numerous boxing selections in big-time matchups.

For instance, Wise called for Gervonta Davis to win in Rounds 1-6 (-110) against Rolando Romero for the WBA regular lightweight title in May. Davis scored a sixth-round stoppage to give Wise’s followers another winner, and the under 6.5 rounds (-130) that Wise predicted also connected. Moreover, last November he predicted a stoppage victory between rounds No. 10 and 12 for Canelo Alvarez against Caleb Plant in their super middleweight unification bout. The proposition wager paid +450 and Alvarez stopped Plant in Round 11. Anyone who has followed Wise’s combat sports picks has seen massive returns.

Now, with Saturday’s anticipated rematch in sight, Wise has studied Usyk vs. Joshua II from every angle and identified the best value in the boxing odds. You can see his confident proposition and money-line picks at SportsLine.

The first meeting between Usyk and Joshua was basically the byproduct of a failed meeting between Joshua and WBC champion Tyson Fury that was widely considered the biggest fight available in the heavyweight division. But an arbitrator ruled that Fury had to honor his contractual obligation to give Deontay Wilder a trilogy match, so that fight was booked and Joshua vs. Fury was put on an indefinite hold.

Usyk made that matchup even more unlikely when he stepped in and dominated Joshua over the course of 12 rounds to win the WBO, WBA and IBF versions of the belt. Fury recently announced his retirement following a successful defense against Dillian Whyte in April, but few boxing observers believe the WBC champ is hanging up his gloves for good.

In the meantime, Usyk (19-0) can cement his status as the division’s biggest active star should he sweep his rivalry against Joshua (24-2), a one-time prodigy who is now considered an enigma of sorts.

Although Joshua didn’t make sweeping changes following his loss to Usyk, he did switch trainers for the first time in his career and says he believes the move will give him an advantage Saturday.

Joshua parted ways with longtime coach Robert McCracken following the defeat last September in favor of Robert Garcia, who is widely considered one of the top trainers in the sport and has the credentials to back this assertion.

Garcia is a former IBF super featherweight champion who finished his own boxing career with a 34-3 record and 25 knockouts. But he hung up his own gloves for good in his mid-20s to turn his focus toward mentoring other fighters and he has since coached 14 world champions and numerous ranked contenders.

What Garcia and all his fighters have in common is an approach of nonstop pace that aims to break their opponents physically and mentally. Coincidentally, Garcia has never coached a heavyweight champion and recently told the media that he hoped to fill this void on his resume by working with Joshua.

“Heavyweight boxing is the main champion you want to have. It will be special. It will be something huge if I can prepare him to become world champion,” Garcia said. You can only see who to back here.

How to make Joshua vs. Usyk picks

Wise likes the over 10.5 rounds at a price of -140 in the latest boxing odds at Caesars. He’s also made the call on a method of victory prop and a confident money-line pick. You can only see those Joshua vs. Usyk picks at SportsLine.

Who wins Usyk vs. Joshua? And which prop is a must-back? Visit SportsLine now to see Brandon Wise’s best bets for Saturday, all from the CBS combat sports specialist who has crushed his boxing picks the last two years, and find out.