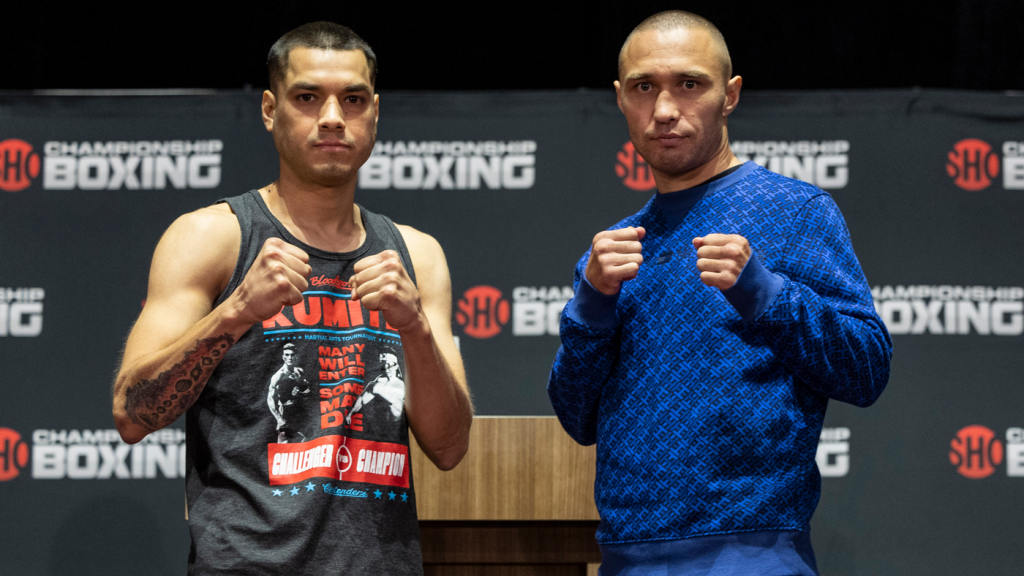 Up until this week, Omar Figueroa was set to face off with Adrien Broner in Saturday’s Showtime Championship Boxing main event. Then, Broner withdrew from the fight, citing a need to tend to his own mental health. With Broner out, former junior welterweight world champion Sergey Lipinets was promoted from a bout on the undercard to the main event against Figueroa (8 p.m. ET, Showtime).

Lipinets is a considerably different type of fighter from Broner, who was once a force in the ring with a combination of speed and power but has been a low-output fighter in the later stages of his career. Lipinets is not an elite fighter, and has faltered when fighting higher-end competition such as Mikey Garcia and Jaron “Boots” Ennis, but he is likely a more dangerous fighter than Broner at this point.

“Obviously we were preparing for a certain style, but the fight fell through, so I just have to take all my experience and the things I’ve learned all these years and apply it toward Sergey,” Figueroa said of the opponent change during the final pre-fight press conference. “He’s no pushover and he’s a former world champion. We know we have our hands full.

Can’t get enough boxing and MMA? Get the latest in the world of combat sports from two of the best in the business. Subscribe to Morning Kombat with Luke Thomas and Brian Campbell for the best analysis and in-depth news, including a preview of this weekend’s action below.

After going undefeated over the first 29 fights of his professional career, including a run with the WBC lightweight championship, Figueroa was dominated by Yordenis Ugas in a WBC welterweight title eliminator in July 2019.

After nearly two years out of the ring, Figueroa again tried his hand at welterweight only to be dominated by Abel Ramos. After seeing their fighter roughed up over six rounds, Figueroa’s corner stopped the fight and saved him from any further damage.

Figueroa, a natural lightweight, is now moving back down to junior welterweight, which is a better fit than welterweight, where he was twice overwhelmed by bigger, stronger opponents and unable to generate enough power to disrupt his opponents from bullying him around the ring.

At the pre-fight press conference, Figueroa seemed to be straddling the line between accepting his career may be reaching its conclusion and the natural fighter’s instinct to view their career as far from over.

“If this is my last fight, I’d be happy with that,” Figueroa said. “But I know I’m not done, and I have a lot left in the tank. I love this sport too much and there’s not anything else that would fulfill me the same. I’m excited for Saturday. I’m pumped like I’ve never been before.

“I finally got to enjoy myself and I think I’m going to enjoy Saturday night. I’m looking forward to a war with Lipinets.”

“My last fight showed me I can go 10 rounds strong. I never really deteriorated throughout the fight and there was never a question that I could be strong from Round 1 to Round 10,” Lee said at the final press conference.

“I never overlook my opponent because at the end of the day, he has two hands and you have to respect anyone that steps in the ring. I’m going to go in there and do what I do, which is get the knockout. So today I’m 25-0 and come Saturday night it will be 26-0.

Unfortunately for Figueroa, Lipinets is a bad matchup. Figueroa’s work-rate may have been enough to carry him past Broner, should Broner have brought his now-standard low output style to the ring on Saturday night. But Lipinets is going to bring the fight and Figueroa has only fought once since 2019. Lipinets is also not stepping in without the benefit of a camp, he has been training and will be in ring shape come Saturday night. It should be a fun fight with both men knowing there’s a lot on the line for their futures, but Lipinets is likely to walk away with this one. Pick: Sergey Lipinets via UD