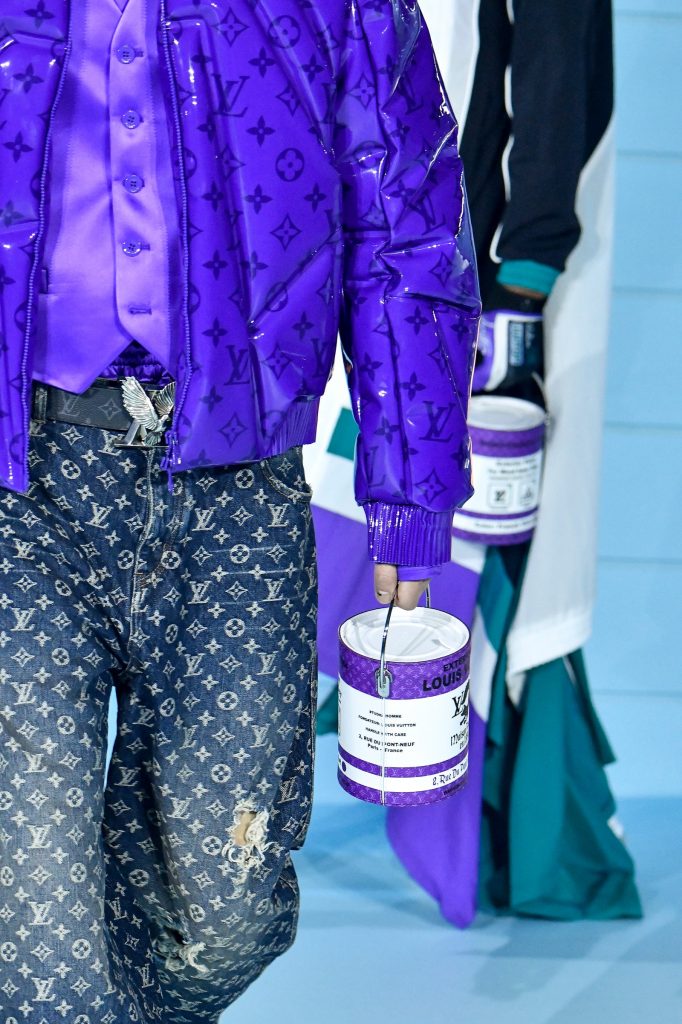 If you’re in the market for a new bag, scanning through this season’s offerings feels a lot like rummaging through the lost and found. While many Balenciaga’s Trash Pouch—which cranks the knobs on price ($1,790) and derelicte fashion up high enough to enrage all onlookers—has racked up the headlines, Demna isn’t the only designer suggesting that the next It Bag can be whatever you have laying around.

There’s Marni’s new tote, a basketball tank sewn at the bottom (cool enough that I’m considering repurposing my old New Jersey Nets Vince Carter jersey). The headlining new bag from Louis Vuitton? A product of the last Vuitton collection designed by the late Virgil Abloh, and a very Virgil project at that: special series of colorful paint cans designed to be worn crossbody. And as of late last year, Doublet’s series of repurposed stuffed animals are no longer exclusive to Japan. (Even trash lovers are invited to the party: see J.W. Anderson’s pigeon clutch—a high-fashion and 3D-printed ode to our rattiest bird.)

Although all these designers have reached the same conclusion (that anything can be a bag), they seem to have trekked different roads to get there. Balenciaga’s Trash Pouch came out of the house’s fall/winter 2022 show—you remember, the one that was housed inside a high-fashion apocalyptic snowglobe. Models, tilted by the wind, beat back the elements as with only their thigh-high boots and jumpsuits. Many of them carried the instantly infamous Trash Pouch. (Incidentally, I love this totally dry and completely obvious single-line description of the item in Balenciaga’s notes from the show: “The Trash Pouch is inspired by a garbage bag.” Thanks.) The Trash Pouch is Demna’s reaction to an impending cataclysmic event, one in which the fashion and apparel industry is deeply implicated. In the context of a clothing industry dominated by fast-fashion companies like Shein, the Trash Pouch feels foreboding, like an ominous warning of where we’re headed after our TikTok hauls and trendy $8 tops.

Don’t worry, though: not all of these rubble-rousing designers seem to have slogged through The Uninhabitable Earth. Take LV’s paint cans, for example—although they share the one-man’s-trash philosophy, their source material seems to lean closer to Abloh’s long-held interest in Marcel Duchamp. The paint cans are not unlike the French artist’s Readymade objects: quotidian items that, looked at from a slightly different angle, become art. “One way V reimagined the world was through his rule of three percent, which he considered the exact amount of creative reworking needed to transform an everyday object into a work of art,” curator Antwaun Sargent wrote in a remembrance of the designer earlier this year. Render a paint can in beautiful, vivid shades, splash it with some Louis Vuitton branding, attach a strap, and voilà: It Bag. (In a fitting tribute to its designer, the copy on LV’s site brags the bag is “roomy enough to hold two phones”—a necessity for a WhatsApp obsessive like Abloh.) And it appears there’s more where that came from: the most recent Louis Vuitton runway show featured bags resembling high-sheen plastic-looking bags.