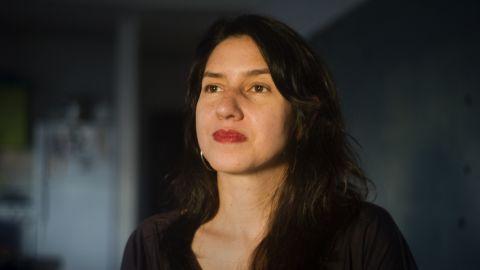 Editor’s Note: Michelle García is the author of a forthcoming non-fiction book about the US-Mexico border. She is the 2021 winner of the American Mosaic Journalism Prize and the Covering Climate Now Award. She tweets @pistoleraprod. The opinions expressed in this commentary are her own. View more opinion on CNN.

During the recent political hysteria surrounding the US-Mexico border, I took a stroll around my new neighborhood in South Texas, near the Rio Grande. It was a nice day – not too hot or humid.

Govs. Ron DeSantis of Florida and Greg Abbott of Texas were using people as political billboards by sending people released by border agents to cities across the US. Just weeks later, the Biden administration would soon send its own border message by making a deal to turn many Venezuelan asylum seekers back to Mexico.

Against this backdrop, as I was walking, I glanced up at the border wall and locked eyes with a Border Patrol agent cruising along on an all-terrain vehicle. Moment later, the agent suddenly appeared alongside me, and asked, “Where are you going?” Knowing he was exceeding his authority, I didn’t answer, and likely for the same reason, he didn’t insist – but soon other agents showed up to monitor my walk.

Another Border Patrol agent, in a video recorded earlier this year by the National Butterfly Center in the Rio Grande Valley, claimed it was his job to identify anyone and everyone along the border, a staggering overreach. Texas guardsmen have told me, with no basis, that the area around the river is off-limits.

Such encounters reflect the political messaging that dominates border politics: the border is the domain of law enforcement, a lawless site requiring relentless warfare. Imagined as a remote outpost by many Americans, the border has long been perceived as distant to US life. But border politics powerfully influences state and federal elections and public spending, and fortifies an expression of national and identity politics.

Without an alternate border vision, Americans of all political backgrounds are subjected to demagoguery and delusional narratives that offer no solutions to the real challenges of managing migration at the 1,933-mile southern boundary.

Americans must retake their border and wrest it from a violent politics in which anything less than admitting to a “border crisis” that requires more agents, drones and sensors is often mocked as support for an equally ambiguous “open borders” policy.

Distorted border politics exist on such an extreme level that journalists and pundits describe Gov. DeSantis’ tactics as a “stunt” and debate how it might play with voters, while the people used in the “stunt” are certified as crime victims by a Texas sheriff. And that possible crime later earned DeSantis standing ovations in Wisconsin and Kansas. (A DeSantis spokesperson said the flights were a voluntary program to give those on board a “fresh start.”)

Amid this political climate, two brothers were arrested and charged with shooting at people migrating through rural Hudspeth County, Texas. Survivors told police the gunmen shouted something to the effect of, “Come out you sons of bitches, little asses,” before one of them fired two rounds. One person died, and another was injured.

And in a county neighboring El Paso, three years ago, a gunman who made references to the racist “replacement theory” in an online statement attributed to him by investigators, killed 23 people at a Walmart after driving more than 10 hours from a Dallas suburb. The gunman, according to the online statement, was motivated by demographic changes, which he described as an “invasion.” That characterization resembles statements made by politicians including Gov. Abbott and align with messaging from the president of the Border Patrol Council, Brandon Judd, who criticized the Biden administration’s immigration policy in May and said, “I believe that they’re trying to change the demographics of the electorate; that’s what I believe they’re doing.”

Before election deniers started trying to dispute reality, border security politics had already primed Americans for political delusions, with a border politics likewise divorced from reality, a fantasy world in which politicians simply show up at the border, pose with agents, say “crisis” and have it taken as fact.

Border delusions dismiss facts and ignore data by the agencies responsible for securing the border. According to reports by the US Department of Homeland Security, for five years, Border Patrol has largely met its own targets to “secure the US border between ports of entry.” Agents have met targets that include: “respond and assess potential illegal activity” quickly in remote areas and interdiction. Surveillance of the border has reached such a saturation point that Border Patrol retired the measure, according to a Border Patrol performance report.

But data and facts seem to do nothing to stem the relentless demand for a limitless and relentless campaign of warfare.

Delusional politics cost all Americans and paralyzed the nation between 2018 and 2019 when a dispute over border wall funding between then-President Donald Trump and the Democrat-controlled House of Representatives resulted in the longest-running government shutdown in history. A deal was reached that included $1.375 billion to build barriers along the border, and Border Patrol claimed simply “Walls Work.”

But that statement was made without the backing of conclusive evidence.

DHS had failed to develop metrics to gauge the effectiveness of border barriers for almost two decades beginning in 2005, according to the Government Accountability Office, the nonpartisan agency that monitors congressional spending.

Billions of tax dollars were spent, dozens of federal laws waived, hundreds of acres of farmland and private property along the Rio Grande seized for a wall with no proven value, except for its political usefulness. DHS finally provided the GAO with a demonstration of its model to assess effectiveness in January of this year. In a statement, US Customs and Border Protection declined to disclose its assessments, stating the model is “law enforcement sensitive” and “continues to be in development.”

To the promoters of a violent border vision, the sight of newly arrived asylum-seekers and images of state troopers and Texas guardsmen on the Rio Grande is all the evidence needed to claim the government has failed to “secure the border.”

Politicians like Gov. Abbott have used these claims to justify his headline-grabbing campaign to send immigrants to US cities – just one aspect of “Operation Lone Star,” the multi-billion-dollar border security initiative that he launched last year. Abbott boasts the operation has resulted in thousands of arrests of dangerous criminals and the apprehension of immigrants.

But throughout the initiative, the governor’s office and the state police, the primary agency tasked with the campaign, have largely resisted the release of basic arrest records to back up their claims to me and other journalists.

Meanwhile, the preliminary and incomplete data provided by the state in the form of spreadsheets shows that Abbott and his office have hailed the success of Operation Lone Star, citing what the Texas Tribune, ProPublica and Marshall Project described in their investigation as: “accomplishments that lacked crucial context or did not match reality.”

But how should the American public as well as the government respond to people arriving at the border for reasons that include persecution, political and economic instability?

Americans can begin retaking their border by backing a fact-based paradigm to managing the border. They can insist the US resist the lawlessness of border politics and uphold its treaty obligations to process asylum seekers. Immigration policy experts say decades of an enforcement-centered approach on the border has left infrastructure neglected and underfunded. “People need to see a process that is orderly,” Cristobal Ramón, an immigration policy adviser, told me. “Ports of entry need to be completely overhauled to process people.”

It will take political and grassroots leadership that centers on a functioning border. “You need to level with people, and that means speaking back about the realities at (the) border,” Ramón said, “and this comes down to being able to tell them what’s happening.”

But many Democrats have resisted changes, partly because of perceptions that equate people arriving at the border with lawlessness.

The Biden administration recently reinforced this perception by adopting a new policy that permits “authorized” Venezuelans to arrive by airplane, while those crossing the land border may not seek asylum. Asylum, under law and treaty, is available to anyone who arrives at the US.

Ongoing capitulation of violent border politics has cost Democrats voters and may continue to do so. Border security rhetoric was critical to Trump’s victory in 2016. Republicans made gains among South Texas voters in 2020, partly the result of years of photo ops and policy rollouts among other investments. “Republicans owned the border issue” in South Texas without any “meaningful competition,” according to an in-depth analysis of the 2020 election by Equis Research, a Democratic-leaning group with a focus on Latino voters.

But this election, some candidates have denounced violent border politics. First-time candidates such as Michelle Vallejo, who is running for a South Texas congressional seat, and Rochelle Garza, the Democratic nominee for Texas attorney general, are running on platforms that reclaim the border from delusional narratives – and violent slogans — while pushing for effective policies.

Vallejo, who has called for making the asylum process more efficient, is running against Monica de La Cruz, who has campaigned on what she calls a “crisis” and “brewing disaster” at the border. Vallejo has accused her opponent of using the border for photo ops and promoting a vision that it is a violent site of desolation, bereft of beauty and even people. Meanwhile, Garza has separated hysteria and delusion from substance and solutions, telling me last year that Border Patrol is needed while pushing back against narratives of a “made up invasion.”

And Abbott’s and DeSantis’ efforts to cast migrants as problem people largely failed after communities in Washington, DC, New York and other cities responded – much as Texas border communities have for years – by welcoming newcomers.

On the Rio Grande, the National Butterfly Center, which sits on the river, has resisted government overreach through a legal battle accusing agents of harassing staff and guests and operating unlawfully in trying to build a wall through the center’s land. The center’s executive director, Marianna Treviño-Wright, wages a one-woman campaign against distorted perceptions of the border by hosting media tours of the river that highlight the region’s natural beauty and the ecological destruction caused by border walls. And I regularly visit the river for a close look at the border, free of violent delusions.