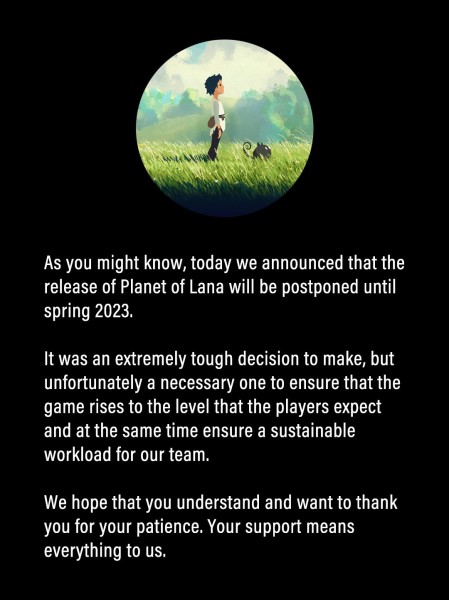 Another one bites the dust. If you haven’t noticed, a number of high-profile delays have occurred in recent weeks, with many upcoming games pushed into next year. Unfortunately, the promising sci-fi platformer Planet of Lana joins that growing hit list.

Planet of Lana was first announced at E3 2021 with a 2022 launch window. The game stars Lana, a young girl, and her adorable cat-like companion Mui on a combat-free mission to preserve a serene planet occupied by robots and other creatures from corruption. Developer Wishfully Studios wants this cinematic puzzle platformer to make a big splash, announcing it’s pushing the release to spring 2023 to do so.

As you might know, today we announced that the release of Planet of Lana will be postponed until spring 2023.

It was an extremely tough decision to make, but unfortunately a necessary one to ensure that the game rises to the level that the players expect and at the same time ensure a sustainable workload for our team.

We hope that you understand and want to thank you for your patience. Your support means everything to us.

Planet of Lana will be playable at Gamescom next week, so attendees have the opportunity to see how the game is shaping up first-hand. The title is slated to launch on Xbox consoles (including Game Pass) and PC.

If you’re losing track of every big game to slip into 2023, this handy list should serve as a nice reminder.