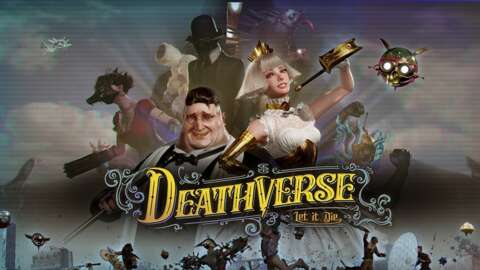 Players get a Wilson device, a weapon that comes in a variety of forms from katanas to what looks like a scissor-saw combination. The Wilson can also become a protective drone, serve as a skill activator, and shoot electric bullets. Upgrading the Wilson will lead to unlocking a variety of other weapon forms, but as of now, the process is a secret.

Your battles will be narrated by Bryan Zemeckis, a charismatic presenter with a mouthful of gold teeth and lots of gold elsewhere, and Brenda Miller–a former champion who now has switched to commentating.

There’s also a third party in survival rounds–a mysterious gunman called Hunters who assassinates contestants. For fun? For money? For the ratings? Who knows?

Deathverse: Let it Die had its first two days of open beta in May and June. On August 3 at 3 PM PT / 6 PM ET, Supertrick and Uncle Death (Let it Die’s mascot-esque character) will hold a gameplay livestream and share more info about details learned from the beta period.

Deathverse: Let it Die will release on PC and PlayStation sometime in 2022. The full game originally had a Spring 2022 release window, but now that we’re entering Summer, it’s unknown what the game’s new release period will be.