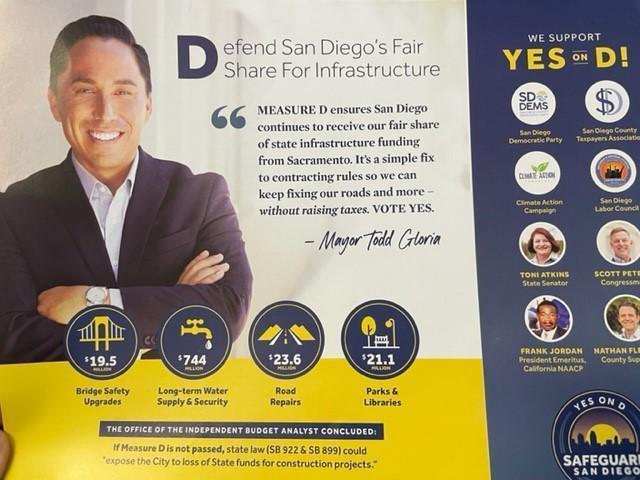 Two of San Diego’s long-time presumed sacred cows are on the ballot this year, but it’s a move to repeal a 10-year old measure that is generating the most campaign spending.

Voters will decide whether to change the 100-year-old “People’s Ordinance,” which bars the city from charging a fee for trash pickup to residents of most single-family homes, or the 50-year-old coastal height limit, by removing the Midway community from that limitation on new buildings over 30 feet tall.

But, by far, the most money being spent on ballot measures in the city of San Diego is going instead to Measure D, the effort to repeal a 10-year-old law that barred the city from requiring “project labor agreements” on city construction projects.

It’s not even close.

Committees both supporting and opposing Measure D have so far spent nearly $3.2 million. About 57 percent of that spending has been in favor of the initiative, primarily coming from labor unions.

The trash and height limit measures – Measures B and C, respectively – meanwhile, have combined to receive about $579,970 in campaign spending so far.

In other words, social media fighting and media attention – very much including Voice of San Diego, obviously – has overwhelmingly focused on changes to the People’s Ordinance and coastal height limit, but the establishment players in local public affairs care far more about the city’s PLA ban, at least based on their spending behavior.

One simple explanation for that discrepancy is that there are tailor-made funders on both sides of Measure D. Construction unions that benefit from PLAs, which set wage and benefit standards for construction projects and require contractors to hire through union halls, have poured money into the Yes on D committee, as have their allies in the San Diego political world.

Contractors who supported the PLA ban back in 2012 and have fought the city over in court over that measure’s application have done the same.

The bid to allow the city to charge all residents a fee for trash collection, though, doesn’t have an obvious party willing to fund a campaign – nor has anyone who opposes the change come through with much money to stop it.

The primary committee funding Measure B is led by Council President Sean Elo-Rivera, and it’s a joint committee supporting Measure C as well. Its biggest funder has been the political action committee run by the Municipal Employees Association, the city’s white collar union. That group has put $234,000 into the committee, between donations and its own spending on yard signs and polling.

Measure C, meanwhile, does have an obvious benefactor: Midway Rising, the development group selected by Mayor Todd Gloria and the San Diego City Council to build 4,000 homes and a new Sports Arena in the Midway community. That still hasn’t resulted in an especilly well-funded campaign, at least by the standards of citywide measures. Midway Rising has put $460,000 into a committee supporting Measure C, led by Councilman Chris Cate. The committee has so far spent less than that – at $314,899 – leaving the campaign some $165,000 to spend. All of that money from Midway Rising head Brad Termini has come in over the last three weeks.

There hasn’t been much money spent against either Measure B or Measure C. What has come in though came from a group called Reform Local Government PAC – it has spent $32,500 in opposition to the coastal height limit change, primarily by buying onto a voter guide mailer produced by Reform California, the statewide committee run by talk radio host Carl DeMaio.

We heard from Geoff Page, the journalist/activist helping lead the fight against Measure C, which would remove the 30-foot building height limit for the Midway-Pacific Highway Community Planning Area. Last week, he had led a rally at the Capri by the Sea building in Pacific Beach, the building that led in part to the initiative that set the 30-foot limit.

Later that week, in responding to online criticism of the choice of the location, Page took to Twitter. One person said it was Midway’s time and signed it “a PLHS alumni and current coastal zone resident.” Page then quoted the post-Holocaust poem, “First They Came.” Scott pointed out that poem was a warning about how not to behave when something like the Holocaust is beginning.

Page’s response: He was pretty upset that we interpreted his quoting the Holocaust poem as him comparing what they were facing to the Holocaust. Here’s Page: “The poem came out of the Holocaust experience, no argument there. But, that description of the poem is a narrow interpretation that does not do the poem justice. The poem Is much more than just that, it warns against the danger of thinking isolationism will keep you safe.”

You can read his full letter to us here.

But here are two more passages: “Lewis also stated that the ‘Capri by the Sea is nowhere near the area affected by Measure C.’ That is true. It sits on the highest bluff in Pacific Beach and was the building that sparked the 30-foot height limit.

“Lewis continued, ‘the height limit would remain in effect there regardless of the outcome of the initiative.’ This is also true. But, for how long? If Measure C passes, it would be a serious crack in the protective shell that is the 30-foot height limit.”

School board race getting mean: The race to represent the coastal district on the five-member Board of Education of the San Diego Unified School District is a tough one between Republican Becca Williams and Democrat Cody Petterson. Thursday, two mailers landed in mailboxes, both with inadequate, or no, disclosure of who sent them.

First: There was another attack on Williams for being from Texas. “Too Extreme For Our Schools” it reads and once again highlights a cowboy hat. Cowboy hats are just not welcome in San Diego it seems.

It highlighted a supposed quote from Williams that COVID “was not a threat for kids” and then cites our profile of her as the source. But we never quoted her saying that. Here was writer Jakob McWhinney’s summary of her points:

“COVID-19 was a serious disease, she said, but cloth masking in classrooms does not work and officials needed to consider a wider range of variables when implementing mask mandates, like children’s ability to build friendships and community, their breathing and dignity.”

Worse: The mailer has no attribution for who sent it or paid for it.

Political consultant Dan Rottenstreich acknowledged it was one of his products and the San Diego Education Association, the teachers union, paid for it. He said it was a mistake he took full responsibility for that it didn’t have a full disclosure statement and that he proactively reported the violation to the Ethics Commission.

On the other side: A group called The Community Leadership Coalition sent out a mailer hammering Petterson with no clarity on who actually paid for it. “Beware of political activist Cody Petterson this Halloween.” Then there are these random concepts “failing schools” “struggling students” and “anxious teachers” around him.

The online filing for Community Leadership Coalition cites Francis Barraza, the chief of staff of Councilman Chris Cate, as a principal officer. You can see the funders of it on this disclosure. They include longtime Lincoln Club members David Malcolm and Michael Turk along with port tenants and restaurants.

Imperial Beach campaign in the sewage: The race for Imperial Beach mayor has also gone bad. A mailer slamming Democrat Paloma Aguirre has no disclosure of who paid for it.

It says Locals for Imperial Beach paid for it but there’s no such group we can find. A tense dispute about a mobile home park in IB has become part of the mayor’s race. The park’s owner now accounts for a big portion of all the funding of Aguirre’s main opponent, Republican Shirley Nakawatase.