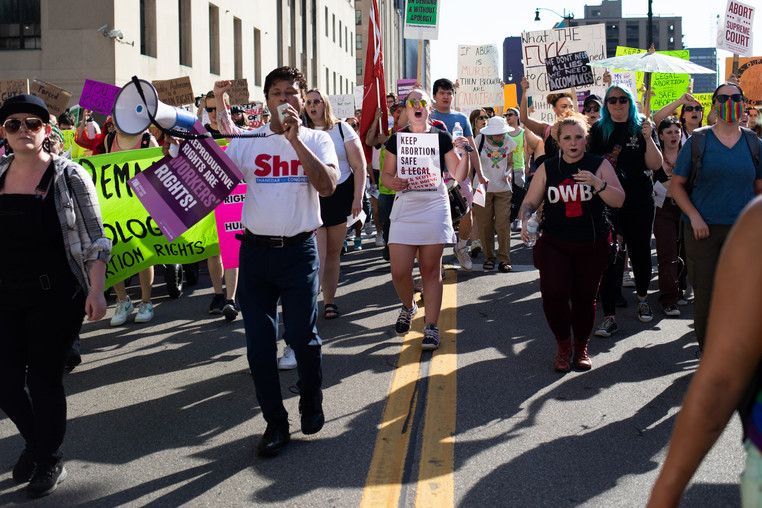 With help from Calder McHugh and Myah Ward

‘CHECKERS INSTEAD OF CHESS’ — Even Democrats who were initially skeptical about the political effect of Roe v. Wade’s overturning have by now come around to the idea that it’s significantly altering the midterm election landscape. They’re even more convinced after Democrats won a special election they had no business winning in New York on Tuesday night.

But if the shifting political winds are encouraging for Democrats, they have also swept in a new round of second-guessing about how much more damage the party could have avoided in November if it’d seen the issue’s potential sooner.

A year ago, “when we knew this eventually was going to happen,” grumbled one Democratic strategist who advises major donors, why weren’t Democrats preparing to put abortion-related initiatives on ballots across the country to juice turnout?

That’s what Republicans did in 2004, when the cultural flashpoints of the day appeared to favor the GOP more than Democrats. That year, conservatives orchestrated the placement of anti-gay marriage measures on ballots in 11 states to lift turnout. Karl Rove knew what he was doing.

Abortion rights activists in Michigan, a critical swing state, have submitted signatures to qualify a measure for the November ballot, and similar measures are ready to go in Vermont and California.

But an effort to qualify an abortion-related ballot measure in Arizona fell short last month. When voters in deep-red Kansas rejected an anti-abortion ballot measure, it took everyone — Democrats included — by surprise.

One pro-abortion rights political strategist said Democrats are playing “checkers instead of chess.”

“Why wasn’t anybody working on this ages ago? That’s my frustration,” she said, “Everybody knew this was going to happen. The writing has been on the wall forever.”

There are any number of reasons that Democrats are not running abortion rights measures all over the country. Ballot measures are expensive, and lots of states restrict them. It takes time to qualify — by the time the Supreme Court’s Dobbs ruling came down in June, it was too late to get much on the November ballot.

What’s more, abortion traditionally had been a motivator for Republicans more than Democrats. Just ask Terry McAuliffe, who made abortion a centerpiece of his gubernatorial campaign in Virginia last year, only to see it wither as an issue. Of the voters who cared the most about it, a majority voted for his Republican opponent, Glenn Youngkin, according to exit polls.

Against that backdrop, there were reasons to think putting a raft of abortion-related measures on ballots in 2022 might backfire.

But now that every sign is that it would boost Democratic prospects in November, it’s starting to look more like a missed opportunity.

In Arizona, abortion rights activists are now looking at the 2024 ballot. Democrats are talking about it in other states, as well.

That won’t do them much good in the midterms, though. Amy Fitch-Heacock, one of the organizers of the effort in Arizona, said that if her group had just two more weeks to collect signatures, it could have qualified its measure for this year’s ballot.

Nationally, it wasn’t until the disclosure of the court’s draft opinion on Roe in May, she said, that people were “screaming and clamoring.” Before that, Fitch-Heacock said, “We saw people thinking there’s no way that Roe will be entirely overturned.”

She said, “It was really frustrating for those of us who could see the writing on the wall.”

Programming note: POLITICO Nightly won’t publish from Monday, Aug. 29, through Monday, Sept. 5. We’ll be back in your inboxes on Tuesday, Sept. 6.

FORGIVENESS FINE PRINT — While most reporting on President Joe Biden’s student debt announcement is focused on the top-line numbers, a provision hidden within the plan could make a big difference for some borrowers, writes Nightly’s Calder McHugh.

The Biden administration plan would “cover the borrower’s unpaid monthly interest, so that unlike other existing income-driven repayment plans, no borrower’s loan balance will grow as long as they make their monthly payments.”

Currently, many people use income-driven repayment programs, which means that a portion of their income — usually 10 percent — goes to paying back their loans. But if you aren’t making much money in the first place, the percentage of your income that you’re giving to your loan provider might not even cover the interest on your loan. This has meant that many Americans have been on repayment programs for years, diligently making payments, but have nevertheless watched the balance of their loan go up. Now, that’s changing.

According to Marshall Steinbaum, senior fellow in higher education finance at the Jain Family Institute and assistant professor of economics at the University of Utah, “This new repayment plan would seem to simply ignore the unpaid interest, in addition to lowering required payments from 10 percent to 5 percent of discretionary income.”

This could mean that beyond the one-time $10,000 or $20,000 lump sum of forgiveness, many borrowers could end up owing much less in loan repayments thanks to forgiven interest.

“[This part of the plan] would amount to a significant ongoing student debt cancellation above and beyond the immediate plan announced today,” Steinbaum said.

— Trump Interior Secretary Zinke lied during casino investigation: The Interior Department’s internal watchdog said former Interior Secretary Ryan Zinke lied to investigators who were probing whether he wrongly blocked two native tribes from opening a casino in Connecticut in 2017 — and that he pressed the office to postpone today’s report until after the November election that he is hoping will return him to Congress.

— Maloney loss prompts Dem pileup for top spot on investigative panel: Multiple Democrats are already fighting to take Rep. Carolyn Maloney‘s top spot on the influential House Oversight Committee, less than 24 hours after her primary loss to Rep. Jerry Nadler. Rep. Gerry Connolly (D-Va.), a senior member of the committee, quickly became the first to jump into the ring, touting both his experience on the committee and his willingness to tangle with Republicans. But his announcement didn’t clear the field. Rep. Stephen Lynch (D-Mass.) also said in a letter to colleagues on today that he was seeking the post, and there are signals that Reps. Jamie Raskin (D-Md.) and Ro Khanna (D-Calif.) are interested in running as well.

— First lady tests positive with rebound Covid case: First lady Jill Biden today tested positive again for Covid-19, a so-called rebound case of the virus similar to the one her husband dealt with earlier this summer. “After testing negative on Tuesday, just now, the First Lady has tested positive for COVID-19 by antigen testing. This represents a ‘rebound’ positivity,” Kelsey Donohue, the first lady’s deputy communications director, said in a statement today.

— Biden announces new head of Secret Service: Biden has appointed Kimberly Cheatle to be the next director of the Secret Service. Cheatle’s career with the agency spans more than 25 years. She has served numerous leadership roles within the Secret Service, including becoming the first woman to serve in the role of assistant director of protective operations, in October 2019.

The uncertainty of what’s ahead weighs heavily on the Ukrainian population, Róisín Mangan, Save the Children’s senior humanitarian advocacy manager, told Nightly today. Those concerns were amplified this week as the U.S. warned that Russia was stepping up efforts to attack civilian infrastructure in the coming days.

“There’s actually nowhere safe right now in Ukraine because of the unpredictability,” said Mangan, who’s based in Kyiv.

Six months of war has been especially hard on children, said James Elder, a UNICEF spokesperson who’s on the ground in Kyiv. An estimated 972 children have been killed or wounded, though this is likely an undercount. The injuries are “ghastly,” Elder said, telling the story of a mother he met this week who was waiting for her 10-year-old to come out of surgery after he was wounded by a bomb. Another mother left the hospital without her 15-year-old daughter, who died after surgeons were unable to mend her injuries.

Then there’s the mental and emotional trauma. Even today, air raid sirens blared almost every other hour in Kyiv. Mothers have told Elder that old tactics, like telling their young children they were playing a game like hide-and-seek when going into the bunker, no longer work.

“There are hundreds of thousands with wounds you can’t see,” Elder said. “UNICEF unfortunately has learned from Syria or Yemen or Afghanistan that the longer the war engulfs the country, the more likely that trauma is to scar children.”

The war’s effects on children will be particularly evident on the first day of school next week, typically a day of celebration in the country. Ukrainian children usually start the school year by dressing up and bringing flowers to their teachers. Now, UNICEF estimates that one in 10 of the country’s schools have been destroyed.

Some parents are eager to send their kids to a classroom, just so their child can feel just a bit of normalcy, Elder said. Others are too afraid to let their child out of sight and will stick with online learning — something the country adapted well to during Covid.

Groups like UNICEF have helped build bomb shelters at schools for extra protection, and community members have come together to rebuild playgrounds. Save the Children is working with the government to make sure kids have laptops and internet access for online learning.

The work doesn’t stop there. Aid groups are already preparing for the “bleak winter” ahead, Mangan said. The start of the school year is one worry, but for other parents, they no longer have a home or the resources to take care of their children. Aid groups are rushing to provide these families with cash funds and necessary supplies like food, coal and fuel in order to survive the winter months.

The amount of money the IRS will refund in penalties to 1.6 million individual and business taxpayers who were fined for not filing tax or information returns on time for 2019 and 2020, as the pandemic disrupted the economy and led to a pileup of unprocessed returns at the agency. The penalty relief — detailed in an IRS notice — is automatic, so taxpayers won’t have to apply for it.

OUTSIZE OFFICE — The fate of Biden’s agenda could soon rest with the administrator of a tiny office deep within the White House, writes Adam Cancryn.

But first, Biden needs to decide who that administrator will be.

After leaving the office without a permanent leader for the first 18 months of Biden’s presidency, the White House is closer to picking someone to run its Office of Information and Regulatory Affairs. The obscure unit is nonetheless poised to wield outsize influence over the administration’s policy ambitions, especially if Democrats lose control of either congressional chamber this fall.

The office serves as a gatekeeper for rulemaking government-wide, coordinating, vetting and approving hundreds of federal regulations each year. It has final say over which agency priorities get fast-tracked and which get put on ice, and it will play a direct role in implementing major elements of Democrats’ just-passed climate, health and tax law.

“The future of the Biden agenda rests on how efficiently large groups of people can edit Word documents,” said one administration official. “When everyone’s aligned, they can move fast. But sometimes, it’s death by a thousand cuts.”

Did someone forward this email to you? Sign up here.