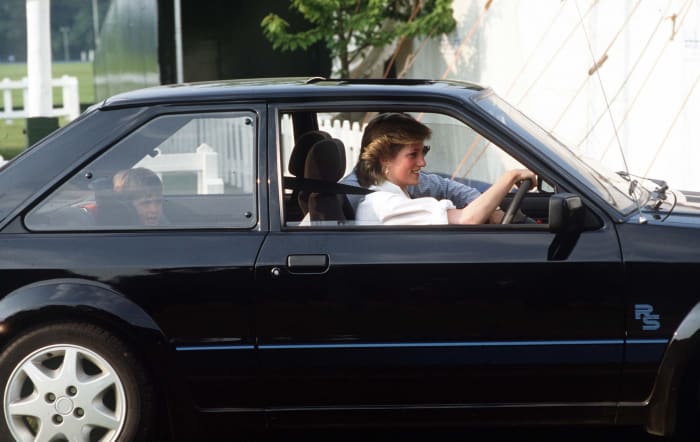 Another famous vehicle has gone to auction. This time, it’s a black Ford Escort that once belonged to Princess Diana. The historical vehicle sold at auction on Saturday, Aug. 27, for £724,500, according to Silverstone Auctions. That amounts to a whopping $851,250.55.

The auction house’s listing for the vehicle says that the car, a 1985 Ford Escort RS Turbo S1 that was ordered with several safety modifications specifically for the late princess, came from a private collection. Princess Diana only drove the car for about three years, racking up only 6,800 miles, before it transferred ownership several times throughout the last 34 years. Despite multiple owners, it was kept in “exceptional condition.”

Reported to be the first and only black car in the series with an odometer reading of fewer than 25,000 miles, plus the varied history accompanying it, certainly made the Escort a desirable choice for any collector.

According to the BBC, the bidding war was full of tension as people from the U.K. and beyond fought to purchase the piece of history.

The publication reports that auctioneer Jonathan Humbert was shocked by the continued climbing of the price, which began at £100,000. The firm received its largest number of bids by phone in 12 years, but in the end, it came down to a potential buyer in Dubai battling one from Cheshire, a county in northwest England, after all of the other bidders dropped out around £450,000.

“£500,00 for a Ford Escort? I’ve never said that before,” Humbert commented at one point. Eventually, the U.K. bidder won. The BBC reports that after the additional fees were calculated, the new owner paid a total of £730,000, or $857,712.77. There’s no word yet on what they’re planning to do with the vehicle, but the sale comes just four days before the 25th anniversary of Princess Diana’s death.