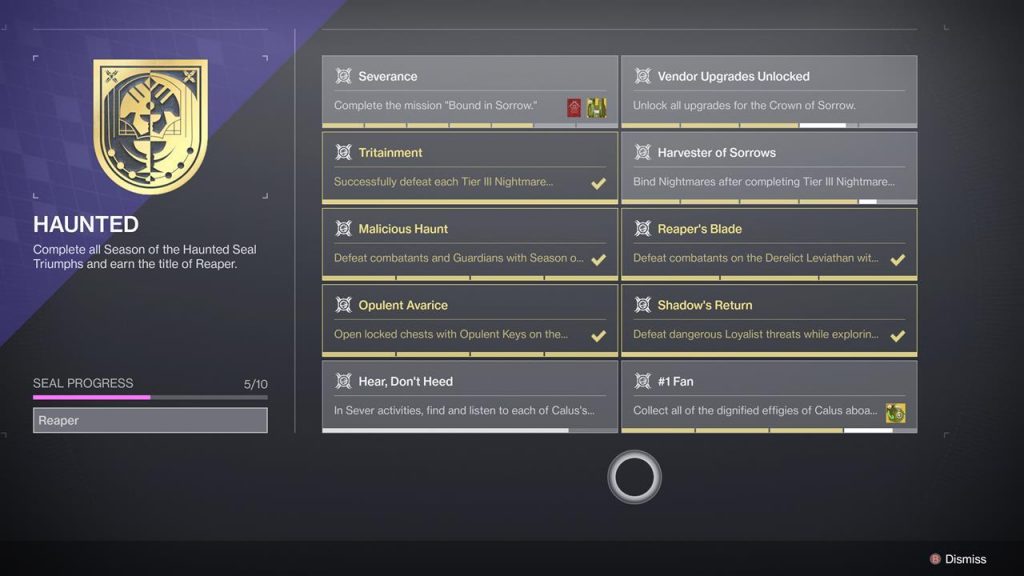 Like several seasons before it, Destiny 2’s Season of the Haunted has brought a new title that players can chase after. Titles don’t add anything of tangible value to the game, but they do represent a challenge that pays off by reminding everyone around you just how much time and effort you poured into Destiny 2.

Currently, the Reaper title is up for grabs and also happens to be one of the easiest titles to earn in Destiny 2, especially when compared to previous credits. While the Reaper title isn’t difficult to obtain, it is a time-consuming pursuit and requires a player to spend regularly engage in the Nightmare Containment event, tackle each weekly Sever mission, and chase down some elusive enemies in the Derelict Leviathan.

To obtain the title, you’ll need to complete these challenges:

The majority of these challenges can be accomplished while engaging in Nightmare Containment, playing Sever missions, and exploring the Derelict Leviathan. You can check out our Calus Bobbleheads locations guide for No. 1 Fan, where to find Calus every week for Hear, Don’t Heed, and have some fun with the Reaper’s Blade challenge in Nightmare Containment for the Reaper’s Blade challenge.

Shadow’s Return is the challenge that will take the longest, as it has multiple tasks and sub-tasks to pursue. To get a better understanding of how to complete this specific requirement so that you earn your Reaper title, I’ve broken it up into steps below.

On the Reaper title page, Shadow’s Return will task you with taking out dangerous Loyalist threats through the following triumphs:

This triumph requires a visit to the haunted alcove in the Pleasure Gardens on the Derelict Leviathan. For Sporest of Beasts, wait until you see flavor text about “a distant snore” and then jump into the garden platform at the back. Take out the sleeping war-beasts and Nightmare Cabal that spawn inside of here, and you’ll soon face off against the Incendior boss Carun the Beastmaster.

Now it’s time to take on Nightmare Breached, the second haunted alcove. This one can be found to the left of the entrance and requires a little bit of platforming to get to. When you see the message, “a sword and shield clash together,” you can head inside to fight against several Scorn. Make certain that you kill the Nightmares of Kra’lok, the Sword, and Ha’lok, the Shield, to get this triumph.

Next, you’re headed to the Royal Pools. The first haunted alcove can be found right at the back and leads to a room that contains Nightmare of Sy’ad, the Unending for the Ritual Under Shadow challenge.

To complete the Drainage triumph, go into the chamber where the Scorn usually spawn and in the corner you’ll find an egregore-covered chamber that leads to another haunted alcove. Battle the Cabal inside there and the Nightmare of Qalec, the Sniper. You’ll know he’s nearby when you see “a red dot passes over your Ghost” flavor text.

A Guardian is a Guardian, even in a Nightmare

This public event requires some patience to trigger, but when it starts, look for some Cabal captives in both the Pleasure Gardens and Royal Pools. In the Pleasure Gardens, take out Loyalist troops who have trapped allied Cabal and help them defeat Nightmare threats inside of that area. In the Royal Pools, look for a beacon to the left of the entrance amidst a nearby opulent chest, activate it, and assist the Cabal who’ll join you. There’ll be four challenges in this Triumph to work through.

For At the behest of the Empress, look for a Cabal artifact in the Royal Pools and activate it. After you see the message “Caital’s boarding party has been called” you’ll assist allied Cabal and take on two bosses named Jai’ek and Au’Gor.

Exile Ended can be started in the Pleasure Gardens, and you’ll want to look out for a Cabal Shield Warden Incendior who spawns inside of a shielded area. Defeat him and release the Cabal ally prisoner to get another triumph in your collection.

It’s time to start Battle Lines, so stay in the Pleasure Gardens. When you see the message “Loyalist Sentinels have fortified a position,” look for shielded areas and eliminate all Loyalist Cabal inside. Destroy the shield generators–three in total–and take out the Loyalist Cabal commander that appears.

Finally, it’s back to the Royal Pools for Shared Fears. A message that reads, “Three powerful Nightmares haunt the Leviathan,” will appear and Scorn by the name of the Sunken, Drowned, and Forgotten will spawn in. Quickly defeat all three, and then prepare for a boss fight against Ce’kik, Seeker of the Deep. With him out of the way, you’ll be another step closer to that Reaper title.

On the Derelict Leviathan, defeat the Nightmare of Ky’leks, the Docked, and Nightmare of Evoks, the Burned within the Royal Pools. These enemies spawn in randomly, so you’ll have to wait for them to appear.

Get to taking out their commanders, one by one

Like the roaming nightmares in the Pleasure Gardens, you’ll want to explore the Royal Pools to take out two threats who occasionally spawn in that location. Keep your eyes open for the Nightmare of Tlazet, Fed to Beasts, and the Nightmare of Uaoc, Spine Breaker.

With those major challenges tackled and completed, the rest of the season is a cakewalk. You can grab a daily round or two of Nightmare Containment to complete Harvester of Sorrows, equip Opulent weapons for the Malicious Haunt triumph, and enjoy a great story in the weekly Sever missions.

It’s worth noting that time is of the essence though, as Season of the Haunted ends in August. If you’re just seriously diving into the Reaper title chase, you can still get that seal with a decent amount of activity every day until the season ends.