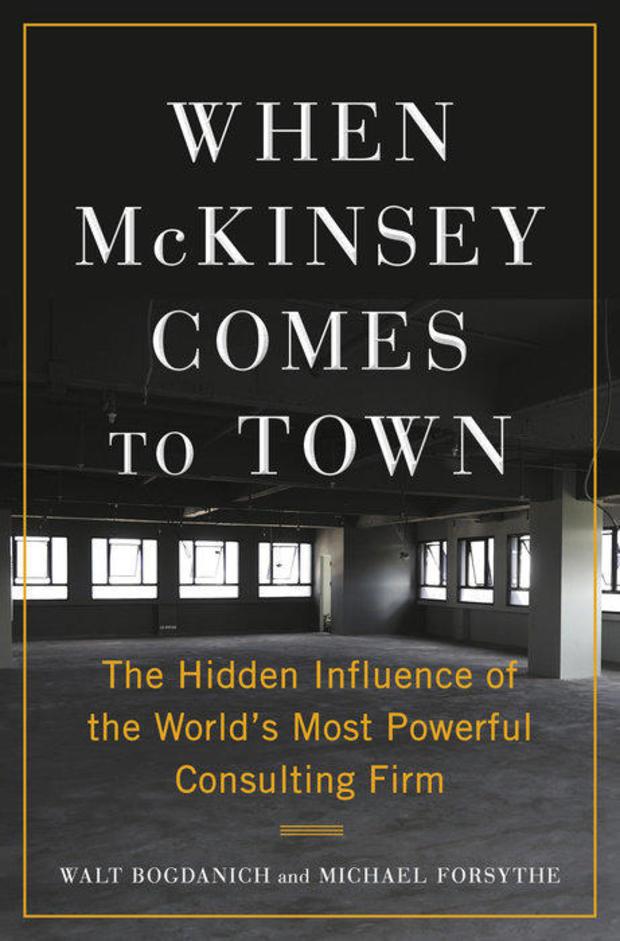 At top universities like Harvard, in Cambridge, Massachusetts, there’s a fall tradition playing out behind the scenes: students are back, and so are company recruiters looking to hire the best and the brightest.

These prize students, say New York Times investigative reporters Walt Bogdanich and Michael Forsythe, want a place to work as prestigious as the university that they attended.

And, according to Bogdanich and Forsythe, on top of many students’ lists is McKinsey & Company, a firm, Bogdanich said, that “gives advice. And people are willing to spend a lot of money for it.”

Their new book is “When McKinsey Comes to Town: The Hidden Influence of the World’s Most Powerful Consulting Firm” (Random House).

The authors say McKinsey has worked with nearly everyone, from Walt Disney to U.S. Steel; health care providers to tobacco companies; the State of Mississippi to the Kingdom of Saudi Arabia. McKinsey has even worked for CBS’ parent company in the past, Viacom.

“It’s so big and so powerful and so secret, and it influences the way we live,” Bogdanich said.

Which makes McKinsey, they say, a major force for spreading ideas globally – both good and bad.

Forsythe said, “In the ’90s and 2000s, a lot of people thought globalization just was the cat’s meow. And people were losing jobs all over America. And McKinsey was beating the drums on this. And they were even putting slides in a cigarette company’s presentation on how maybe they should think about offshoring as well: It worked for company B, why don’t you try it?”

Founded in 1926 by University of Chicago professor James O. McKinsey, the company has long been known as an efficiency expert.

Erik Edstrom is a West Point and Oxford grad; Garrison Lovely, a graduate of Cornell. Both worked at McKinsey.

“When you put gas in your car, McKinsey had something to do with that business,” said Edstrom. “When you go into a 7-Eleven to buy some soda, they touched that.”

Lovely said, “It’s a pretty safe bet that if you’ve heard of a company or a federal agency, that McKinsey is working for them or has worked for them.”

The two are among the dozens of current and former employees who talked to the book’s authors.

Moriarty asked, “You both signed NDAs. You’re really not supposed to be talking about this, right?”

“Well, I’m not talking about any specific clients,” said Edstrom. “In my going-away letter, in everything we have said today, I have never mentioned a client name.”

Before Lovely became disillusioned, he found the work thrilling: “As a 21-year-old, it’s hard to imagine having more of an impact on actual outcomes in the world than working at a consulting firm. Just being in the room and having a good idea and following through on it, you can actually end up having a lot of impact.

“The flip-side of that is that, if the organizations you’re supporting, the mission, is not actually doing good in the world, then those new initiatives and those new ideas can have a really bad effect.”

McKinsey sets itself apart from other consultants with a promise that recruits can change the world, and touts its work with fossil fuel companies to reduce their emissions. In a recruiting video, the company’s global managing partner Bob Sternfels says, “What if we could be the largest private sector catalyst for decarbonization in the world?”

That’s why Edstrom joined the company. But he was outraged to discover how important those same companies are to McKinsey’s bottom line.

“They serve a lot of clients with really harmful effects,” Edstrom said. “They know exactly what the repercussions are going to be, and then they say, ‘We’re gonna do it anyway.’ And that tells you all you need to know about the firm.”

Until recently, McKinsey largely avoided public scrutiny of its clients. But last year it paid a nearly $600 million settlement related to its work with opioid makers, including Purdue Pharma. McKinsey was accused of helping Purdue “turbocharge” its sales of the powerful painkiller OxyContin, after hundreds of thousands died of opioid overdoses across the country.

McKinsey apologized and said it stopped working for opioid manufacturers in 2019. It admitted no wrongdoing.

The disclosure of McKinsey’s work for Purdue set off alarm bells on Capitol Hill. At an April 2022 hearing of the Committee on Oversight and Reform, Chairwoman Carolyn Maloney said, “At the same time McKinsey was providing secret advice to Purdue to boost opioid sales, the firm was also consulting for the Food and Drug Administration.”

A House Oversight Committee majority interim report found that McKinsey had nearly two dozen consultants who had worked at both Purdue and the FDA.

But at a hearing earlier this year, the company’s Bob Sternfels denied any conflict of interest. He said, “McKinsey did not, did not, serve both the FDA and Purdue on opioid-related matters … Our work for the FDA focused on administrative and operational topics, including improvements to organization structure, business processes, and technology.”

California Congresswoman Katie Porter is not persuaded. Porter told Moriarty, “Streamline technology solutions, find efficiencies, operationalize – these are all mumbo-jumbo to hide the fact that McKinsey was making money off opioids at the same time they were helping the government figure out how to regulate them.”

At the April Oversight Committee hearing, Porter asked Sternfels, “If your work for FDA was so important, didn’t it have some influence on what they actually did in the world, with regard to drug manufacturers?”

“No, it didn’t, Congresswoman,” he replied.

McKinsey declined “Sunday Morning”‘s request for an on-camera interview, but in a statement to CBS News says there are strict policies in place to prevent the sharing of sensitive client information.

The firm isn’t currently working with the FDA.

Bogdanich said, “I think most Americans, when they hear that a consulting company is working for a drug company at the same time it’s working for their regulator, I think it’s just common sense that there’s a problem here.”

In their book, the authors also focus on McKinsey’s past work with Enron; Immigration and Customs Enforcement; as well as Chinese state-run companies.

Moriarty asked, “Could McKinsey take a look at this book and say, ‘You’re just cherry-picking the clients where things didn’t go quite as well,’ and that they’ve done so much good?”

Forsythe replied, “It’s more than just the bad apples. I think it’s structural. And when you have such smart, hard-working people working their hearts out for a client that’s a bad actor, that’s a real force for bad in the world.”

McKinsey, in its statement, says the book “fundamentally misrepresents our firm and our work,” and that last year the firm instituted a “new client selection policy more rigorous than any other in our industry.” It no longer represents tobacco companies. (See below.)

The negative attention, though, doesn’t seem to have had an impact on business. More than a million people applied for jobs at McKinsey last year; and the firm has collected almost a billion dollars from the federal government alone since 2006.

Bogdanich said, “Their reputation is such that a lot of people in powerful positions feel that they can’t go about their business without McKinsey at their side. And that’s why they hire ’em. That’s why they keep hiring ’em, in spite of a lot of the negative news that’s coming out about ’em. After all, they’re McKinsey.”

READ AN EXCERPT: “When McKinsey Comes to Town”

The following statement was provided to CBS News by McKinsey & Company:

We believe that business, when managed well and responsibly, is a force for good. Across virtually every metric, from life expectancy to income levels to educational attainment, business has spurred growth around the world, lifting more than a billion people out of poverty and driving innovations needed to confront challenges like pandemics and climate change. We have contributed to these successes through our work supporting thousands of clients each year.

A recently published book fundamentally misrepresents our firm and our work. The book also seeks to associate our firm with events—like the 2008 financial crisis, a Major League Baseball cheating scandal, or safety incidents at a theme park—that we simply had nothing to do with. Perhaps this is why the book contains more than a dozen disclaimers, across these and other issues, acknowledging that our work did not cause or was not associated with the trend or event for which the authors criticize us.

We stand by our record of helping clients accelerate sustainable and inclusive growth for their organizations and the world. In recent years, our clients contributed 20% of global GDP growth and 80% of reported reductions in CO2 emissions. We have helped clients scale up global ventilator production and deploy COVID-19 vaccines, decarbonize power generation, fund landmark investments in carbon removal technologies, and support refugees and rebuilding in Ukraine.

Despite the stereotype some have about consultants, McKinsey is typically hired to help our clients grow their businesses and expand their workforces: our clients add one million jobs per year, and we have upskilled or reskilled a million more individuals through our work and pro bono efforts. Indeed, we helped the authors’ own newspaper, The New York Times, develop the digital subscription model that has made it one of the most successful media companies.

When we have made mistakes, we acknowledged them and made changes. We apologized for our past work on opioids and were the first company to work with U.S. State Attorneys General to help communities affected by the crisis. More broadly, we have invested more than $600 million to upgrade our legal, risk, and compliance capabilities, and hired some of the world’s top experts to lead those teams. We now follow a global client selection policy more rigorous than any other in our industry.

It is telling but not surprising that in a nearly 300-page book, the authors devote few sentences to these extensive changes. Neither do they make clear to readers that virtually all the events they describe took place years and sometimes decades before our firm implemented its new client service policy and comprehensively upgraded our risk and governance teams and capabilities.

As we approach our firm’s second century, we aim to set the standard for accountability and compliance in our profession, and we welcome good-faith criticism or advice for how we can do better. We will not, however, let fear of criticism stop us from undertaking work that we believe makes a positive difference.

This means we will continue to work with clients in hard-to-abate industries like energy, shipping and agriculture, because society cannot deliver necessary carbon reductions without engaging with the industries that need to transition the most. We will keep working in the public sector, even when it brings scrutiny, because we believe our firm’s expertise helps our government clients deliver better outcomes for those who depend on them. And, because global challenges do not stop at borders—and addressing these challenges will require the best, global teams—we will continue to operate as a proudly global firm, including by responsibly serving clients in geographies where some have criticized our presence.

For nearly 100 years, our firm has worked hard to put other institutions’ success before our own. Though we are not perfect, we believe this mission is as important as ever. It is why our more than 40,000 people come to work every day to help our clients—and business at large—deliver lasting value for their shareholders, employees, customers, and communities around the world.