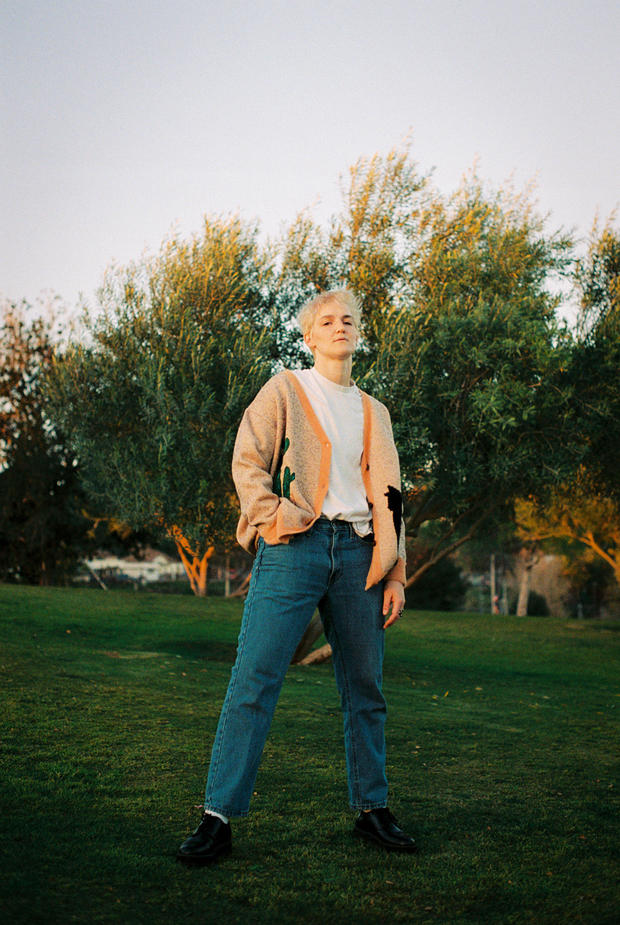 The musician, who spent her childhood growing up in a rectory, didn’t ever think she would write an entire album about her religious upbringing. But when the pandemic left her with nothing but time to focus on her music, the end result was an album Baldridge couldn’t have predicted.

“Preacher’s Kid” is a musical exploration about growing up in the Christian faith and how that life impacted how she embraced her queer identity. Recorded with her laptop and small microphone, she never expected the songs to go very far. But in February 2021, under her stage name Semler, the album hit No. 1 on the iTunes Christian Music charts, a first for an openly queer and firmly Christian artist.

“In my mind, I didn’t want to deal with [my relationship with religion] anymore,” she told CBS News. “But I actually think that there was a great deal of healing that I needed to do. And so I wrote the project to almost get it out of my system. And what I found was that it opened up new questions and new ideas and themes that I was so inspired by and gave me a community that I didn’t even know really existed before.”

Baldridge is just one example of how, rather than ignoring or turning away from their faith, some queer artists and creators are using their religous upbringings to inform their most rewarding work.

Nowhere is the relationship between God and gayness more apparent than on social media. With data showing a clear and current divide between the religious mainstream and the LGBTQ+ community, it could be easy for queer people who feel safe in their sexualities to reject their religious upbringings altogether.

In recent years, social media has been used as a helpful tool for members of the LGBTQ+ community to unpack and recontextualize their relationships with religion and the church and connect with others who are doing the same.

The hashtag #exvangelical has almost 873.1 million views on TikTok, with specific iterations each enjoying between 50,000 and 43 million additional views. In these videos, people explain why they left their churches, or talk through some of the religious experiences that had a lasting impact on their sense of self worth.

During the pandemic, Baldridge’s music became extremely popular in this community, a response she credits to the specificity of growing up torn over two worlds.

Asked why so many people relate to her music, she replied, “I think because it came from a place of brutal honesty and frustration. That’s always going to be relatable.”

“For so long, I was trying to be some version of myself, sliced-and-diced to fit. So I think that once I was able to be a whole person, and engage with myself as holy, that’s just the most honest form of expression. And in doing so, you find other people who can relate to it.”

Badridge admits that finding peace within a religion that didn’t accept her wasn’t as easy as finding an inner peace. In the United States, many discussions over LGBTQ+ rights, in public forums and the country’s courts, have been framed as battles between the queer community versus the religious one.

Within conservative strains of Christianity specifically, the practice of conversion therapy, based in the belief that gayness is a disease that can be cured, created its own trauma in the queer community. Even as the process continues to be publicly denounced by the American Medical and Psychological Associations as ineffective and harmful, as many as 700,000 adults in the United States have gone through a conversion program, CBS “Sunday Morning” reported in 2018.

Even further back, the emergence of the HIV-AIDS epidemic in the 1980s, which disproportionately affected the LGBTQ+ community, was seen by many religious people as a plague sent by God to condemn queerness as a sin.

Tony Award-winning playwright Michael R. Jackson told CBS News that growing up, he heard AIDS was sent as a punishment by God. While that wasn’t his only reason for leaving the church, Jackson said that continued rhetoric let him know he needed to find a new spiritual home.

His show “A Strange Loop,” which took home the Tony Award for Best Musical earlier this month, tells the story of Usher, a Broadway usher who is forced to grapple with his queerness, blackness, fatness and uber-religious parents.

“It’s talked about in this very flippant way, like, well, ‘He shouldn’t have been out there living that gay lifestyle,'” Jackson said, describing a scene where Usher pushes back against hurtful things he’s heard about queerness, showing his mother the repercussions of constant exposure to damnation. “All of these things accumulate and have an impact. And the church is often a scaffolding for the blunt force of that kind of rhetoric.”

A 2015 study published in the Archives of Suicide Research found that in LGBTQ+ teens and young adults between 18 and 24, parents’ religious belief on homosexuality were associated with almost double the risk of suicide or self harm.

Baldridge said that hearing about homosexuality in youth group, where it was often associated with shame, really “shut down” a piece of herself.

In 2018, a Trevor Project report found a direct link between what teens heard their parents say about religion and queerness and whether teens chose to come out to their parents regarding their orientation or gender identity. The report concluded that LGBTQ+ acceptance in religion could have an effect in preventing higher suicide rates in LGBTQ+ teens.

While affirming churches that support the existence of LGBTQ+ communities continue to emerge, countless others are etremely vocal in their belief that queerness is a sin and not what God intented. The result is an often tense relationship between a belief in God and same-sex relationships, a tension that queer youth continually bear the full brunt of.

Author Casey McQuiston said that this generation’s relationship with social media makes them far more optimistic about the prospects for queer teens and young adults to form better relationships with their identities and religions.

Their book, “I Kissed Shara Wheeler,” takes place in a small Christian school in the South, where her protagonist must reconcile her dislike of her small religious community with the joy and family it ends up bringing her.

“Information about queerness is so much more readily available online, so I am optimistic that these kids will be able to find spaces and information that will help counter the information they’re being fed at school, and will also help them feel less alone.” McQuiston told CBS News. And so hopefully, while they will obviously still have a lot of the same lasting baggage, I hope they’ll have more of a life raft than [people my age] did.”

When he accepted the 2022 Tony Award for Best Book of a Musical, Jackson called his musical a life raft he created to just get through the day as a “Black gay man.” He told CBS News that while the church wasn’t that space for him, his understanding of religion allowed him to find a new home in his theater community.

“I sort of ran screaming from the church, because it felt too confining due to a lot of the orthodoxy around how the church felt about homosexuality. And I really sort of decided that I needed a break from that, like, in a real way,” Jackson said. “But over the years of working in theater, I sort of feel like my new church or religion is in art, and in trying to bring many people together, to worship in music and in theater. And so that, for me, has given me the transcendent experience that I don’t think I’ve ever really fully got in church.”

Baldridge says that as much as it pains her to see kids and teens relating to how she was treated by the church, she also feels joy at seeing young people still hold space for a relationship with religion. Baldridge adds that she finds power in the way queer religious people have taken parts of their faith, like hope, radical love and reclamation, and made them apart of their own queer culture.

Even within the complexities and varied nature of their art, McQuiston, Jackson and Baldridge all said they created their work to contextualize their own lives. But the artists are all aware that the same work that brought them solace might just be what helps a queer kid love themselves and the world they came from — something they all welcome with open arms.

“I think being a queer person of faith means you’re always sort of tilted towards resilience and hope,” Baldridge said. “For a lot of queer people, reclamation is queer culture. So they’re able to reclaim the language, sometimes the music, the prayers, all the things that served us in this radical, unconditional, hopeful way, which I believe to be God. There’s no reason for us to ditch that just because other people say we don’t belong.”