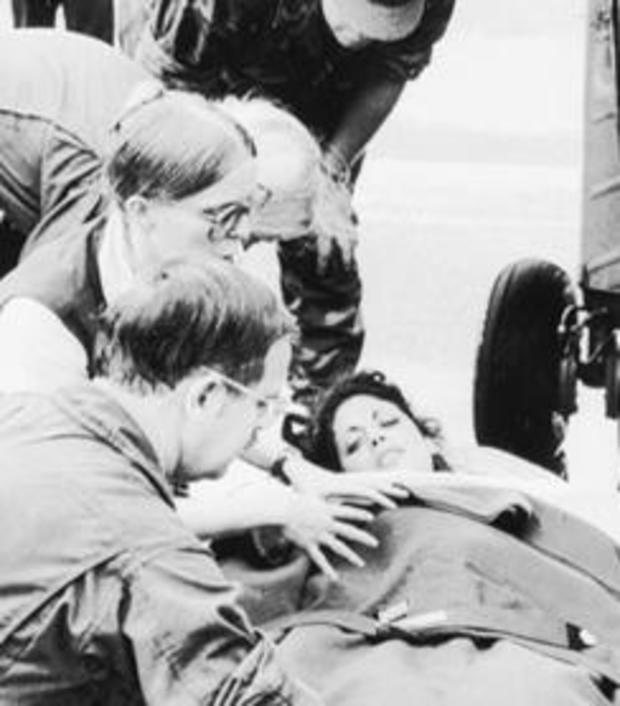 After spending over a decade in Congress, Rep. Jackie Speier, a California Democrat, will be retiring. She is one of 55 lawmakers who decided not to run for re-election.

But Speier’s road to Washington began in 1978 on a deserted airstrip in Guyana where she lay wounded after being shot five times.

Speier was then a 28-year-old congressional staffer on a fact-finding mission with her boss, California Rep. Leo Ryan, at the People’s Temple compound of cult leader Jim Jones.

After the visit, they sought to return home but attackers dispatched by the cult leaders assassinated Ryan and shot Speier multiple times.

For 22 hours, she lay on the ground bleeding and hurt — afraid that she would never see her family again.

“Many of us thought we were just going to die there. I was thinking that you know, no one would ever know. My family would never know what happened to me,” she said.

Speier would be air rescued and saved. The incident would lead to an act of mass suicide in Jonestown in which 918 people, including children, would die.

Speier said surviving the ambush has defined her life and given her the strength she needed to fight.

“It’s informed everything I’ve done. I mean, it’s made me into a fighter and to not take no for an answer,” she said.

Speier’s political career would fully take off shortly after the ambush and in 2008 she won Ryan’s old congressional seat.

Eric Ryan, a former staffer to Speier, said that her fighting spirit has helped her champion legislation including introducing the “I am Vanessa Guillén Act,” named for the Fort Hood soldier who had reported sexual harassment before she was murdered by a fellow soldier, and helping advocate for female congressional staffers who experienced sexual harassment on Capitol Hill.

“She sees something wrong and feels a compulsion and need to do something about it,” Ryan said.

Republicans have bristled at some of Speier’s other ideas and tactics. She used her maiden floor speech to call for the return of American troops from Iraq.

Speier was also one of the first representatives to advocate the use of the 25th Amendment to the U.S. Constitution to remove President Trump from office in 2017 after his response to the White nationalist rally in Charlottesville.

She has come a long way from facing death on that airstrip in Guyana. But she said surviving the incident gave her a second chance to live.

“Everyone looks at Guyana as this horrific — yes, it was horrific. But my God, I had a second chance at life. And it’s made me fearless, which I probably would not have been had I not had that experience. I mean, when you look death in the eye, you are not afraid anymore,” she said.

Speier said that after she leaves Capitol Hill, she plans to spend time with her family and remain full-time in California. Her final day in office is Jan. 2.