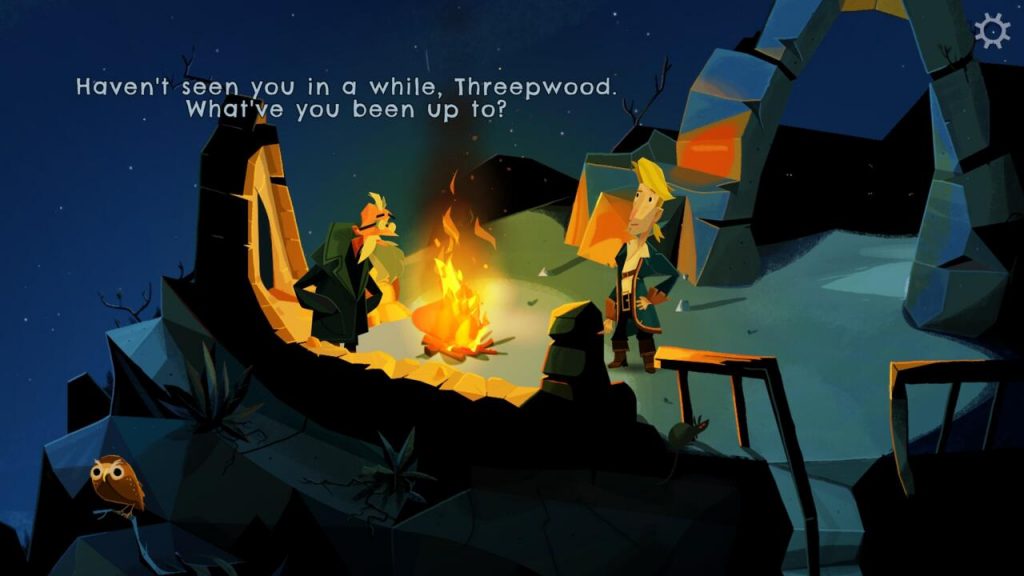 A palpable fondness for the first two Monkey Island games emanates throughout every three-headed monkey gag and bout of insult swordfighting in Return to Monkey Island. It’s the kind of love that trickles down from the top, as Guybrush Threepwood’s latest adventure sees series creator Ron Gilbert welcomed back into the fold for the first time since 1991’s Monkey Island 2: LeChuck’s Revenge. The self-described grumpy gamer helmed development on this unexpected sequel alongside veteran designer and writer Dave Grossman and the talented team at developer Terrible Toybox. With this in mind, it should come as no surprise that Return to Monkey Island is tinged with nostalgia and leans into this wistfulness with obvious joy. It’s also a thrilling sequel in its own right; one that sees the beloved series return in swashbuckling fashion by incorporating ideas both old and new.

Much like the earliest games in the series, Return to Monkey Island is a traditional 2D point-and-click adventure game built on storytelling and puzzle-solving. Hapless protagonist Guybrush Threepwood is back–older and only slightly wiser this time around. The intrepid pirate is also joined by plenty of returning characters, including his usual cohort Elaine Marley and zombie archnemesis, LeChuck. However, the most intriguing aspect of Return to Monkey Island is that it picks up right where LeChuck’s Revenge left off.

In returning to the series, Gilbert and Grossman wanted to use this opportunity to finally shed some light on that game’s cliffhanger ending, yet Return to Monkey Island isn’t exactly a direct sequel, either. For one, it still takes into account the events of each Monkey Island game released after 1991, with characters like Murray the demonic talking skull making an appearance. How it does this and the way it structures its narrative framework is fascinating, but delving into specifics would encroach on major spoiler territory. Instead, I’ll just say this unique approach adds a mysterious wrinkle to an otherwise simple tale, and the ending is no less provocative than the conclusion to LeChuck’s Revenge.

The main thrust of the narrative revolves around finally uncovering the secret of Monkey Island. Guybrush isn’t in a position to do so at the beginning of the game–being both shipless and crewless–so your first task is to find a way off the familiar Mêlée Island. This is easier said than done, and it doesn’t take long for the story to spiral in multiple directions as the twists and turns and double- and triple-crosses keep piling up. The writing and performances from its returning voice cast are top-notch throughout, with most of the jokes landing even if they’re not laugh-out-loud funny. Monkey Island’s signature brand of absurdist humor is fully intact, whether it’s riffing on past gags, touching on modern themes with its tongue firmly planted in its cheek, or showcasing a self-referential wit. There’s also an earnestness to the whole experience that can’t help but induce a permanent grin. For as much as nostalgia permeates its setting, characters, and music, it’s also keenly felt in the game’s heartwarming tone as it takes you on another goofy pirate adventure.

Seeing Guybrush stroll out onto Mêlée Island’s lookout point, with the campfire burning and the bearded Lookout purveying the island, transported me back to playing The Secret of Monkey Island for the first time. You can still visit the SCUMM Bar and hear a sales pitch for the 1990 adventure game Loom, pass under the massive clock in the town square that remains stuck on 10 PM, and chat with The Voodoo Lady in front of her bubbling cauldron. There have been a few changes since Guybrush last stepped foot on the island’s cobblestone streets, with a new, younger generation of pirates in charge and a couple of new proprietors taking up residence, but returning players will feel right at home, particularly as the soundtrack–arranged by returning composers from the series’ past–invokes familiar melodies that first burrowed into ears decades ago.

Newcomers won’t have this same immediate connection, but the series has always had a strong sense of place, and Return to Monkey Island is no different. Whether it’s the jaunty Caribbean-inspired music or the amount of detail etched into every scene, Monkey Island has always had a distinctive feel. Much of this has to do with the game’s evocative art style, which has been an unfortunate point of contention leading up to the game’s release. Each entry in the series has always introduced a new art style to keep things fresh and re-introduce the world with a visual reimagining, and Return to Monkey Island does this with aplomb. Everything, from its characters to backdrops to items, looks like it was pulled from a colorful storybook, with expressive caricatures and gorgeous close-ups bringing the world to life with an eye-catching aesthetic.

It’s a visual style that looks modern, and the same can be said of its gameplay, as well. The old SCUMM-based point-and-click interface of selecting different verb commands–such as “talk to” and “pick up”–has been replaced with a streamlined system that often gives you one or two context-sensitive options when interacting with an item or character. Bringing up your inventory lets you grab items and pull them into a scene, either to give them to someone, place them somewhere, or combine them with something. There’s also a handy to-do list located in your inventory so you can keep track of your goals. It’s all very intuitive and lets you focus on solving the myriad puzzles that Return to Monkey Island throws your way.

At the beginning of each playthrough, you’re given a choice of two difficulty modes: Casual, which makes puzzles simpler by removing some of the steps needed to solve them, and Hard, which features more and harder puzzles akin to the games of the ’90s. Whichever option you choose, Return to Monkey Island continues the series’ tradition of challenging you with creatively abstruse conundrums to solve. They’re rarely completely abstract, and there is a playful logic to most of the solutions. All of the puzzles are intertwined with the game’s storytelling, too, with many often triggering a chain reaction where solving something for one character will open up solutions for others. Figuring out how various items combine together and then using them to crack a brain teaser is inherently satisfying, although there are a couple of puzzles that disappointingly reuse the same solution, and later on there’s some back-and-forth travel between numerous locations that could’ve been handled more smoothly.

If you are struggling to figure out the answer to a specific puzzle, Return to Monkey Island introduces a magical hints book that you can turn to when completely stumped. Rather than pointing you to the correct answer straight away, you can ask this enchanted book questions to gradually receive hints that will help nudge you in the right direction. It sounds simple, but this system is rather ingenious. The game knows which puzzles you’ve already solved and what items are currently in your inventory, so each question and hint is tailored to your current circumstances. Using the hint system is also entirely optional, letting you ignore it entirely or lean on it only when you’re truly stuck.

Return to Monkey Island is a game for the series’ fans. There’s a scrapbook on the main menu that recounts the events of past games, but it’s light on specifics and feels more like a refresher course than a vital tool for newcomers to catch up on previous hijinks. Returning players will adore the fan service and familiar sense of warmth that permeates the whole experience, yet it still strives to make itself somewhat approachable for beginners. There’s no denying that certain elements will be lost without that decades-old connection, but having a history with the series isn’t essential to enjoy Guybrush Threepwood’s latest escapade. Return to Monkey Island tells a wholesome and compelling tale of swashbuckling shenanigans that should appeal to anyone seeking a hearty adventure on the high seas.