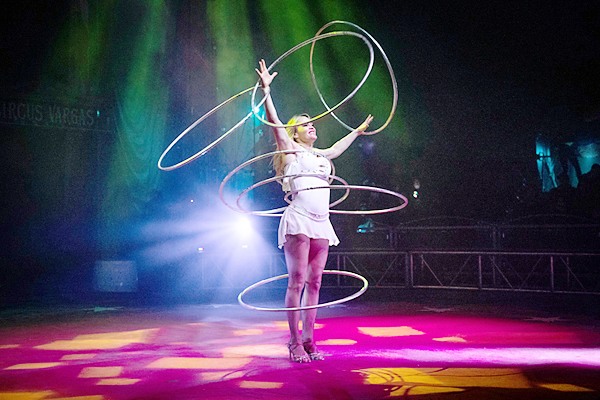 After all, it’s not every day you see the Marinella brothers walking (and more) on the outside of a giant hamster wheel 35 feet above the ground or contortionist Daniella Arata Quiroga shoot a bow and arrow with her feet.

In 2021, Circus Vargas was impressive, but this year’s production is even more amazing, from the trapeze artists to an ensemble of jugglers who showed the power of precise timing.

And the crowd last weekend was amazed to see not one, not two, but three motorcyclists riding quickly inside a spherical cage.

There was comedy as well, with a heroic rescue skit and a performer showing you can do a lot with a musical instrument.

Circus Vargas, which started its run Friday, will continue its performances through June 20 under its big tent at the Earl Warren Showgrounds, 3400 Calle Real, Santa Barbara.

There are no animals, but there are plenty of talented people who defy gravity and other laws of physics. Among the feats are a woman twirling many hula hoops.

This year’s theme is “The Circus Vargas Express,” which salutes the days when circuses typically traveled by train from town to town.

Once the theme is established, Circus Vargas presents a show of carefully choreographed dancing, feats and comedy to recorded music.

Last weekend, the audience was cheering, applauding and laughing during a show with impeccable pacing and imaginative performances.

The production features some classic circus moves, such as Romanian acrobats jumping onto one end of a teeter board, propelling the acrobat standing on the other end to jump into the air and the flip onto another acrobat standing on the shoulders of others. But there are also new variations on traditional circus acts, and you never know what to expect from moment to moment.

The circus is an international event, with performers from around the world. It’s also a show that reflects multiple generations of talent. The contortionist, Daniella Arata Quiroga, is the daughter of owners Nelson Quiroga and Katya Arata-Quiroga, the couple who bought Circus Vargas in the mid 2000s when Ms. Arata-Quiroga’s stepfather retired.

And the owners’ daughter, Mariella Arata Quiroga, is part of the circus as a trapeze artist. She’s part of a family tradition that has produced a show that is keeping its audience thoroughly entertained.