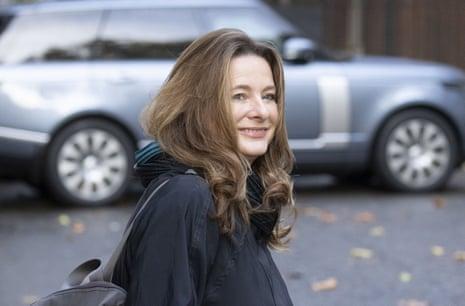 The government should not have announced a trade partnership with Egypt with the case of jailed British-Egyptian pro-democracy activist Alaa Abd El-Fattah unresolved, David Lammy, the shadow foreign secretary, said today.

I’m not sure in these circumstances we [Labour] would have launched a new strategic relationship with Egypt, which was announced in July this year.

The prime minister has effectively been dragged into this case because of Cop. That should not have been the case.

The secretary of state for foreign affairs only recently in the last few days made contact with the family despite me as MP raising this issue with successive foreign ministers.

I don’t think the government should be announcing a strategic relationship with Egypt this year when, in fact, this case is lingering and has gone on for months and months and months, and UK officials have not had access to check on his welfare. That is not acceptable.

Gillian Keegan, the education secretary, was batting for the government on the airwaves this morning. Her interviews were dominated by questions about Sir Gavin Williamson, and here are her key lines.

I think Rishi has the highest degree of integrity and judgment. We saw it all over the summer, he was prepared to tell the hard truths. That’s real leadership.

The reality is you appoint people and, you know, the only thing you can do if things don’t work out or things go wrong or things come to light afterwards is act quickly.

Gavin’s acted quickly, he’s removed the distraction. I would expect after today that it won’t be discussed any further.

I think it’s always sad when a colleague resigns. It does have an impact on them personally, it has an impact on their family. So, you know, nobody takes glee out of these situations at all.

But … it happens quite a lot in politics actually.

I’ve worked with him several times and I haven’t seen any of that. He’s never threatened me, or he’s only only ever been supportive actually, personally, to me.

North Northamptonshire council wants to prevent migrants being accommodated at the Royal Hotel in Kettering.

The authority applied to the high court for an emergency injunction and is considering its next steps after this was dismissed.

Council leader Jason Smithers said: “We do not feel that the Royal Hotel in Kettering is the appropriate place to accommodate asylum seekers for a number of reasons.

“We do not feel the proposals have been properly considered to ensure the best possible welfare can be provided to asylum seekers and the local communities in which they are housed.

“We are now considering our options in light of the injunction’s dismissal by the high court.”

When Sir Gavin Williamson was education secretary, he recorded a video for his department in which he said “bullying is never acceptable”. He said all schools should have anti-bullying policies in place.

The Liberal Democrats say the fact that Williamson could say this, when there is now considerable evidence that he himself bullied colleagues, shows the “rank hypocrisy” at the heart of government. Munira Wilson, the Lib Dem education spokesperson, said:

This exposes the rank hypocrisy and double standards at the heart of this Conservative government.

Gavin Williamson himself admitted that bullying is never acceptable.

Schools rightly have a zero tolerance approach to bullying. But once again it seems it’s one rule for Conservative ministers and another for everyone else.

Good morning. There are two big departures in the news at Westminster this morning: Sir Gavin Williamson has left the government, and Sir David Butler has departed life, at the age of 98. We will be focusing on Williamson, but Butler, who almost invented modern psephology, is the greater and more consequential figure. If you think about elections in terms of percentages, swings and demographics, and if you value the TV punditry of experts like Prof Sir John Curtice, you are inhabiting a mental framework that Butler did as much as anyone to create. More on him later.

But, first, Gavin Williamson. He may have gone, but the questions about the decision to appoint him in the first place haven’t, and this morning David Lammy rehearsed some of the lines we might here from Keir Starmer at PMQs. Lammy, the shadow foreign secretary, told the Today programme:

This raises real questions about the prime minister’s judgment. The behaviour [from Williamson] that we’ve heard about in the last few days is repellent, it’s odious, and it’s quite, quite unacceptable.

The prime minister knew much of this. It was reported to him. Why did he appoint Gavin Williamson to the government in the first place? Why did it even take 10 days to understand what Gavin Williamson would be doing?

He appointed him as some sort of enforcer, apparently because this is the way he behaves.

This is weak, it’s unacceptable, and we really should have an account of why why he came back into government.

When a scandal reaches the ‘raises questions about the PM’s judgment’ phase, that is a sign that it is beginning to go away. You don’t complain about “judgment” when you can complain about substance. But it is understandable why Labour does not want to let this go, and this attack line is valuable to the opposition because Rishi Sunak is unhappy having to defend the last 12 years of Tory government and would like the public to think he is leading a brand new government. But the Williamson appointment showed that he isn’t. Sunak’s cabinet is like an “edited highlights” of the Theresa May/Boris Johnson/Liz Truss administrations (with a bit of David Cameron thrown in), and, as a highly effective, backroom fixer and vote engineer, Williamson was someone who had made himself invaluable to Cameron, May and Johnson. And he performed a similar role with Sunak, which is why he got a job.

Here is our overnight story on Williamson’s resignation, by Pippa Crerar and Rowena Mason.

And here is the agenda for the day.

11am: MPs start voting in the ballot for a new chair for the Commons Treasury committee. The result will be announced in the afternoon.

I try to monitor the comments below the line (BTL) but it is impossible to read them all. If you have a direct question, do include “Andrew” in it somewhere and I’m more likely to find it. I do try to answer questions and, if they are of general interest, I will post the question and reply above the line (ATL), although I can’t promise to do this for everyone.

If you want to attract my attention quickly, it is probably better to use Twitter. I’m on @AndrewSparrow.

Alternatively, you can email me at andrew.sparrow@theguardian.com