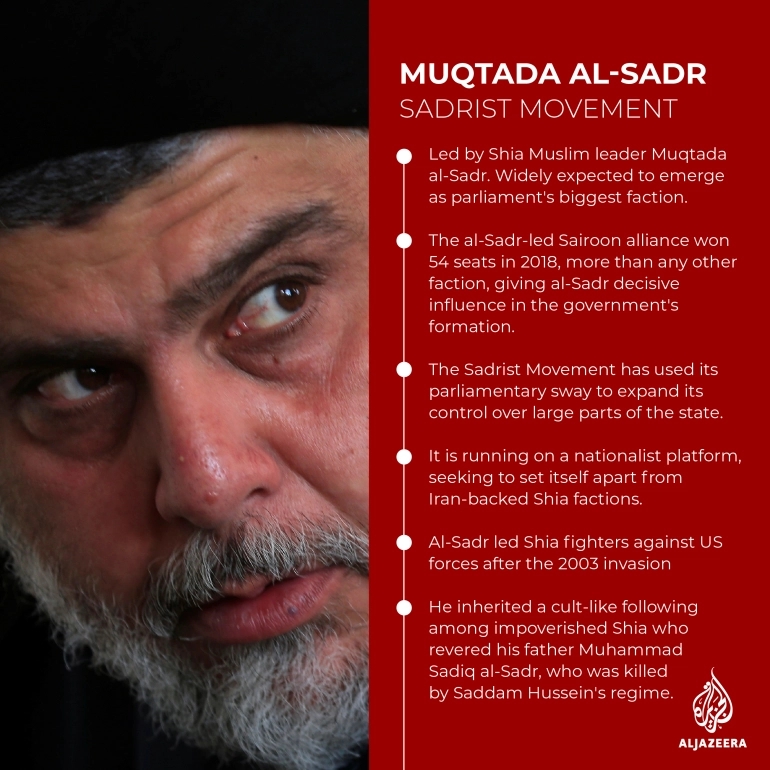 Rival Iraqi factions took to the streets of Baghdad to call for a new government with supporters of religious scholar Moqtada al-Sadr demanding early elections and his Iran-backed opponents saying the results of last October’s poll should be honoured.

Thousands of al-Sadr’s followers prayed outside parliament on Friday in a show of support for the populist leader who has called on the judiciary to dissolve parliament by the end of next week.

Hours later, supporters of Iran-backed groups opposed to al-Sadr rallied on the edge of the fortified Green Zone, where parliament and foreign embassies are located, insisting they should form the new government based on the October election.

Followers of al-Sadr stormed the parliament last month and have since been holding a sit-in outside the assembly building in the Iraqi capital.

The rivalry between the two sides shows the deep divisions within Iraq’s Shia community, which makes up about 60 percent of Iraq’s population of more than 40 million people. Unlike Iran-backed groups, al-Sadr wants better ties with Arab countries, including Sunni powerhouse Saudi Arabia, which is Iran’s main rival in the region.

Al-Sadr has also been a harsh critic of widespread corruption in the oil-rich country torn by decades of US-led war and subsequent violence, with a crumbling infrastructure, an impoverished majority, and a lack of basic services.

Al-Sadr, whose camp won the most votes in parliamentary elections last October, has not been able to form a majority government and after eight months of deadlock and jockeying with rival factions, he abandoned those attempts.

Members of al-Sadr’s parliamentary bloc resigned but instead of allowing his rivals — the Coordination Framework — to try and form a government, al-Sadr has demanded parliament be dissolved and early elections are held. It is unclear whether he has any legal basis for those demands.

Friday’s protest and counter-protest were the latest in a series of demonstrations that have raised fears of unrest if the political deadlock continues.

Religious and political leaders command the loyalty of huge numbers of people and militia groups operate independently from the central government. The impasse, now in its 10th month, is the longest in the country since the 2003 US-led invasion wreaked havoc on the political order.

“We are protesting against the occupation of parliament and those who threaten the judiciary,” said university student Abbas Salem who was part of the rally Friday by Iran-backed groups.

Salem carried a poster of a top Iranian general, Qassem Soleimani and a top Iraqi Shia militia leader, Abu Mahdi al-Muhandis, who were killed in a US drone raid in January 2020. He said he worries if al-Sadr forms a government, he will disband the Popular Mobilisation Forces, an umbrella of mostly Iran-backed Shia militias.

Another protester, Ahmad al-Maliki, 52, said they are opposed to al-Sadr followers’ “occupation of parliament” and added Iraq needs a new government as soon as possible.

Meanwhile, al-Sadr’s supporters in Baghdad and most Iraqi Shia-dominated provinces — except for the holy cities of Najaf and Karbala — held their own rallies and performed Friday prayers outdoors in a show of strength.

In Baghdad, most were dressed in black to mark the Muslim month of Muharram and some wore white capes symbolising burial shrouds and their willingness to die for their cause.

“You will not break Iraq as long as Sadr is here,” an imam told the crowd from a big red stage set up outside parliament. “There is no going back from this revolution … and the people will not give up their demands.”

In the intense summer heat, men picked their way through the worshippers and sprayed them with cold water. Some carried portraits of al-Sadr and his father, also a prominent Muslim scholar, as well as Iraqi flags.

Al-Sadr counts millions of Iraqis among his followers and has shown he can still stir up gatherings by hundreds of thousands of supporters, mostly working-class Shia Muslims, if he needs to exert political pressure.

Hamid Hussain, a father of five, said, “I am here to call for an early election and make sure that all the corrupt faces are excluded from the upcoming elections… I became unemployed because of the corrupt parties.”

As night fell, protesters supporting the pro-Iran groups started setting up tents to begin an open-ended sit-in until their demands are met.

“Today we will stage a sit-in …The people cannot handle another election … we are tired,” said Mohamed Yasin, 35, day labourer.