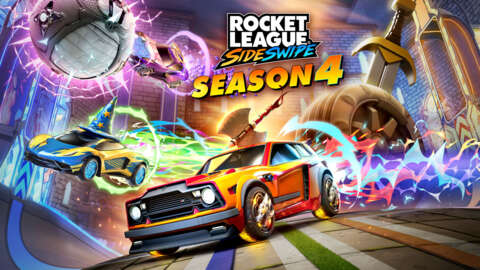 Psyonix, the developers of Rocket League Sideswipe, have announced that Season 4 is now live. The new season will introduce the Mutator Madness game mode, a Rocket League crossover event, a new arena, and a new Rocket Pass.

Madness is a new causal mode that changes the rules of a match through random mutators. When each game is finished, players will vote on if they enjoyed the mutator they received, and based on the votes, the possible set of mutators will be removed until there’s a winning combination selected on Friday. Whichever mutator setting wins will be playable throughout the weekend with a double XP boost.

In addition to the crossover event, there is also a new area: Eggscalibur. Season 3 rewards, such as avatars and titles, will also be given out during Season 4 for players who achieved the highest rank during the season. New daily challenges will be introduced alongside the return of Ranked 2v2 Hoop and a new Rocket Pass.

Rocket League Sideswipe is a free-to-play mobile game. You can download it on the Google Play Store and Apple App Store.