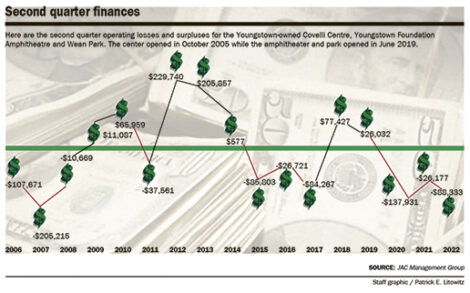 YOUNGSTOWN — The city-owned Covelli Centre, Youngstown Foundation Amphitheatre and Wean Park had a rough second quarter with an $88,333 operating loss.

The entertainment facilities have done worse only three other times between the months of April and June: in 2020 at the start of the COVID-19 pandemic and in 2006 and 2007, the first two second quarters ever for the center and several years before the amphitheater and park opened.

It could have been worse as the quarter was initially budgeted to lose $181,916, said Eric Ryan, president of JAC Management Group, which operates the center, amphitheater and park for the city.

“We didn’t have a lot of events,” he said. “We kept expenses down. We did much better than expected for the quarter.”

The second quarter has historically been the most inconsistent for the center, which opened in October 2005. The amphitheater and park opened in 2019. In the 17 second quarters, 10 of them had operational losses and seven had surpluses.

Ryan also said there was a “seasonal dip in events” in the most recent second quarter and $40,000 in additional expenses to rent a temporary ice plant, which makes and freezes the ice at the center, when the existing one broke down.

A show by comedian Katt Williams at the center attracted about 5,000 people, which was the best-attended event during the quarter, Ryan said. Overall, there were 21 events at the complex in the second quarter.

Because of an operating surplus during the first three months of the year, the facilities had a modest $4,397 profit as of June 30. The budget had called for a $131,542 deficit for the first six months.

The facilities also generated $80,108 for the city from a 5.5 percent admission tax on tickets during the second quarter. For the first six months of the year, the admission tax has brought in $123,130 to the city.

“They did better than what they budgeted,” city Finance Director Kyle Miasek said. “All the money will be made in the third and fourth quarters.”

Ryan said he expects to at least reach the budgeted operating surplus of $239,045 for the second half of this year.

The July 16 Luke Bryan concert at Wean Park was a huge success “that carried the third quarter in a lot of ways,” Ryan said. “It will certainly help the admission tax. It will be significant. We have a few other shows that are doing very well. We’re going to have a good third quarter and a good fourth quarter.”

September looks to be a successful month, Ryan said, with a number of concerts scheduled, including Lee Brice, Lamb of God and Ghost.

He said there are two “big shows” planned for the fourth quarter that haven’t yet been announced.

The city-owned facilities had a $19,525 operating surplus in 2021 as events, besides Youngstown Phantoms hockey games, didn’t return until June of that year.

Its operating surplus in 2020 was $10,915 with nothing but Phantoms games held at the center after mid-March of that year.

Both years were largely propped up by federal grant programs to help closed arenas impacted by the COVID-19 pandemic.

The city borrowed $11.9 million in 2005 to pay its portion of building the $45 million center. Most of the funding came from two federal grants.

Youngstown in June paid $1.7 million toward the principal — the largest such payment ever.

The city owes $3.4 million toward the principal with plans to evenly split that amount over payments in 2023 and 2024 to wipe out the debt.

The city paid only interest until its first principal payment in 2011.

Youngstown also borrowed $4 million in 2018 from the U.S. Department of Housing and Urban Development to pay for the $8 million amphitheater, which opened a year later.The rest of the money came from naming-rights deals.

The city is repaying that loan over 20 years.


Today’s breaking news and more in your inbox