There are 10 statewide primary elections taking place in California on Tuesday but all eyes will be on San Francisco as voters there will be deciding whether to recall District Attorney Chesa Boudin, one of the country’s most progressive top prosecutors.

Supporters of the recall have raised over $7 million and outspent Boudin 2-1 on a high-profile campaign that could have implications for reform-minded DAs in other parts of the country. Proponents claim Boudin — a longtime public defender — isn’t prosecuting criminals aggressively and say his approach to executing progressive policies is putting the safety of residents at risk.

The few polls on the recall race suggest Boudin is in trouble and could lose his seat. But his team maintains this is a Republican-led effort that wouldn’t have been on the ballot without contributions from wealthy political donors and Republican billionaire William Oberndorf.

If the recall effort is successful, then San Francisco Mayor London Breed will reappoint a replacement until the election in November. The person elected in November will hold the position until the end of the term in November 2023.

“I agree with the spirit of some of the policies that he’s implemented, but where Chesa has failed is by removing prosecutorial discretion completely,” said Brooke Jenkins, a former homicide prosecutor who left the DA’s office in October and joined the recall movement. “We need somebody who can institute reform in a manner that is safe and effective so that everywhere else around the country sees us and says ‘yeah, actually it’s working here, let’s try it.'”

Jenkins, one of more than 30 prosecutors to resign since Boudin took office in January 2020, told CBS News the rest of the country is looking to San Francisco as a model in criminal justice reform. She added that  “if it looks like lawlessness” and “victims not having a voice in the courtroom” then voters elsewhere “will reject anyone who tries to run on a platform of reform.”

Boudin’s supporters vehemently push back against that assertion. They say progressive reform prosecutors are unfairly being cast as scapegoats while crimes have increased in all parts of the country.

According to the annual Uniform Crime Report from the FBI, the number of homicides across the U.S. increased by 30% in 2020. In California, violent crimes occur at higher rates in Republican-voting counties, according to a 2021 analysis from the nonpartisan Center on Juvenile and Criminal Justice. A more recent study from the same organization found that violent crime rates in Sacramento, where the DA has adopted a more traditional “tough-on-crime” approach, is higher compared to San Francisco.

“But only progressive prosecutors are made to answer for crime rates,” San Francisco assistant district attorney and Boudin’s communications director Rachel Marshall wrote in a recent op-ed. “I have yet to learn of a traditional prosecutor attacked for crime increases,” she added.

Boudin came into office before calls to defund the police and reform the criminal justice system echoed across the country. In March 2020, he was one of many officials nationwide pushing for the release of people from jails and prisons to help limit the spread of COVID-19 and pursued charges of homicide against on-duty police officers.

“These policies have seen tremendous support, particularly in the last three or four years and because of that, there are powerful interests who are opposed to them,” Julie Edwards, a spokesperson for the campaign supporting Boudin, told CBS News. “They are trying this recall mechanism because they can’t win in a head-to-head fight.”

Boudin’s supporters say the recall effort in San Francisco is a warning and a threat to progressive DAs in other parts of the country who are disrupting the status quo and pushing for criminal justice reform.

“This is a sign of the vigorousness of the criminal justice reform movement that the conservative status quo people have to try to essentially rig the game through recalls to accomplish their goals,” Edwards said.

The push to recall Boudin was first launched in January 2021 by Republican commentator and former mayoral candidate Richie Greenberg. A separate campaign organized by Mary Jung, former chair of the San Francisco Democratic Party, started in April and sought to distance itself from the Republican campaign.

Greenberg’s petition didn’t get enough signatures but the campaign led by Jung and Jenkins garnered enough support to put the recall question – also known as Proposition H – on the ballot.

Momentum to recall Boudin picked up steam throughout 2021 as hate crimes against Asian Americans in San Francisco increased dramatically and victims blamed Boudin for siding with criminals. Recall supporters also point to car break ins and viral smash-and-grab robberies at major retail stores, claiming it is becoming a common occurrence on the streets of San Francisco as consequences of Boudin’s policies.

Data from the San Francisco Police Department shows robberies, burglaries, and car thefts were all down in 2021 compared to 2020. Homicides in the city increased from 48 to 56 while larceny theft jumped up more than 24%.

Edwards argued there is no “correlation” to spikes in some crimes and Boudin’s policies. “But if you take that to be true, then it makes to no sense to go after Chesa Boudin because San Francisco does not have anywhere near as high a crime rate as many other parts of the state and has had much smaller increase in crime compared to parts of the state with traditional or Republican District Attorneys.”

Supporters of the recall point out that more than 80,000 voters in San Francisco signed the petition to recall Boudin and that 83% of their donors are registered Democrats or Independents.

In Los Angeles, organizers are now close to gathering enough signatures to force a recall vote for their district attorney George Gascon. Gascon, who was elected in 2020, previously served as DA in San Francisco. His resignation and subsequent move to Southern California paved the way for Boudin to take office.

Breed has not officially weighed in on the DA recall. In October 2019, Breed appointed Susie Loftus, the former president of the San Francisco Police Commission, as the interim DA following Gascon’s resignation.

During that November’s election, Boudin got 36% of the support in the initial count but San Francisco’s ranked-choice voting system propelled him to victory over Loftus by less than 3,000 votes.

Last month, District Two Supervisor Catherine Stefani became the first elected official in the city to endorse the recall. Multiple political operatives involved with the recall effort told CBS News that Stefani would likely be considered by Breed as a potential replacement.

CBS News reporter covering the intersection between politics and tech. 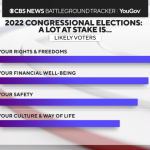 Grounded Review – Mountains Out Of Molehills