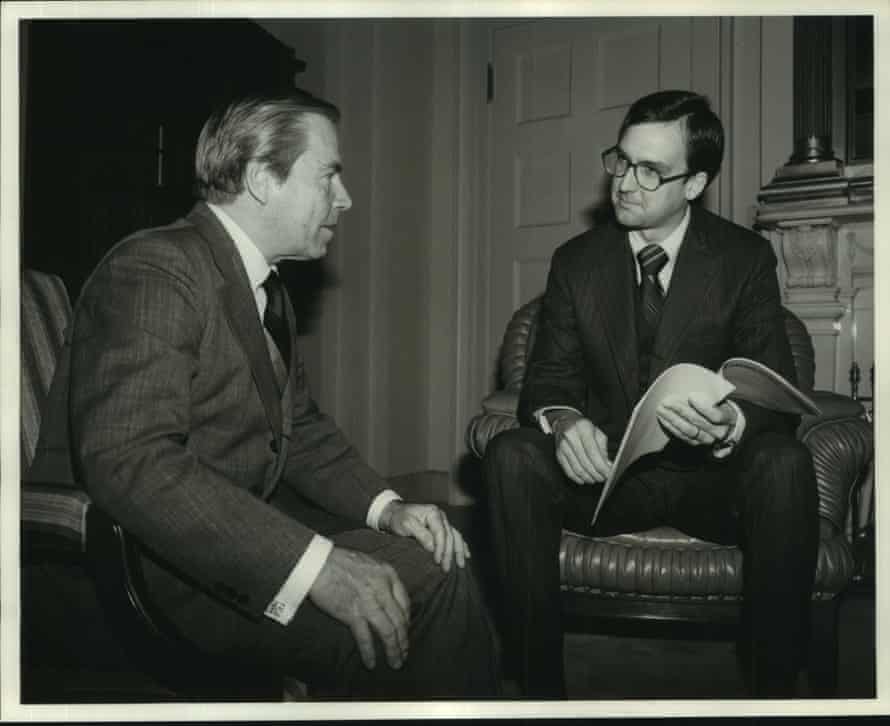 LGBTQ+ people have always existed, although they have largely been erased from historical narratives and even forced to participate in their own erasure. This is true of American politics, where the 20th century saw numerous gay and lesbian individuals participating at the highest levels of power, yet almost wholly effaced from the telling of our nation’s history. In the new book Secret City, historian James Kirchick attempts to inscribe into the historical record the homosexual men and women who have served and contributed to their country in Washington DC, throughout the 20th century.

“I want to intertwine these two threads – the mainstream thread of history that we all read about, and this gay history that’s been sidelined and sequestered,” he said. “I wanted to bring them together to show they’re connected stories, that they interact and complement each other. It’s not overturning this established narrative, it’s adding to it and complicating it.”

Kirchick first became intrigued by the idea of a gay history of American power politics in 2007, when he moved to DC and realized that it was suffused with a vivid gay cultural life and history. In fact, census data shows that DC has the highest proportion of gay people anywhere in the US. As he began working on the massive project, Kirchick started to believe that, as a gay man, he was uniquely equipped to write Secret City. “It needed a gay person to do this,” he said. “Even liberal straight historians would feel uncomfortable about writing this kind of a book. It’s important that we have these stories. My being gay informs my ability to say that.”

Starting with the administration of Franklin Delano Roosevelt, and continuing up through Bill Clinton’s presidency, Kirchick has spent a decade uncovering long-hidden stories that have been lost from history. At 800 pages, including well over 100 just for notes and sources, the scope of Secret City feels momentous. Although Kirchick found that writing the book could be overwhelming as he worked to piece together all of the information he discovered, and while at times he became angry at the historical wrongs he found, his dominant emotion while working on the project was gratitude. “I feel enormous gratitude for the people who came before. For the people who went through this suffering so I wouldn’t have to.”

Kirchick astutely points out that the fear of homosexuality has been a driver of presidential politics, functioning similarly to other historically recognized forms of prejudice like antisemitism and purges of so-called communists. This prejudice got kickstarted with the revelations of the Kinsey Reports in 1948 and 1953, when people suddenly realized that the gay population was far larger than anyone had guessed. Even more frightening, they could be anyone. This fear of “the gay next door” fueled stereotypes of gays being disloyal to the United States, as well as the belief that they were inherently conspiratorial – “if you have three homosexuals in the room, it’s automatically a conspiracy,” said Kirchick.

A good example of this point is the bizarre story of Bob Livingston. Best-known for being forced to resign amid a sex scandal while on the brink of succeeding Newt Gingrich as Speaker of the House during the impeachment of Bill Clinton, Livingston in 1980 became convinced that the gay men legitimately working for Ronald Reagan were in fact a sinister cabal secretly controlling him. Kirchick entwines this lurid tale, which fueled an effort to scuttle Reagan’s 1980 presidential nomination, with a number of gay conspiracy theories attached to the Reagan administration (including one that Reagan himself had sex with another man). Although these allegations are absurd excess based on little more than rumor, Kirchick argues that they had the potential to have turned Jimmy Carter’s landslide loss in the 1980 election to a win.

Regardless of all the intrigue, Kirchick also reports that Reagan’s administration proved to be “the gayest of any presidential administration yet”, demonstrating two points central to Secret City: the growing acceptance of gays throughout the 20th century and their great value in government, even a macho, hard-right one like Reagan’s. It is an irony common to stories of LGBTQ+ resilience that the very things that oppressed gay and lesbian individuals – such as the need to lead a double-life, or the isolation that came from not being permitted to marry – were made advantageous both to the pursuit of their liberation and their political careers. “In the period documented in this book,” Kirchick said, “closets were good at producing gay people with skills that made them preternaturally equipped to function in Washington – they were good at keeping secrets, had no family life to distract them, and they were more loyal to people in power. This is the perverse set of skills that the closet could breed.”

Throughout Secret City, Kirchick does a masterful job of conveying the flavor of homophobia in each historical era, while using impeccable research to vividly characterize the dozens of various individuals at play in these stories. This is a book not just about how political power was brought to bear on the lives of gay men and women; even more, it conveys the texture of an ever-evolving world that constantly kept gay people in check. It shows how social forces shaped gay lives through constant implicit and explicit threats, the very language that homosexuals had to describe their identity and experience, and stern control over the ways they could access the sexual practices that were made so central to their identity as human beings.

Because of this rich attention to detail, Secret City also offers a vivid chronicle of the waves of liberation and backlash that characterized the growing acceptance of LGBTQ+ rights in the 20th century. As Kirchick shows, the second world war became a national coming out of sorts, with gay people meeting in the armed forces in unprecedented numbers. This was followed by a wave of repression in the 1950s, then liberation in the sex-positive ’60s, followed by more repression in the eras of Nixon and Reagan, followed by more freedom during the Bill Clinton presidency. Across the sweep of Secret City, we see homosexuality transform from an absolute career-ender to something politicians can be carefully open about.

These waves continue today in Republican efforts to slander LGBTQ+ people as “groomers” and erase the gains trans people have made in access to medical care and social inclusion. Although Kirchick is well aware of the ugly politics of the present, as well as the fragility of the gains LGBTQ+ people have made in society, he ends Secret City on a note of triumph, celebrating the transformative acceptance of gay people as a “massive accomplishment of the liberal society”, and a quintessentially American success story. “I can point to a Gallup poll that self-reported LGBT people have doubled,” Kirchick said. “And obviously there’s been this explosion in visibility. I can’t predict the future, you can never say never. But in my limited experience I’m fairly sure that there’s never been a better time to be gay in this country.”

Spam email from politicians is coming to Gmail. Here’s how to fight it.