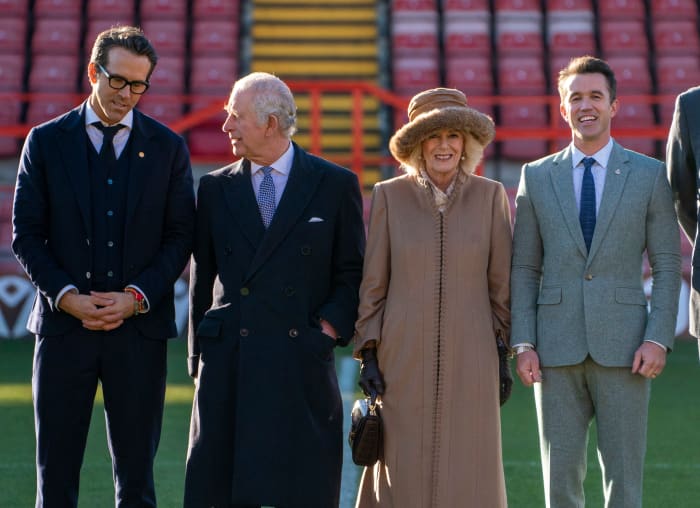 The king of comedy met the King of England.

During a recent visit to Wrexham, North Wales on Friday, King Charles met Ryan Reynolds, where they shook hands, shared some laughs, and posed for a few photos.

The royals were on hand to learn more about the redevelopment of the soccer club, which Reynolds and McElhenney purchased in 2021. The purchase of one of the oldest professional football clubs is chronicled in their docuseries, Welcome to Wrexham, which was recently greenlit for a second season on Disney+.

Per People, the royal couple were personally escorted onto the pitch by the Spirited actor and the Always Sunny in Philadelphia star.

He added: “Rob and I both said early on, and this holds true and for the rest of our lives, we will do anything to uplift and elevate this community and this club and having the King pay a visit is certainly one way to do it. That’s for sure. Very excited.”

In fact, Reynolds and McElhenney joked they had etiquette lessons before the visit.

King Charles and Queen Camilla then met with the First, Women’s and Youth Teams based at Wrexham, where he was overheard wishing them good luck on their upcoming match.

The royal outing comes on the heels of Prince Harry and Meghan Markle’s tell-all docuseries, Harry and Meghan, on Netflix. The second half is set to premiere on Dec. 15.

Meanwhile, Reynolds was just honored with the People’s Choice Icon Award on Sunday night before seemingly flying to the U.K. He thanked his wife, Blake Lively, who is pregnant with their fourth child, in the speech, and got a sweet shoutout from Shania Twain, who performed a medley of her greatest hits while accepting her Music Icon Award.