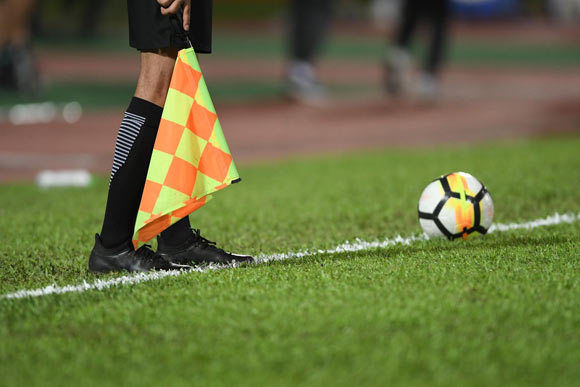 New research suggests that Video Assistant Referee (VAR) technology in soccer is useful for preventing obvious mistakes but is not precise enough to give accurate judgements every time.

An assistant referee with a flag. Image credit: Chiraphat Phaungmala.

VAR was introduced into soccer in 2018 to help referees review decisions for goals, red cards, penalties and offsides.

The technology uses film footage from pitch-side cameras, meaning that VAR operators can view the action from different angles and then offer their judgements on incidents to the head referee to make a final decision.

However, the accuracy and application of VAR has also been questioned by some experts.

Critics argue that VAR hampers the flow of the game, however some research suggests it has reduced the number of fouls, offsides and yellow cards.

“VAR is really useful in helping referees make accurate decisions, but this study has shown it has definite limitations,” said University of Bath researcher Pooya Soltani.

He filmed a player receiving the ball from a teammate, viewed from different camera angles, whilst recording the 3D positions of the ball and players using optical motion capture cameras.

Participants viewing the clips were asked to determine the exact moment of the kick and judge whether the ball receiver was in offside.

The researcher found that, on average, the participants thought the ball was kicked 132 milliseconds later it actually was, as measured by the optical motion cameras.

He also found that participants were more accurate in their judgements when the action was viewed at 0 and 90° angles, and when VAR guiding lines were present.

“The frame-rate and resolution of the cameras used in VAR sometimes does not keep pace with the fast movements, meaning that sometimes the player or the ball is blurred,” Dr. Soltani said.

“So, the viewer has to use their own judgement to extrapolate where the players were at the moment the ball was kicked, which affects whether it is offside or not.”

“We found that the ball was kicked 132 milliseconds earlier than the participants perceived, which doesn’t sound like much, but in a fast-paced game it could be long enough for the players to be in a different location and therefore could potentially change the outcomes of offside.”

“This goes to show that whilst VAR is useful to spot obvious errors, it shouldn’t be relied upon completely to make referee decisions.”

The study suggests that the accuracy of VAR could be improved by using higher frame-rate cameras that would record the movement of the ball in slower motion.

Also, for marginal offside decisions, thicker guiding lines in the VAR could be used to represent the uncertainty zone.

The accuracy could also be improved by viewing the gameplay from multiple angles.

“Whether right or wrong, I think the referee’s final decision adds flavor to the game.”

Dr. Soltani presented the results today at the 40th Conference of the International Society of Biomechanics in Sports (ISBS 2022).