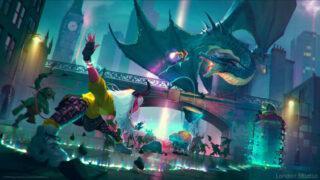 “We are proud of the history and innovation that we’ve done over the years, supporting all sorts of PlayStation technology, whether that’s virtual reality, or augmented reality, or microphones, or whatever,” said London Studio co-studio head Stuart Whyte.

“With this project, we really wanted to explore some new avenues and set ourselves some new challenges. We definitely wanted to try something a little bit different, and I think this new project really channels our ‘brave’ value and allows us to push ourselves on the ‘curious’ front, too. It’s an exciting future, it really is.

“Innovation is always going to be at the heart of what we do. If you look at our heritage and the titles we’ve done, there are a lot of firsts in there. And that will continue.”

“We’re going to take all of that innovation DNA and apply that into this online co-op combat game,” Saunders said.

“[In our concept art] you’re seeing a take on a modern fantasy London. Our overarching theme is about bringing fantastical and magical elements and intersecting that with familiar worlds, and you don’t get much more familiar to us than London.”

According to Whyte, London Studio came up with “a load of ideas” over several months, then refined them down until there were only a few left. From there, it spoke to several other PlayStation studios, as well as amongst each other at the studio about which project it was most passionate about.

“This concept scored super highly in all of those areas,” Whyte said. “We polled hundreds of gamers in the UK and US, through an anonymous poll, with some of the shortlisted ideas… This was the one that came up top.”

The game is being built on London Studio’s in-house Soho Engine, which was built to take full advantage of PlayStation 5.

“Our Soho Engine, our in-house game engine, is at the heart of what we’re doing here,” Whyte said. “This is an engine that was built from the ground-up for this generation of hardware and the needs of the game that we’re making. It’s designed to take full advantage of the PlayStation 5. But it’s fair to say that some of the toolset that we’re using dates back to the VR Worlds and Blood & Truth tech that we had on PlayStation 4. Because at the end of the day, virtual reality games need to have super-efficient pipelines and engines.”