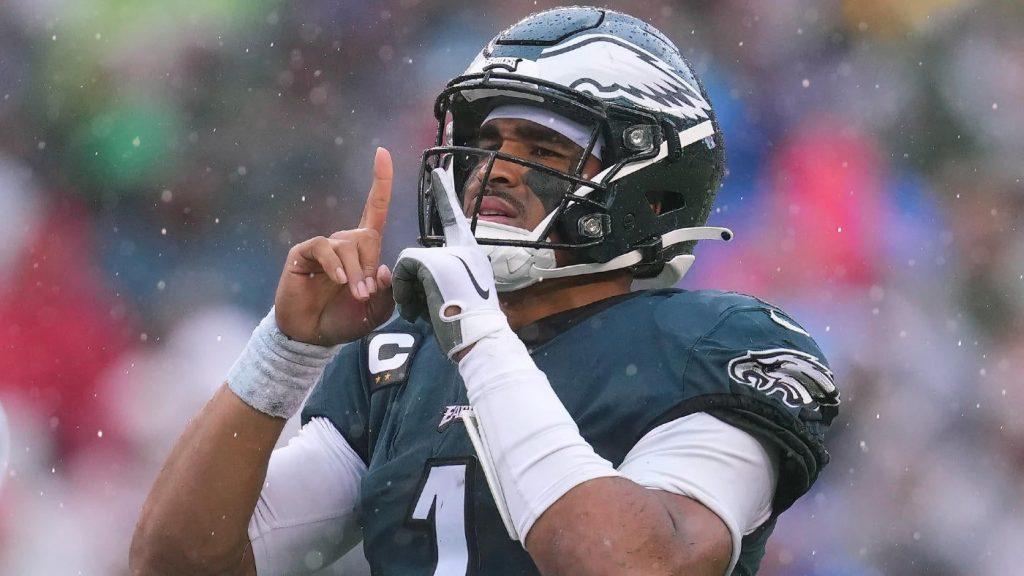 We are just over 20 percent through the 2022 NFL regular season, can you believe it? While digesting four weeks of football, we have learned a lot: Cooper Rush has looked like a franchise quarterback, Mitch Trubisky has not and the New York Giants are a lock for the playoffs. Maybe not, but the Giants’ 3-1 start is pretty impressive!

The Giants are not the only team that got off to a hot start this season, and after four weeks, we feel comfortable enough to try to separate the contenders from the pretenders. There are eight teams with a 3-1 record or better entering Week 5. Which ones have the wherewithal to go all the way? Let’s take a look.

The Eagles have the No. 2 offense in the league, as they average 435.5 yards per game. Don’t be surprised if they end the regular season No. 1. Jalen Hurts is a dynamic, dual-threat quarterback who is playing his best football, Miles Sanders is en route to a career year, averaging 89 rushing yards and about one rushing touchdown per game, and the A.J. Brown trade has worked out, as he’s caught 25 passes for 404 yards. He ranks third in the NFL in receiving yards through four games. The offense has been the obvious headline when it comes to the Eagles, but I think we should keep tabs on this defense.

The Eagles are the first team since the 2019 New England Patriots to not trail in the second half through four games. Philly has the No. 3 defense in terms of total yards allowed per game (277.3), and this unit possesses several studs. The additions of Haason Reddick and James Bradberry have paid immediate dividends, and then linebacker T.J. Edwards deserves credit for the jump he’s made as well. To me, it’s this Eagles defense that can serve as the backbone for this team as they progress through the regular season. The Eagles are legitimate contenders, and it helps that the NFC doesn’t look too strong right now.

The Bills were the odds-on favorite to win the Super Bowl before the start of the season, and they have certainly looked the part through four weeks. Buffalo has the No. 1 overall defense, and allows an average of just 14.5 points per game — which ranks second in the NFL behind the San Francisco 49ers. The Bills also have the No. 3 overall offense, and the No. 2 passing attack in the NFL behind the Los Angeles Chargers.

Since the start of last season (including playoffs), the Bills are 1-7 in games decided by one score. They showed last week that they can gut out tough victories in harsh environments, however, as Jordan Poyer picked off Lamar Jackson in the end zone late in the fourth quarter, setting up what was a game-winning drive against the Baltimore Ravens.

This seems like a good time to buy stock in the Bills, since they soon will return several players to the secondary. No. 1 cornerback Tre’Davious White is on the way back from injury, Dane Jackson is expected to be fully recovered from the scary neck injury he suffered in Week 2 and rookie Christian Benford will return at some point as well after undergoing hand surgery.

I’m sure everyone will agree, the Bills are contenders.

The revamped AFC West does not appear to be as talented as we thought it would be, and that benefits the Chiefs. The Las Vegas Raiders had a tough time finding that first win, the Denver Broncos have been a major disappointment and the Chargers have started to fall apart due to injuries. That could set Kansas City up to win the division for the seventh-straight season. Star quarterback Patrick Mahomes is 22-3 in his career in division games. That’s the best record by any quarterback since 2000 (minimum of 10 games).

The Chiefs have a top-five offense, the No. 1 rushing defense in the league and a wide receiving corps that hasn’t reached its potential just yet. Keep an eye on rookies Skyy Moore at wide receiver and Isiah Pacheco at running back. Both could play larger roles as the Chiefs continue to march through the regular season.

The Chiefs have been contenders ever since Mahomes took over the starting job, and even with the loss of Tyreek Hill, that has not changed in 2022.

I was fascinated by this Dolphins team before the start of the season, and I’m even more fascinated now. While the Tua Tagovailoa concussion turmoil is dominating headlines in Miami, we can’t ignore how impressive this team has been through four weeks. The Dolphins are No. 10 in total offense, and Tagovailoa leads the No. 3 passing offense in the league. Tyreek Hill and Jaylen Waddle are a dynamic duo, as Hill leads the NFL in receiving yards with 477, and Waddle ranks sixth with 381 yards. They’ve combined for five total receiving touchdowns.

New head coach Mike McDaniel has brought a breath of fresh air to this franchise, although I did expect the run game to be better. McDaniel is one of the best run schemers in the world, but Raheem Mostert and Chase Edmonds haven’t found a ton of success just yet. Maybe that’s something that improves as the year goes on.

Defensively, the Dolphins have not been great. Free-agent signing Melvin Ingram has shown up in spots, the versatile Jevon Holland is fun to watch and Jaelan Phillips has flashed at times. If this unit can find more consistency — especially when it comes to defending the pass — then the Dolphins have a pretty high ceiling.

The AFC East throne may be reserved for the Bills, but the Dolphins are a team to keep an eye on with the amount of weapons around Tagovailoa, and with a legitimate Coach of the Year candidate.

I was truly torn on this one. The Cowboys have a reputation for disappointing once meaningful football is played, but is it possible the top two teams in the NFC reside in the East? It’s hard to believe compared to where we were two years ago, but that may be the truth.

Shoutout to Cooper Rush, who is the fifth quarterback in the last 15 seasons to start his career 4-0 or better. I’m not saying there’s a quarterback controversy in Dallas, but he has the Cowboys offense looking much better than it did under Dak Prescott during those first few quarters of the season against the Tampa Bay Buccaneers. This is “America’s Team,” and they are a magnet to negative outside noise. The talking heads are going to go wild once Prescott throws that first interception when he returns.

Through the first few weeks, it’s the Cowboys defense that has stood out to me. The Cowboys have allowed just 15.5 points per game, which ranks third in the NFL, and own the second-highest pressure rate this season. DeMarcus Lawrence and the defensive line have been dominant, Micah Parsons looks like a Defensive Player of the Year favorite and Donovan Wilson is a rising star.

Good teams win and great teams cover. The Cowboys have done both, as they have won five straight road games, and covered the spread in each one. They are an NFL-best 16-5 against-the-spread over the last two seasons — and if you’re not a gambling person, that basically just means that Dallas has exceeded expectations. I don’t think the Cowboys are destined to hoist the Lombardi trophy this year, but in the weak NFC, they are going to have a shot to make a run.

I think Kevin O’Connell was a great hire and Justin Jefferson is the best wide receiver in the NFL. Still, the Vikings aren’t yet ready to contend. While Dalvin Cook is again going to have to fight through a lingering shoulder injury this season, the struggles on defense are why I’m not high on Minnesota.

The Vikings are 25th in defense EPA (-2.9), 27th in yards allowed per game (394.5) and 26th in yards per play (6.0). This team was simply out-matched by the Eagles in Week 2, let the Detroit Lions jump out to a 14-0 lead over them before pulling off a fourth-quarter comeback in Week 3 and then allowed Andy Dalton and a New Orleans Saints team that did not have Alvin Kamara or Michael Thomas to stick around in London. The Vikings are a solid team, but I do not see them as a contender.

The Packers have won 13 games in each of the last three seasons, but they are 2-3 in the playoffs during that span. They have been defeated in the NFC Championship game twice in the last three seasons, and last year, were upset by the 49ers as the No. 1 seed in the NFC. This offseason, the Packers offense lost a huge piece in star wideout Davante Adams, which still gives me pause when it comes to evaluating their ceiling in 2022.

The Packers have the No. 6 offense in the NFL entering Week 5, although that is in large part due to Aaron Jones (408 scrimmage yards) and A.J. Dillon (280 scrimmage yards). Green Bay actually has the No. 16 passing offense in the NFL, as the Packers average 232.5 passing yards per game. The Packers are also averaging just 18.8 points per game this season, which are the fewest points they have averaged through four contests since 2006! It ranks No. 21 in the NFL.

I will say that I really like this Packers defense, and they will be the reason Green Bay repeats as NFC North champions. At receiver, Allen Lazard is serviceable and I’m excited what Christian Watson and Romeo Doubs are capable of, but Aaron Rodgers is missing that clear No. 1 wideout that he can rely on heavily when it comes to orchestrating a game-winning drive. The Packers will make the playoffs, but how much of a threat are they, really, to win a Super Bowl? If they sign Odell Beckham Jr. then I’ll switch them from pretenders to contenders.

You have to credit the Giants for their impressive start in 2022. I think it’s one of the headlines of the NFL season thus far. New York is 3-1 through four games for the first time since 2011, when it won the Super Bowl. Brian Daboll is the first Giants head coach to start 3-1 or better since Tom Coughlin did so in 2004. Saquon Barkley is the main reason for the Giants’ early-season success, as he leads the NFL in rushing with 463 yards. Additionally, the Giants are leading everyone in rushing with 770 yards.

There are still questions around quarterback Daniel Jones, the offensive line and of course the wide receiving corps. Unfortunately for the Giants, they are the third-best team in their own division, which means they fit into the “pretender” category here. With that said, the Daboll hire looks great, and this franchise is on the right track.