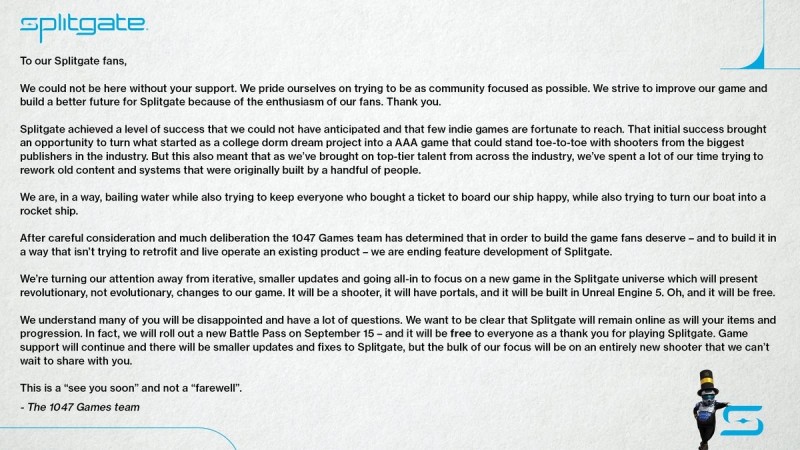 Fans of Splitgate, the sci-fi multiplayer shooter with portals, received some bittersweet news today. Developer 1047 Games has announced it’s finally bringing the game out of its lengthy beta and launching it in 1.0 next month. It also revealed plans to create another title within the Splitgate universe. But to facilitate work on this next project, it will cease feature development of Splitgate.

1047 explains in a press release that it’s developing a new shooter in Unreal Engine 5 set in the world of Splitgate, which means it will also feature portals. There aren’t any more details beyond this, but it will be the team’s full-time project going forward.

As such, 1047 is launching Splitgate out of beta on September 15, but it will move away from creating substantial content after that. However, the team assures fans that Splitgate will remain online. The game’s launch will kick off a new season, which includes a new, free battle pass featuring an infinite number of levels along with new characters, skins, and other goodies. Splitgate’s weekly featured playlists, and item drops will continue, and the team will still work on smaller fixes and updates.

You can read 1047’s full statement below (click to enlarge):

Splitgate launched in PC beta in 2019, but the game really caught fire when its console beta began in 2021. The game became so popular on PlayStation and Xbox that servers regularly became congested, to the point that 1047 decided to postpone the full launch and keep the game in an indefinite beta to focus on further stabilizing the online infrastructure as the project continued to receive more funding. Season 0 began last August, adding a new map, game mode, and other features.