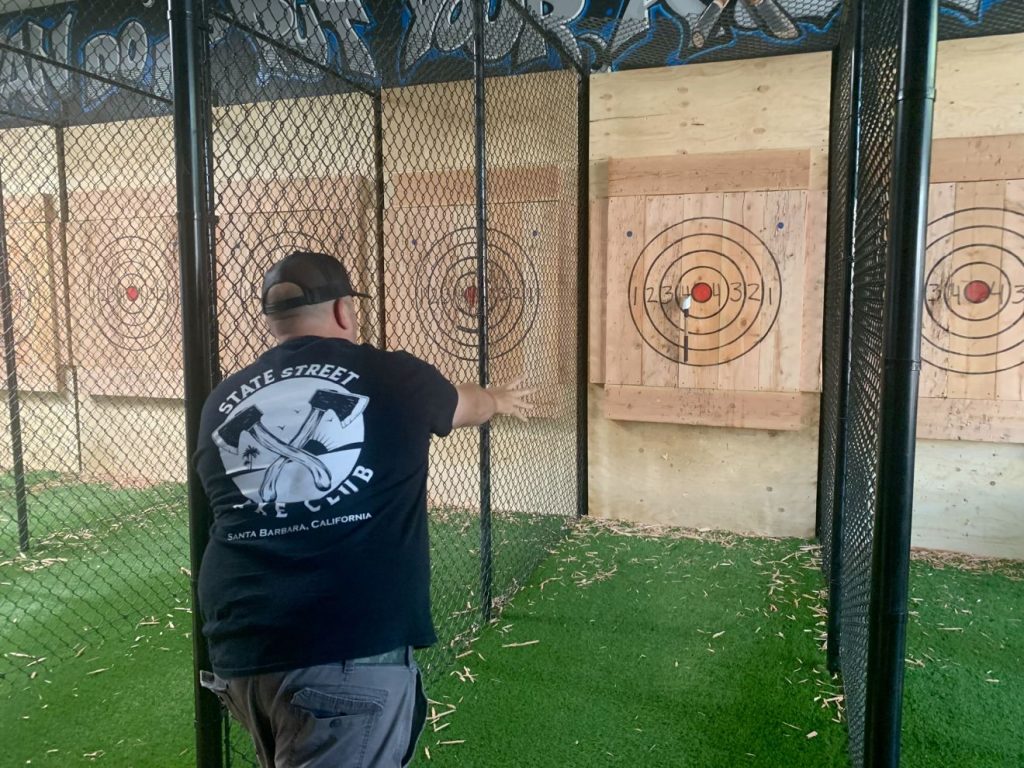 The entrepreneur launched the State Street Axe Club at 427 State St. with a soft opening last week, and a full opening this week, after more than two years of trying to open a business during the COVID-19 pandemic.

The wait, however, appears well worth it.

“This town needs entertainment,” Michaelson told Noozhawk. “People want something to do at night for fun. They don’t just want to sit around and go to the bar again.”

In an innovative yet simple concept, customers can throw axes at dartlike wooden targets. That’s it. The appeal, however, is both primal and creative. One Internet search reveals that axe throwing is a growing trend, perhaps even hotter than pickleball and smash rooms.

The cost is $35 an hour for a throwing lane for a person. Participants have to sign a waiver just in case something goes awry, but that’s not likely with Michaelson and his eager-eyed staff monitoring every throw.

They will even provide a primer on how to throw. “Hold it like a baseball bat, dominant hand on top,” Michaelson said.

There are two ways to throw, but like any good athlete, each person will have to figure out their own style. Two hands over the head and thrown foward (don’t flick, though, just release), is the most popular style. Or, like this reporter, the one-handed throw, like a short-armed baseball pitch, can also result in a bull’s-eye.

The place booms with loud music, a mix of 1980s pop, hip hop, alternative and classic rock. On Tuesday afternoon, shortly after the business opened, a steady stream of people walking by stopped to peer inside, many of them surprised that Santa Barbara has a place to throw axes.

Among the customers on Tuesday were Richard and Hope Wood, tourists from Fresno who Googled “axe throwing” and found the Santa Barbara business.

“This is the first time we have ever thrown axes,” Richard Wood said. “Ten stars out of five.”

On Wednesday, he said, he and his wife were going to get tattoos. The axe-throwing, however, was the vacation highlight in Santa Barbara.

It may be fun, but it is also serious business. There’s no drinking allowed, and although other axe-throwing clubs allow alcohol, Michaelson said he has no plans to apply for any kind of liquor license.

He helped launch an axe-throwing business in Los Angeles. He went to UCSB and had a vision to open a business downtown.

He first threw an axe about three years ago. He became addicted. He said his biggest piece of advice for new axe-throwers is, “Don’t overthink it.”

“This is something different and a lot of fun,” he said. “It’s a great way to let out a lot of stress after a tough day.”

“But if people keep coming in, I will stay open,” Michaelson said. “Santa Barbara is beautiful. We have the beaches, we have amazing food, boutiques, handmade items, but we need more entertainment.”

— Noozhawk staff writer Joshua Molina can be reached at .(JavaScript must be enabled to view this email address). Follow Noozhawk on Twitter: @noozhawk, @NoozhawkNews and @NoozhawkBiz. Connect with Noozhawk on Facebook.