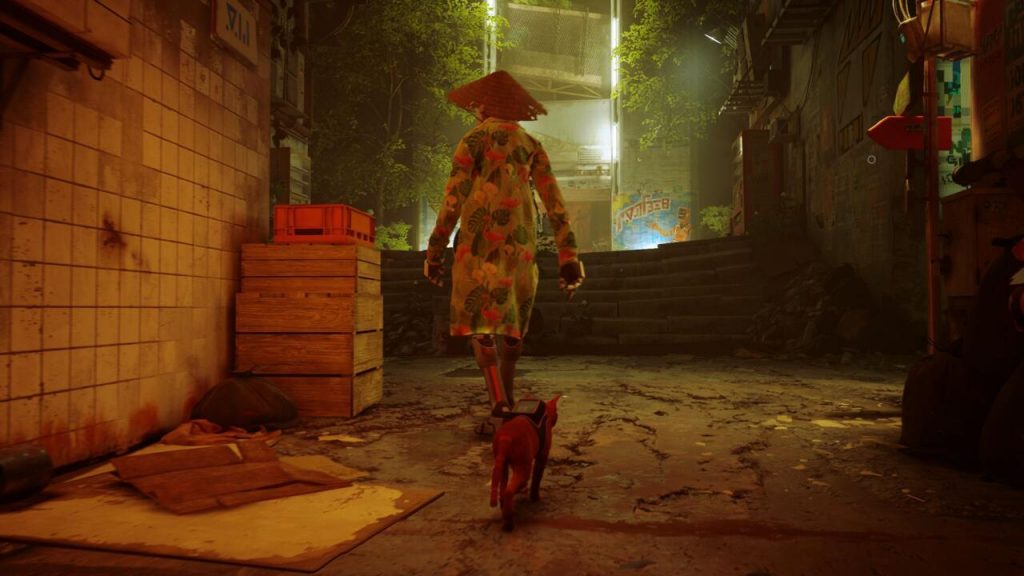 It’s rare for a game to offer a wholly new perspective for how we can experience a familiar setting, and rarer still for one to so confidently have all of its mechanics designed around it. Stray, an adventure-puzzle game where you play as a cat, manages not only to delight in its presentation but also in the many ways it eschews common puzzle mechanics to focus on the abilities and limitations of its protagonist. It’s a consistently satisfying adventure with a charming story about companionship that rarely misses a beat across its well-paced runtime.

You play as a stray cat that is quickly thrust into an entirely world underneath your own after a mishap that occurs in the opening minutes of the story. Alone in this neon-soaked city that’s beneath a giant, unmoving dome, you quickly befriend a small drone that becomes a trusted companion throughout your adventure, and a vital translator for all the other sentient robots that inhabit the handful of regions you’ll visit. This drone, called B-12, also gives you more options to interact with the world around you, such as being able to hack doors to open them, kill dangerous flesh-eating aliens with a beam of purple light, or illuminate dark and dreary avenues as you explore them.

Outside of the assistance from B-12, however, Stray fully embodies the abilities that being a cat would afford you in this situation. You’ve got a lot of mobility to get around, with contextual button presses on reachable surfaces letting you effortlessly jump up, down, and around pretty much anywhere you’d like. This approach allows each leap to look incredibly good, too, with detailed animation work making your movements look as natural and ballet-like as most cats do when navigating their environment.

You can chain together these actions which makes platforming feel fast and fluid, providing a nice rush of momentum as you hold down the jump button and rotate the camera around to guide yourself along a string of leaps. There are rare instances where you can accidentally jump away from where you initially intended, and others where coming down from a high perch can be a bit more troublesome than getting up because of how you need to rotate the camera to see a platform to jump to. These moments, however, are fleeting enough that it hardly breaks up the thrill of being able to so easily get around.

Throughout Stray you’ll alternate between small hub areas that you’re free to explore and more linear, focused portions, and both highlight your abilities in different ways. The verticality of the hubs help you understand the limits of how high and how far you can jump, while also offering neat secrets to find as you start exploring small routes that only a cat would likely be able to navigate. Linear portions are usually focused on speed, requiring you to start chaining together jumps while also challenging your understanding of what is and what isn’t feasible given your small size. The ebb and flow between these two types of play gives Stray a delicately balanced pacing that allows it to introduce new tools for B-12 or new enemies to circumvent while never letting either overstay their welcome, as well as letting you enjoy the freedom of moving around its world at your leisure when things simmer down.

Your mobility is key to solving Stray’s many puzzles. Most of them rely on identifying a path to an objective, either through a series of jumps or constructing a path with the jumps by moving various elements around the world to create one. In other instances, you need to find objects to wedge into the blades of fans so you can pass through or use your claws to pull down parts of the environment to expose a new pathway to platform up. Most of Stray’s puzzles are contained within small areas, which makes finding the solution relatively straightforward. They’re never too challenging, but also not trivial, so solving them is consistently satisfying. In later stages, more complex scenarios involve some light stealth and dexterous movements around a space, which come at the right time as by then you’ll have a firm grasp of how you’re allowed to move about Stray’s world.

There are a handful of set pieces that aren’t as enjoyable, however. These mostly occur in the first half of Stray’s adventure, and usually involve having to circumvent groups of enemies that quickly jump and latch onto you in numbers to bring you down. It’s not so much that the puzzles involved with these creatures are poorly designed, but rather that they often require you to run around awkwardly avoiding these enemies, rather than giving you strategic ways to deal with them. This is compounded by the fact that these enemies sometimes can jump far higher than you were previously led to believe, making the safety of vertical perches feel inconsistent. There’s only a handful of these sections, but there’s no doubt that they’re the weakest in the journey.

Stray’s distinct hubs are usually introduced after these disappointing sections, with each one packed with rich detail despite their relatively small sizes. There are numerous robotic inhabitants to chat to (if only by proxy through your drone companion) and smaller side stories to uncover, many of which fill in the gaps of the core narrative concerning a world that has not seen humans for thousands of years. Touching moments between several characters do a great job of supplementing the core theme of companionship through the lens of these sentient AI discovering familial traits all on their own, while also dissecting the lack of empathy their makers must have had to let things get to the state in which you find them. It’s delicately told and culminates in a satisfying conclusion that doesn’t leave any questions lingering, but instead lets you reflect on the relationships you made along the way with warm fondness.

The hubs themselves are also visually striking, with a high level of detail packed into their construction. The neon signage that punches through the darkness illuminates every crevice with bright, colorful lighting, accentuated by eye-catching reflections bounced by puddles on the streets. Shops and stalls all have distinct designs that you can pick apart by navigating around them, whether it’s simply from the low angle of the diminutive feline protagonist, or atop shelves where there are many obstacles to push out of your way onto the floor. Outside of the city districts, cold and damp sewers are appropriately unwelcoming and off-putting, with some surprising elements that sometimes make Stray feel like it’s bordering on becoming a horror game. Each new area you are introduced to is immediately captivating to wander around in, and I enjoyed spending a long time picking them apart.

Stray’s ultimate strength is how well its overall design embodies the unique perspective and capabilities of its protagonist, but it also doesn’t rely on this to be the only distinguishing feature of the entire adventure. A lot of the enjoyment throughout Stray’s runtime comes from how well each scenario is designed for the abilities of its feline hero, and how empowering it is to be able to navigate its gorgeous hubs and derelict cities with the additional agility on offer. Its puzzles are routinely satisfying to solve and all work in service of a charming story with a satisfying conclusion, with the pacing only knocked slightly off by some slightly less than stellar combat scenarios in the first half. Thankfully, they’re not prevalent enough to detract from the otherwise captivating adventure that Stray is, and that it tells a tale that will likely linger with you after the game’s credits have rolled.

You play as a stray cat that is quickly thrust into an entirely world underneath your own after a mishap that occurs in the opening minutes of the story. Alone in this neon-soaked city that’s beneath a giant, unmoving dome, you quickly befriend a small drone that becomes a trusted companion throughout your adventure, and a vital translator for all the other sentient robots that inhabit the handful of regions you’ll visit. This drone, called B-12, also gives you more options to interact with the world around you, such as being able to hack doors to open them, kill dangerous flesh-eating aliens with a beam of purple light, or illuminate dark and dreary avenues as you explore them.