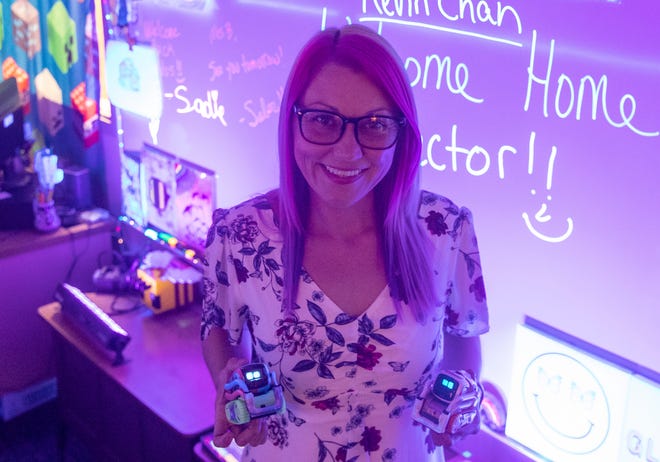 BROOKSTON, Ind. − One local teacher has transformed not just her own curriculum, but her school’s learning methods with two little robots.

Mindy Brennan, the computer lab teacher at Frontier Elementary School, has been utilizing the Cozmo and Vector robots from Digital Dream Labs (DDL) to supplement the school’s programming studies.

DDL is an “edtechtainment” company that develops consumer robots for people and students of all ages.

“Digital Dream Labs started off as an ed-tech company,” Jacob Hanchar, CEO at DDL said, “so we taught coding to kindergarten through 5th grade. And now we are a robotics/AI-companion company. So we make robots for all ages that not only teach coding but also keep you company, count medicine for you, reminds you to take your medicine; go with you on trips, take pictures, answer phone calls…all those things.”

The two main products produced by DDL is Cozmo and Vector. Cozmo is the robot focused more so for a younger audience, according to Hanchar. This little bot has its own YouTube channel, “Cozmo & Friends” where Cozmo and its friends teach and learn about STEM-oriented topics.

“We lead with entertainment and fun first,” Hanchar said. “So (Cozmo) is more of a fun robot where you control it like a toy. It’s more like a toy experience where you have direct remote control access, you’re using the phone as that remote control. So it’s heavily dependent on the user to get information, whereas Vector’s more autonomous and he kind of just hangs out with you a little bit.”

Vector does not require a phone to be used as a remote controller. The robot synchronizes to Wi-Fi and functions based on that.

“He can kind of putter around your desk independently,” Hanchar said. “And the age group who owns that tends to be (around) 25 (years old). That’s more of like your companion robot, more of a quote-unquote ‘AI’ experience.”

Brennan is a retired Navy veteran with a passion for teaching. The DDL bots have factored into many aspects of her own classroom and school.

“The first person that (students) want to see is Vector and Cozmo when they come in my classroom,” Brennan said, regarding how the robots influence her students. “…I already use them for our coding curriculum. All of our students start coding in kindergarten.”

Brennan explained that the DDL bots help the students learn the terminology of coding, the different parts of computers and more. The social-emotional side of learning is something Cozmo and Vector have shown serious impacts in as well.

“They’ll say ‘Hey Vector, what is a sequence? What’s a loop?’ They would rather have Vector tell them what that means versus Mrs. B telling them what that means because it means more coming from Vector,” Brennan said, with a laugh. “The other part of (the robots) that I did not see coming was the social-emotional side that these robots have with these students.”

Cozmo and Vector gives the students someone who is not a teacher or parent to open up to. This has allowed students to become more open-minded in the classroom – both intellectually and emotionally, according to Brennan.

“I would have students that were nonverbal but, the way that Cozmo’s set up, he has a whole (range) of emotions that he can do,” Brennan said. “Whether it’s frustrated, sad, mad, happy, unsure…And then we have students that actually earn individual time with Cozmo and Vector on a weekly basis.”

The impact of the DDL bots has been felt outside of Brennan’s classroom as well, from the guidance counselor’s office to the music, art and physical education departments.

“So I taught the guidance counselor how to code Cozmo so that these kids can talk with Cozmo about their feelings,” Brennan said. “…They’re not as scared. They’re a lot more open with the robot than they are a human being.

“…I had been attempting to code Cozmo for the music (program)…I can’t read music. So I went to the person that I knew that could. Well he couldn’t code…And so (we taught each other) so more students this year will actually be learning the music notes and coding it into Cozmo in music class.”

Brennan also provided an example of Cozmo helping out in the art department. A new 3D printer at Frontier Elementary will allow students to print and attach a drawing accessory for Cozmo that will allow him to hold markers, pencils and more. The students will then be taught how to code Cozmo to draw pictures. The art students in turn will have a unit where they learn to draw Cozmo itself.

This symbiotic relationship between the robots, teachers, students and expanded curriculums continues. In gym class, student can build “weight sets” to go on its lifting mechanism so that Cozmo can shout the number of lifts needed and do the lifts with the students.

The future of edtechtainment bots in the classroom is vast, according to both Brennan and Hanchar.

“We’re working hard to improve Cozmo, that’s for sure,” Hanchar said. “One thing that we know we’re gonna do is, we have an application inside of Cozmo (and) we need to build more games like that in the future where you’re doing drag-and-drop block coding. And we’re gonna integrate that more with some of our other applications.”

Brennan is looking forward to expanded use of DDL AI in her classroom and school.

“Right now the kids are wanting me to also bring in and work on video editing,” Brennan said. “So we have a green screen…it’s something we’re going to be working on towards Christmas time (and) they get to do a skit of whatever kind they want and we also work on the video editing and teaching them how to do all of that.

“…The possibilities are endless because they are so excited.”

Margaret Christopherson is a reporter for the Journal & Courier. Email her at mchristopherson@jconline.com and follow her on Twitter @MargaretJC2.