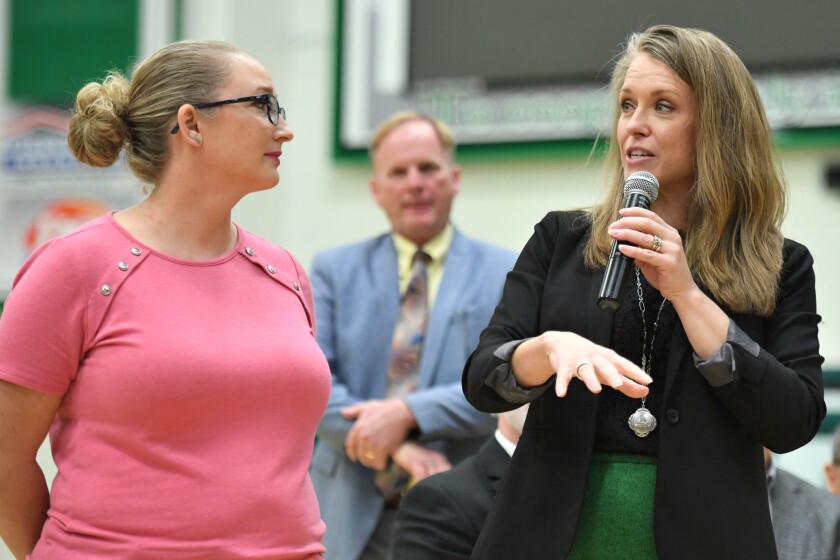 Jason Connelly is exactly the kind of young educator the South Dakota public school system would love to add to its depleted teacher workforce.

Connelly grew up in Sioux Falls and attended Catholic schools before pursuing a history and teaching degree at Augustana University, which he obtained this year.

And yet, Connelly recently told News Watch that “South Dakota is not on my radar for teaching positions.”

Instead, Connelly is turned off by a new assault on public education in South Dakota — an increasing politicization of education, heightened criticism of what is taught and how, and the influence of the ongoing culture wars. The scrutiny has created a new source of stress and disillusionment among new and veteran classroom teachers.

Teachers across the state have watched as lawmakers have tried to regulate how transgender students are treated in sports and their use of bathrooms. They have seen Republican Gov. Kristi Noem ban the teaching of critical race theory, even though it is not taught in South Dakota public schools and rarely if ever in state universities.

They saw the state Department of Education make last-minute changes that removed references to Native American culture and history in social studies standards that were developed over several months by a group of nearly 50 interested citizens. They noted how the second-largest school district in the state sought to ban and destroy books that some administrators found offensive. And they have felt increased pressure from parents, administrators and school boards to influence how and what they teach or even how their classrooms are decorated.

Connelly and some education experts in South Dakota say teachers have increasingly felt the pull of politics and government interference in the classroom, and it has made a challenging job almost unbearable for many.

During his time at the school, Connelly said he saw increasing concern among teachers that they weren’t trusted — or that they were even seen as trying to influence students in negative ways.

That increasing stress is being fueled by political rhetoric at both the state and local levels that questions the intentions and even the morals of classroom teachers, Connelly said.

“I definitely do think it is political, and I think that their fears are unwarranted,” Connelly said. “No teacher is trying to indoctrinate students one way or the other. If we were going to indoctrinate them, it would be to get their homework done first and foremost.”

Some experts in the South Dakota education system say that if the criticism and micromanaging of teachers continues, and K-12 education continues to be politicized, the very fabric of public education in the state, and indeed across the nation, may begin to unravel.

“At this point, I fear for all of public education,” said Rob Monson, executive director of the School Administrators of South Dakota, an umbrella association of public school leaders. “The continual attacks we’re seeing are a detriment to our profession and what we can provide to students. In my humble opinion, this country was built on public education and we’re a successful country because of public education. If we ever lose that, we’ve lost it all.”

Some recent estimates put the number of open teaching positions in South Dakota at more than 500, well above previous years and a clear indicator of an extreme shortage that is affecting school districts in urban areas and small towns.

South Dakota Secretary of Education Tiffany Sanderson said in an email to News Watch that, “I deeply appreciate and admire South Dakota teachers. They devote their professional lives to instructing, encouraging, and inspiring our young people to be their best.”

Sanderson added that the state is taking steps to recruit and retain teachers through programs that encourage high school students to take an interest in teaching. The state, she said, is also offering flexibility in how teachers are certified and reciprocity that allows teachers from other states to easily transition into South Dakota.

And yet, such efforts may fall short if teachers continue to feel as though they are under attack and must endure increasing stress from outside the classroom.

After more than 40 years working in public education in South Dakota, Sharon Andrews has never seen such a hard time to be a teacher.

Andrews was a public school teacher early in her career, and has spent the last 33 years at Augustana University, where she is an associate professor of education and director of the Teacher Education Program.

South Dakota has long faced challenges in attracting new teachers, Andrews said, mainly due to low pay compared with neighboring states, the high number of rural districts and large class sizes. Upheaval during the COVID-19 pandemic and remote teaching added new stresses, and now some teachers are feeling less safe in schools due to shootings and other violence targeted at schools, teachers and students.

But the recent criticism of public education and political rhetoric regarding curriculum has added a new, additional deterrent to those considering teaching.

“It seems like the focus is so far off where it should be,” Andrews said. “We should be more focused on good pedagogy and class size and learning.mIt’s almost a culture of fear on some level, and I guess I really don’t know what people are so afraid of.”

The loss of local control, or even the perception of that loss, has been a growing factor in education since the early 2000s when the federal government enacted the No Child Left Behind standards and has continued ever since, according to longtime educator Jacqueline Sly of Rapid City.

Sly, 74, spent 37 years as a classroom teacher before retiring and serving four terms as a Republican member of the state House of Representatives and almost five years on the South Dakota Board of Education Standards.

Sly said the situation is reaching a crisis level in South Dakota because fewer students are studying to be teachers and many who enter the field do not stay long.

“I think that the undermining of public education is a great fear,” she said. “In the long run, I’m thinking about my own grandchildren; who’s going to teach them?”

Several incidents have made news in South Dakota recently regarding freedom of expression by classroom teachers or criticism of what takes place within public schools.

In May, a school board candidate in Rapid City sent out a four-page letter referring to “woke” teachers as “tyrants of the teacher’s lounge” who forced students to wear masks and espouse “anti-American leftist propaganda.”

Janyce Hockenbary sent the letter to potential voters, saying she was running for school board because “our schools have become sex education centers with a side of communism to boot.”

The letter came out around the same time the incumbent school board in Rapid City considered removal of several books from use in classrooms that some administrators found objectionable. The books were targeted for destruction rather than for reuse elsewhere.

In Wessington Springs, the school board has seen controversy arise over a math teacher who placed an “ally” magnet with rainbow colors on it in her classroom. The magnet was intended to indicate to students that they were welcomed and accepted regardless of their gender identity or sexuality. The teacher was forced to remove the magnet.

In Deadwood, the school board has begun consideration of new rules to determine what, if any, decorations should be allowed in classrooms. The proposed policy came after a counselor posted a “Safe Spaces” sign with rainbow colors in her classroom.

— This article was produced by South Dakota News Watch, a non-profit news organization online at sdnewswatch.org.