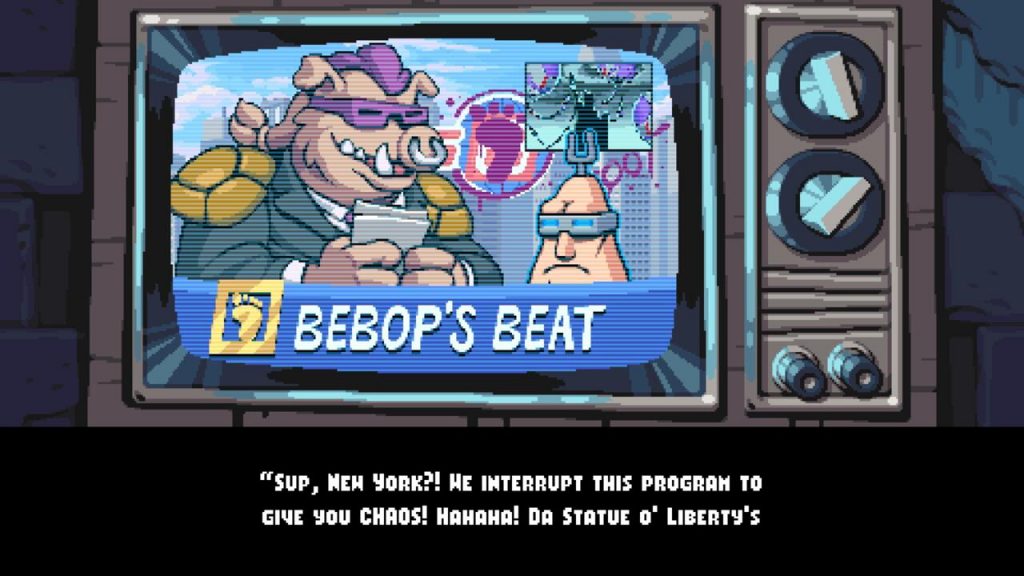 Teenage Mutant Ninja Turtles: Shredder’s Revenge is fueled by the power of nostalgia and (presumably) dozens upon dozens of slices of New York pizza. 1992’s Turtles in Time is one of the most beloved Super Nintendo games of all time, arriving at a time when the Heroes in a Half-Shell were at the peak of their popularity. It’s clear that the beat-’em-up connoisseurs at developer Tribute Games have a deep reverence for both that game and the Turtles of the late ’80s and early ’90s, because Shredder’s Revenge is essentially a sequel 30 years in the making. It faithfully re-captures what made Turtles in Time such a cherished brawler, all while introducing a few new ideas to freshen up the classic 16-bit gameplay for a modern audience.

If you’re a fan of Turtles in Time, you’ll feel right at home as soon as Shredder’s Revenge begins. The opening cutscene sees the anthropomorphic brothers gathered around an old CRT TV watching a news report that’s interrupted when a few of their notorious adversaries attack the Statue of Liberty. It’s not exactly the same as Turtles in Time’s opening, but it’s very close. Once you hop into the first level, this feeling of familiarity doesn’t wear off. The level introductions feature the same silhouette of the boss you’ll be facing, and if you’re playing as either Leonardo, Donatello, Raphael, or Michelangelo, you’ll notice that their abilities and combos have been faithfully adapted from their adventure in ’92. Chaining together attacks is more fluid than it once was, but you can still perform a plethora of recognizable moves, from barreling enemies over with a running shoulder charge to canceling a dodge in order to launch into a slide kick. You can even grab Foot soldiers and toss them right at the camera.

Playing Shredder’s Revenge feels like playing Turtles in Time–or, at least, how I remember it in my mind’s eye–but there’s still fun to be had even if you don’t possess any of that potent nostalgia. It’s still very much inspired by the beat-’em-ups of the era–including the earlier Turtles games released for the NES–with its fast, arcade-style action seeing enemies arrive on screen just as quickly as they’re vanquished. There’s a ton of enemy variety, too, which often forces you to diversify your offense to get behind a shielded foe or dispatch a flying nuisance. Defeating most of the bosses is a matter of learning their attack patterns and knowing when to dodge and when to inflict damage. A few of these end-of-level obstacles are more involved, though, such as the Rat King, who will jump out of harm’s way and summon swarms of rats for you to evade. It’s all relatively simple, but there’s some depth beyond the surface with the likes of juggles and ground bounces, and the swift rhythm of the action is particularly satisfying.

Shredder’s Revenge also introduces a number of new features and a few quality-of-life improvements as well. Each character has a unique super attack that lets them deal a ton of damage for a couple of seconds. Rather than having to sacrifice health to utilize these attacks, you now have a charge meter that fills up as you do damage. If there’s a respite in the action, you can also taunt to fill up the meter, which sees Donatello pull out and play a Game Boy while Michelangelo dances on the spot. These add moments of character, aside from the obvious gameplay benefits. You also have a charged heavy attack that’s useful against shielded enemies and quick foes that have a habit of dashing across the screen. If you’re playing co-op–which supports up to six players either online or locally–you can high-five each other to share health, and you’ll also enter a downed state if your health bar is depleted, giving your teammates a brief window in which to revive you with the rejuvenating power of pizza.

Co-op represents Shredder’s Revenge at its most chaotic. I played with three friends and that was manic enough, so a six-player game must be absolute carnage. This is mainly because the game adapts depending on how many players there are by throwing more Foot soldiers into the mix. Keeping track of where your character is might be the hardest part considering how much is happening on-screen at any given time, and there were multiple occasions where I found myself attacking nothing at the side of the screen because I thought I was somewhere else. Playing as either April O’Neil, Splinter, or the unlockable Casey Jones makes this slightly easier since you don’t blend in with the Turtles quite as much. Embracing the chaos is the best way to go, though, and ultimately, it doesn’t significantly deter from how much fun it is to play with friends. The only time this isn’t the case is during a couple of levels where you’re riding a Turtle’s hoverboard. Since you’re constantly moving forward, dodging obstacles proves overly difficult when you can’t tell what’s going on, making these levels fairly frustrating. This isn’t an issue when playing solo, just during co-op when the screen can get exceedingly busy.

Most of the levels are fantastic, however, being both varied and full of amusing details. The first level, for instance, sees you chasing Bebop through the Channel 6 News studio. One of the running gags in Shredder’s Revenge is centered on how bad the Foot Clan is at blending into the environment. As you move through the TV studio, you’ll see them typing away on computers, churning a cake mixture on the kitchen set, and emerging from an industrial freezer with frozen hams that are now handy projectile weapons. Meanwhile, another level sees you fight your way through a mall where Foot soldiers are walking through the food court with burgers and fries and playing games in the arcade. It nails the tone and fun-loving personality of the late ’80s and early ’90s Turtles. The colorful 16-bit aesthetic is also a treat, and the excellent music sounds like it was ripped straight from the era.

You can easily finish Shredder’s Revenge in around two and a half hours, which is definitely on the short side, but there is a decent amount of replayability. The game has two different modes: Story and Arcade. The former features an overworld and an incentive to replay levels in order to complete challenges, find hidden NPCs, and finish fetch quests, which boils down to hitting every obstacle inside a level to unearth these hidden secrets. This isn’t engaging in any way, but doing so will reward you with points that feed into a light progression system that increases your health bar, unlocks new moves–like diving special attacks–and more. Arcade, on the other hand, dilutes the experience down to the fundamentals. You can’t save and only have a limited number of lives, so you need to complete the whole game in a single run without dying too much. You know, like the old days. Playing through the game multiple times also gives you a chance to try out all of the playable characters. Each of the six has a trio of stats (range, speed, and power) that makes them feel distinct. Donatello and his ranged bo staff, for instance, feels noticeably different compared to the slow, hard-hitting Shredder or the speedy Michelangelo.

Whether you’re able to extract more playtime out of Shredder’s Revenge or not will depend on how willing you are to replay levels with other characters and on higher difficulty levels. Despite its brevity, however, this is still a tremendous labor of love that lives up to the legacy of Turtles in Time and the brawlers that came before it. Combat is fast-paced and simple yet satisfying, while new features help modernize the action without tampering with its 16-bit essence. Co-op is overly chaotic and could use some indicators to help you keep track of where you are, but playing with friends is still a blast. Rehashing a classic retro game is always a tough ask, but Shredder’s Revenge avoids the obvious pitfalls and successfully brings about a revival of everyone’s favorite mutant turtles.